Knowing if there’s a timing chain versus a timing belt in your car, and what exactly they both do, can help you save on expensive maintenance, costly repairs or both. Although it might seem like an overly technical subject, understanding a timing belt versus a timing chain is a fairly simple concept to grasp once you strip away all the jargon. While they both perform the same function, their maintenance requirements are quite different.

What Is Engine Timing?

Your car’s engine needs to breath in air in order to burn fuel and produce power. Valves control the movement of gases in and out of the engine. Each cylinder has its own set of valves, some for taking in clean air, and some for expelling exhaust gases, designed to open and close at very specific intervals. Almost every modern engine has valves located above the piston housed within the cylinder head. This design is called an overhead valve engine. Older engine designs and even some current small engines house the valves inside the engine block adjacent to the pistons. This design is called a flathead engine. Now that you understand valves and where they live, it’s time to learn how they do their job.

“Engine timing” is the rate, duration and open/close time of each valve, and it requires a close link between the camshaft, which controls the valves, and the crankshaft, which is rotated as the pistons in your engine’s cylinders go up and down. Working together in harmony, valves and pistons will produce efficient power, but if things are off, they can physically bump into each other and cause significant internal damage. The design of the engine mostly determines if the pistons and valves can physically touch if things go wrong. For engines that leave plenty of space between the piston at the top of its travel and the valve when it is at its most open point, it is referred to as a “non-interference” engine. The valve will not interfere with the piston and vice-versa. But if the piston can strike the valve, it is referred to as an “interference” engine. That will be important to know later.

Timing Belts Hold It All Together 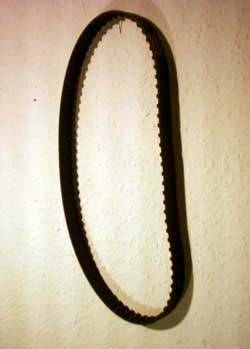 Enter the timing belt, which is a rubber belt that’s reinforced with a number of synthetic fibers linking the camshaft to the crankshaft. Timing belts are almost always have teeth so that they can grip the timing pulleys without slipping. Always in motion, the belt conducts the mechanical symphony in the cylinder head and makes sure no component gets out of sync. It also does its work with very little noise.

Unfortunately, wear can cause a timing belt to slack, stretch, or in some cases, even snap. The former will lead to an engine that’s not running at peak performance as valves miss their cues, while the latter can be a catastrophe if valves operate out of control and hit pistons at a high rate of speed. Specifically, an “interference” engine with a snapped timing belt will likely experience catastrophic failure almost instantly with no time to react. This is why each car has a specific timing belt change interval, which is usually about 60,000 miles, although in some cases it can be extended to 100,000 miles, before you have to change it out.

Timing Belt Versus a Timing Chain

A timing chain is a variation on the timing belt concept, but instead of rubber, the chain uses inflexible metal. Kind of like a reinforced bicycle chain. The advantages of a timing chain versus a timing belt include nearly zero maintenance, which is good for motors stuffed into tight engine bays where access to timing belts or chains is difficult. Some timing chains are good for the life of the car, but others will require eventual replacement, or at least the servicing of the timing chain tensioner, which serves to keep the system taut. While failure of the timing chain itself is uncommon, worn out timing chain tensioners are far more common. A worn timing belt tensioner can allow slack in the chain which may affect engine timing. In extreme circumstances the chain itself can actually skip to an adjacent chain cog tooth, throwing off the valve timing with possible destructive results.

Unfortunately timing belts and timing chains are not interchangeable, so you are stuck with whatever type is in the car. Engine block and cylinder head designs are very different when an engine is being designed for one system or the other. Most engines with timing belts keep them protected behind a lightweight cover which keeps out debris and liquids, including engine oil. Timing chains on the other hand normally live behind metal covers and are bathed in engine oil for constant lubrication. Advances in material technology allow some belts to run in engine oil, but the usage is not widespread yet.

Timing chains are a great substitute for belts, but they aren’t used universally. This can be due to packaging decisions under the hood, noise considerations or cost-saving measures by an automaker. Knowing which one you have in your car is as simple as asking your mechanic during the next service appointment, or just cracking open your vehicle’s manual. Whichever one you have it is important to follow the service schedule in your owner’s manual. If there are any signs of timing belt or timing chain problems don’t put off a repair. Damage to the valvetrain is almost always expensive and laborious to repair. If the vehicle is old or has high-mileage a damaged valvetrain may cost more to repair than it is worth. Be proactive for the sake of your car and your wallet.

Check out all the belts and hoses available on NAPA Online or trust one of our 17,000 NAPA AutoCare locations for routine maintenance and repairs. For more information on your engine timing belts and chains, chat with a knowledgeable expert at your local NAPA AUTO PARTS store.