If you’ve ever looked to boost your engine’s output, you’ve run across the words “turbocharger” and “supercharger.” While someone unfamiliar with automotive jargon may use these terms interchangeably, they are two distinct technologies — each with its own set of pros and cons. Make sure you know the ins and outs of both so you can make the final call in the turbo vs supercharger showdown.

Both turbo and superchargers facilitate something called “forced induction.” A naturally aspirated gas engine requires fuel, spark and air to run, with the air-to-fuel ratio needing to remain as constant as possible to keep things going smoothly. Fuel is pumped in by injectors, but air is brought in by a vacuum. Forced induction allows significantly more air to flow (get “forced”) into the system, at which point the ECU, or main computer, alerts the fuel injectors to send a matching amount of fuel. This near-simultaneous increase of air and fuel takes the power produced by the combustion process to another level.

The Power Impels You 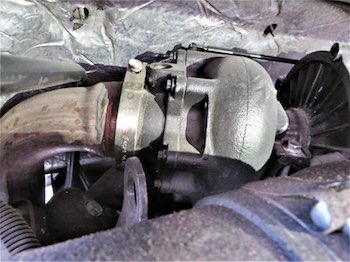 Turbochargers are placed inline in the exhaust system, just after the exhaust manifold. They use the force of exhaust gases to spin up an impeller, compressing the air and sending it back into the system for use. The word you always hear around turbos is “efficiency,” because they use what is otherwise waste gas that the engine produces and turns it into something to improve performance. For this reason — along with the fact that they can be added easily into existing systems or engineered alongside smaller engines to reduce overall weight — they are popular with manufacturers and aftermarket buyers alike.

The main drawback of turbos is that they take a moment to build the pressure needed for a boost. This is called turbo lag, and although recent advances in technology have reduced it greatly, it’s still an issue. The other downside is that they require engine oil to keep cool because they get very hot. On the one hand, this means less heat downstream at the catalytic converter, but on the other hand, it adds vulnerability for leaks and will require more frequent oil changes.

By contrast, superchargers use (mostly) pulley-driven engine power to run. This is less efficient because you’re taking power to make power, but the results are immediate. For drivers concerned with responsiveness and feel, superchargers are the way to go. Popular opinion suggests they sound a little better too. You don’t see them as much from manufacturers because they’re interested in designing vehicles with the highest possible fuel efficiency, but they don’t accumulate as much heat or require a supply of oil, so it could be argued they’re lower maintenance. In the future, we’ll likely see more electric-powered superchargers coming into use and leveling the efficiency playing field a bit.

In the end, the decision on which technology is better is largely based on personal taste and priority. If efficiency is at the top of your list, go for the turbo. If you’re more interested in drive feel and overall experience, consider a supercharger. The power is in your hands.

Check out all the engine parts available on NAPA Online or trust one of our 17,000 NAPA AutoCare locations for routine maintenance and repairs. For more information on a turbo vs supercharger, chat with a knowledgeable expert at your local NAPA AUTO PARTS store.

NAPA Know How Blog Under Pressure: Turbo vs Supercharger Showdown