Practically every drive shaft and drive axle is fitted with at least two flexible joints that enable engine and transmission torque to be transmitted at an angle. Ideally, torque would be transmitted in a straight line, but this would result in an extremely rough ride. 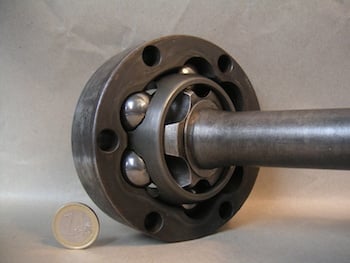 The universal joint transmits an average speed to the opposite end, but fluctuates speed every 180 degrees of rotation. This cyclic axial velocity variation generates a vibration, and the greater the angle, the worse the vibration. Keeping these angles low and using a second universal joint offset by 90 degrees makes for smoother operation, but cannot eliminate axial velocity variations and vibration completely.

On the other hand, a true constant velocity joint can transmit torque with zero angular velocity variation and near-zero vibration at greater angles than universal joints. Early CVJ designs included the double cardan joint (two combined U-joints), the Weiss joint, the tripod joint and the Tracta joint. The Rzeppa joint is most often found in front-wheel-drive vehicles at the wheels, since they allow for shaft angles up to 54 degrees. Because they generate little vibration, CV joints can be found on drive shafts and drive axles in all kinds of vehicles.

Friction is the biggest enemy the constant velocity joint has to face, in spite of its strength and stability. This is why Rzeppa and tripod CV joints are filled with grease and sealed in flexible rubber CV boots. Over time, exposure to the elements leads to CVJ boot cracks, which can allow vital lubricating grease to escape. More critically, cracks can allow water and dirt to enter the joint, which accelerates corrosion and wear.

Unfortunately, if worn boots are ignored or a boot is torn suddenly, all the grease may leak out, greatly increasing wear. Worn constant velocity joints are most often identified by a clicking sound that speeds up while you turn. If the wear is extreme, you may also feel a vibration that comes and goes at certain speeds.

Fortunately, regular maintenance inspections should reveal leaking CVJ lubricant, the first sign of worn boots. At this point, simply replacing the old boot and lubricant should be enough to restore the axle. If the CVJ has started clicking or vibrating, however, the only remedy is replacement. Here’s a replacement tip: be sure to use a new axle nut and torque it properly to protect the wheel bearing.

Check out all the drivetrain parts available on NAPA Online or trust one of our 17,000 NAPA AutoCare locations for routine maintenance and repairs. For more information on constant velocity joint maintenance, chat with a knowledgeable expert at your local NAPA AUTO PARTS store.

NAPA Know How Blog What Is a Constant Velocity Joint?