You’ve probably heard about a new kind of battery being used in late model cars and performance vehicle called an AGM battery. But what is an AGM battery? The absorbent glass mat battery (AGM) is a recent battery technology that is increasingly common in today’s cars. It’s an alternative to the well-known wet cell, or flooded, battery that has been in use for years. Read on to learn the difference between these battery types and why you might want to consider an AGM battery for your car.

What Is a Flooded Battery?

A flooded battery is the traditional type found in most vehicles. Inside these batteries there are thin lead plates and a solution of sulfuric acid and water. Car owners used to have to top off this water regularly, but many of today’s flooded batteries are sealed and don’t need this type of maintenance. A flooded battery does the job just fine and is the most common type of car battery around. But it does have limitations such as upright-only mounting options and the possibility of freezing solid if the temps drop too far (possibly cracking the battery case).

What Makes an AGM Battery Different?

An AGM battery still has the lead plates and the solution of sulfuric acid and water. The difference is an added spongy glass mat separating each plate. The glass mats press up against the plates, holding them firmly in place and allowing for more of them to be packed into one case. That’s where the AGM battery meaning comes from in an absorbent glass mat battery.

Since the liquid solution is held in the sponges, there’s never a need to fill these AGM batteries. This design also reduces the risk of spillage in the event that the case is broken or tipped on its side. AGM batteries are popular with off road enthusiasts who often find their vehicles at awkward angles (including upside-down) so a non-spill case is ideal. Resistance to vibration damage also makes the AGM battery attractive for racing. They are also popular with performance vehicle builders who have to get creative in mounting a battery.

AGM batteries are a newer technology, but that doesn’t make them better in every situation. Each type of battery has pros and cons to consider. 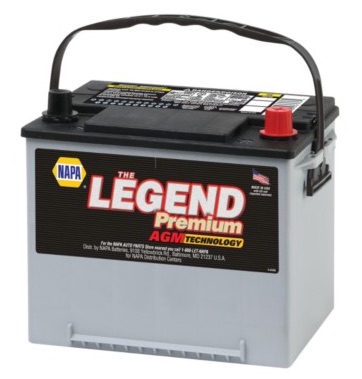 An AGM car battery is safer to handle since it won’t leak caustic fluids like a flooded battery, and it can have a longer lifespan. AGM batteries also have superior vibration resistance and superior performance under extreme temperatures. Additional electrical loads and other tough demands made on a modern vehicle electrical system are also handled better by an AGM battery. On the cons side, AGM batteries can be more expensive than traditional flooded batteries, which may put an AGM battery out of reach for people on a budget.

While both batteries can power your car sufficiently, be sure to find a battery that’s rated for your vehicle and fits securely in the engine compartment. Not every battery fits in every car, so do your research before you decide whether an AGM battery is the right choice for you. Dropping an AGM battery into your daily driver that didn’t have one from the factory takes a little research. While 12 volt AGM batteries basically work the same as a normal flooded battery, modern vehicles can be finicky. Some newer vehicles need to have the battery registered in the onboard computer system for precise charging and monitoring. Older vehicles without computers or onboard battery monitoring systems tend to be more forgiving of an AGM battery swap. On the flip side, if a vehicle was equipped from the factory with an AGM battery it must be be replaced with another AGM battery. A flooded battery cannot be used in place of a factory AGM battery.

Is Charging an AGM Battery Different?

While the basic chemistry for an AGM battery may be the same, how it handles charging and discharging is different.  The lower internal resistance of AGM batteries can give older battery testers and chargers a bad reading.  It is important to use the right type of battery charger to charge AGM battery types, ideally a modern smart charger. Slow charging and trickle charging are the best method for long AGM battery life. Keep it below 10 amps to prevent overheating the battery. Overcharging an AGM battery can lead to premature battery failure. A smart charger with an AGM setting can monitor the battery as it charges without the risk of damage.

What About Using A Deep Cycle AGM Battery?

Check out all the batteries and battery accessories available on NAPAOnline, or trust one of our 17,000 NAPA AutoCare locations for routine maintenance and repairs. For more information about AGM car batteries and picking the best AGM car battery for your vehicle, chat with a knowledgeable expert at your local NAPA Auto Parts store.

One thought on “What Is an AGM Battery?” Leave a comment ›

NAPA Know How Blog What Is an AGM Battery?