Potholes can seemingly come out of nowhere, and no driver is immune from the damage they can inflict. If you hit a pothole, you’ll know it right away, but the lasting effects of doing so might take time to appear.

How Do Potholes Form? 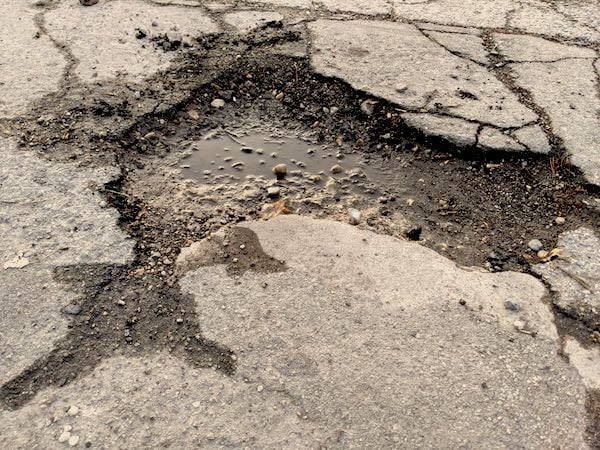 Potholes are created when water makes its way into cracks in the pavement and softens the ground underneath, allowing the road to cave in or crack further under pressure. Potholes are especially bad in northern climes with cold winters, where a combination of heavy plowing, snow-masking and the freeze-thaw cycle can cause existing cracks to widen, exacerbating the problem. But you can find potholes anywhere, and when you drive over one, you’ll want to know what to look for to make sure your vehicle hasn’t sustained damage that could put you in danger or cause problems later on.

The first point of contact between a pothole and your vehicle is usually a tire, and for that reason, tires and wheels often suffer the most. This might mean an immediate flat, but not necessarily. After parking in a safe location where you’re out of harm’s way, check your tires for signs of damage, which might include bulging or damage to the sidewall. Look to see if rims are bent, cracked or broken. Damaged tires could put you in an extremely dangerous situation if you experience an unexpected blowout while you’re driving, so be sure to repair or replace them immediately.

Other common victims of pothole damage include your steering and suspension systems. Components like suspension arms and tie rods can bend or break, and while shock absorbers probably won’t break after going over one pothole, they might wear out much faster. You can check to see how they’re holding up by doing a quick corner jounce test. Since pothole damage often occurs underneath your vehicle and might be a slight bend that’s hard to notice, suspension problems may be felt before they’re seen if they aren’t immediately severe, and they can worsen over time. Signs of this kind of damage may include tires wearing unevenly and steering that pulls to one side.

Check for Scrapes and Leaks

Speaking of damage where you might not see it, a deep enough pothole can also scrape or impact other components located in the undercarriage. The exhaust is one example — look for new dents and listen for odd new sounds coming from that area if you go over a deep pothole. Scrapes can compromise the ability of components to fend off rust, which could allow water and salt to enter, speeding up the oxidation process. Exposed lines are also potential pothole targets, as they can sustain cuts or punctures that cause leaks.

If you’ve hit a serious pothole, listen to what your vehicle is telling you. Is it making a new noise? Is it vibrating when it didn’t before? Is it pulling to one side or driving differently in some way? Are there new leaks? If so, it’s safe to assume you’ve sustained damage that needs to be remedied ASAP, even if you haven’t had a major blowout, as many pothole-created problems can start small and become much larger quickly.

After any hard impact, it’s probably a good idea to get a quick realignment and assessment from a professional.

Check out all the steering and suspension parts available on NAPA Online, or trust one of our 17,000 NAPA AutoCare locations for routine maintenance and repairs. For more information on what to check if you hit a pothole, chat with a knowledgeable expert at your local NAPA AUTO PARTS store.