Curious about the history of windshield wipers? Was there ever a time when this most basic — and seemingly necessary — aspect of automotive safety equipment wasn’t a common feature on every vehicle?

It might surprise you that not only is the answer to that question “yes,” but there have been a number of improvements and innovations that have guided the evolution of the humble wiper to its modern form. Let’s take a quick look at the path that’s been taken, and the reasons behind current wiper design.

It Began on a Trolley

Before cars, there were other vehicles that needed to see ahead of them, too. In fact, the history of windshield wipers begins on the trolley tracks, not the highway, after a woman named Mary Anderson found herself shocked by how difficult it was for a New York City streetcar driver to keep the glass in front of him clear on a stormy day.

Anderson had trouble finding a taker for her concept, and despite patenting the manually operated technology in 1903, she would never benefit financially from her idea before its trade protection expired. Several other early visionaries in Europe (and an American named Robert A. Douglass, focused on trains), would also see their efforts ignored by the industry at large.

Ten years later, however, wipers had become increasingly common on the newfangled automobiles that were starting to crowd roads and city streets. Some early electric designs actually used rollers that passed over the glass to do the cleaning, but it would ultimately be the spring-tension rubber blades developed by Tri-Continental Corporation in 1917 and the vacuum-powered automated wiper mechanism to power them that would dominate the next several decades of passenger car production.

The history of windshield wipers would see a bit of drama when intermittent timing appeared on the scene, invented by Robert Kearns, who would later battle Ford whom he believed stole his idea without giving him credit after he had presented it to them in 1963. 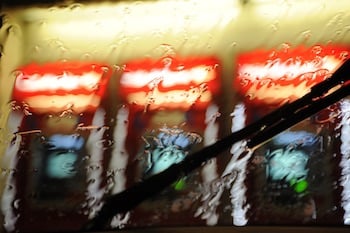 The move away from vacuum power also began in this decade. A disadvantage of using a vacuum to move wipers was that it wasn’t strong enough at higher engine speeds to counteract the force of the wind moving against the blades themselves, often making it dangerous to drive in the rain. Electric motors provided an easy solution to this particular problem.

Automatic for the People


Today, wipers have advanced to the point where they can use a sensor to detect the amount of rain on a windshield, in place of a more traditional intermittent system, as well as hide themselves under the hood cowl for better aerodynamics when not in use. The rubber in the blades themselves has also improved, incorporating materials such as Teflon and silicone to better resist damage, move more freely and prevent freezing. Still, the basic concept — a clean sweep across the glass in a carefully controlled arc — continues to be the backbone of most wiper designs.

If you ever wondered how modern windshield wipers came to be, this walk down memory lane takes a look at the necessary components. For simply pushing water off of your windshield, wipers are complex components that have come a long way.

Check out all the vision and safety parts available on NAPA Online or trust one of our 17,000 NAPA AutoCare locations for routine maintenance and repairs. For more information on the history of windshield wipers, chat with a knowledgeable expert at your local NAPA AUTO PARTS store.

NAPA Know How Blog A Quick History of Windshield Wipers