Alexander Rossi wrote his name in the history books, winning the 100th Running of the Indianapolis 500 and taking his first Verzion IndyCar Series win in spectacular style. Starting from the 11th position on the grid, the American won the iconic race in front of a sold-out audience, driving the No. 98 NAPA AUTO PARTS / Curb Honda for the Andretti Autosport team, and becoming the first rookie to win the prestigious race in 15 years.

The 200-lap race marked a new chapter for Alexander’s open-wheel story, finding victory at the iconic Indianapolis Motor Speedway with his sixth career Verizon IndyCar Series start. Alexander becomes the 70th winner in race history and will become the 103rd face on the famed Borg-Warner Trophy. 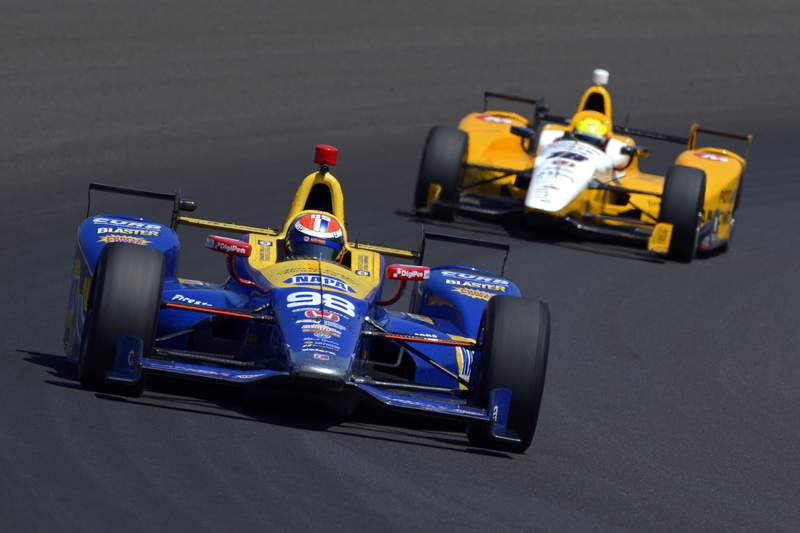 Throughout the build-up to the race, Alexander and Andretti Autosport had looked on strong form, with the Californian native topping the time sheets in the practice sessions and consistently putting the No. 98 at the sharp end of the grid. Narrowly missing out on the ‘Fast Nine’ in qualifying last weekend, Alexander always knew both he and the car had the potential to be at the forefront of the field of contenders, with anticipation building for Sunday’s race day.

Alexander lined up on the third row in P11, and following the green flag quickly settled into a steady race, lapping The Brickyard with strong times. His race came alive when he remained on track during a full course yellow to clear Mikhail Aleshin’s Schmidt car. Though it placed him out-of-sync with the lead pack as they pitted in green flag conditions, Alexander was brought back into contention with 50 laps remaining due to a brilliant stop by the Andretti Autosport team under more yellow flags, meaning he joined the track while others pitted. All the race leaders stopped for fuel and tires on Lap 164, and one by one, they were forced to make late stops for splashes of fuel. 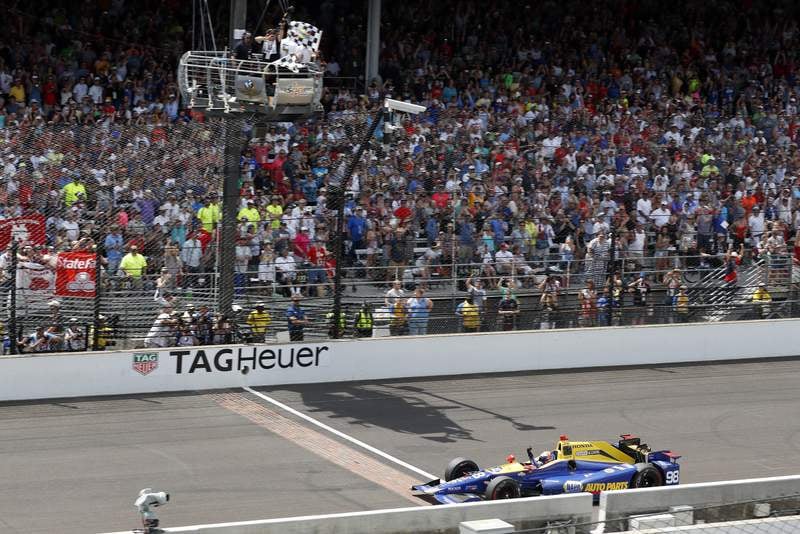 In the No. 98 NAPA Auto Parts/Curb Honda, Alexander took the lead on the 197th of 200 laps on the 2.5-mile Indianapolis Motor Speedway oval when teammate Munoz stopped for fuel and it was a race of precision driving to the finish. Running dangerously close to empty after stretching his 18.5 gallons of ethanol for 36 laps, Alexander all but coasted the final lap with the team cheering him on through the radio. The Californian slowed his pace dramatically for his final four laps; his last lap averaged 179.784 mph, nearly 40 mph slowed than Munoz’s final circuit, however he still had enough momentum to take the checkered flag across the famous yard of bricks by the largest margin of victory since the 1996 race. 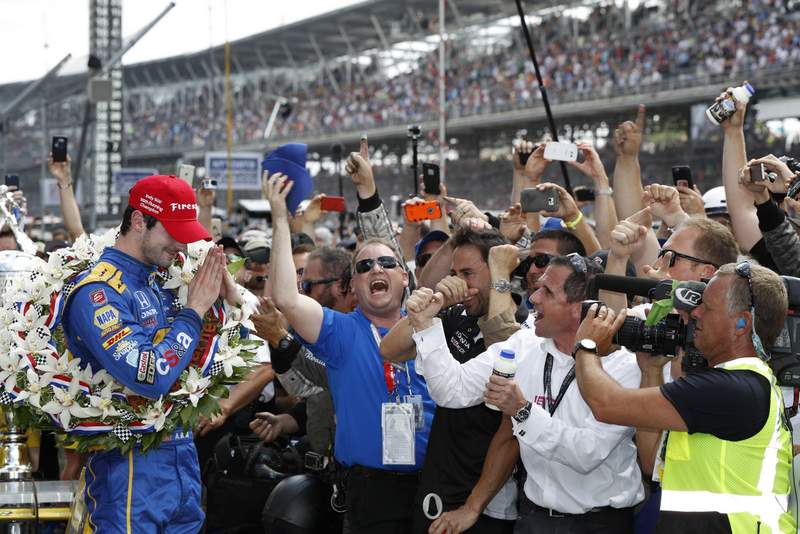 Indeed, it was precision calculation and expert driving at its finest and Alexander crossed the finish line 4.4975 seconds ahead of teammate Carlos to win the historic running of “The Greatest Spectacle in Racing.” It was the first Verizon IndyCar Series victory for the rookie in his sixth race and he is the first rookie to win the Indianapolis 500 since Helio Castroneves in 2001, 15 years ago.

In front of the first sellout in Indy 500 history, Alexander wowed the 350,000 fans in attendance. Alexander credited strategy and calls made by Bryan Herta and the team for the phenomenal result; “I have to thank Michael Andretti and Bryan Herta for giving me such a wonderful race car all month. We ran out (of fuel) in Turn 4 and we were clutching it and coasting it down the back straight. We knew it was going to be tight but Ryan (Hunter-Reay) helped give me a tow to the finish the last couple laps there and it was an amazing result.” 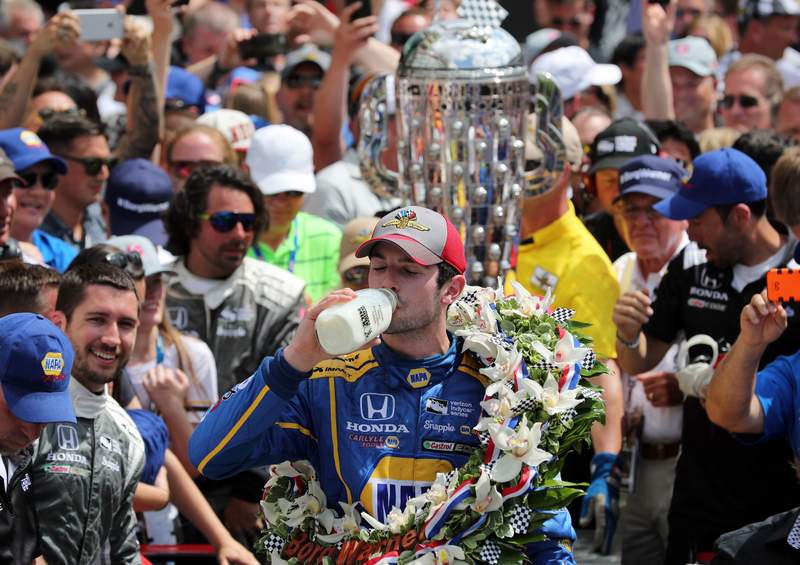 Alexander now stands in P6 in the IndyCar Series Championship on a tally of 203 points, just two points behind James Hinchcliffe, and will head to Detroit next weekend for the seventh round of action in the 2016 season.

Alexander Rossi: “There are few words to truly describe how I’m feeling right now. I really was focused on taking it one lap at a time – the emotional roller coaster of this race is ridiculous. There were moments I was really stoked, really heartbroken, really stoked. We rolled the dice and came through and made it happen. This is unbelievable and I have no doubt it’s going to change my life. But we did it, and I have to say a huge heartfelt thank you to everyone who has supported me – my incredible family, Bryan, Michael and my amazing team, my phenomenal partners who have put so much belief in me, and every single person who has supported me to this point. Thank you.” 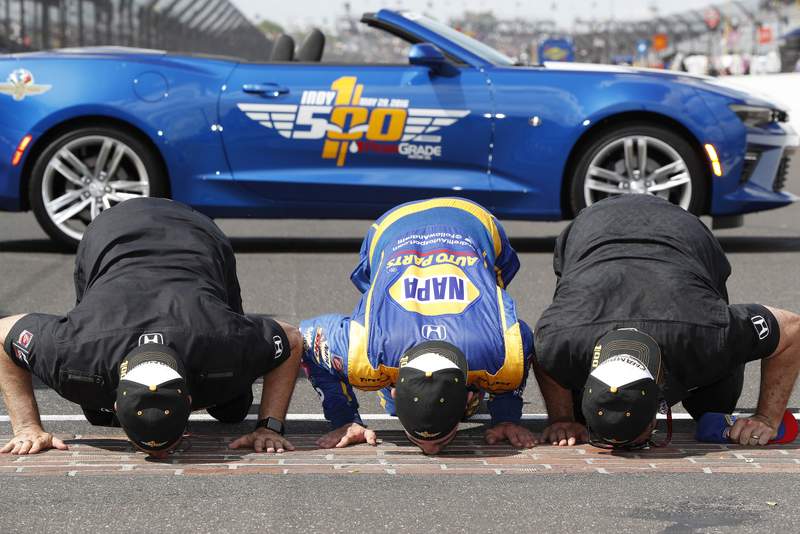