Fuel cell vehicles fall under the general alternative-energy umbrella, representing any type of automobile that doesn’t run on gasoline. Diesel and electric vehicles (EVs) make up this category, with the latter in its own subset. 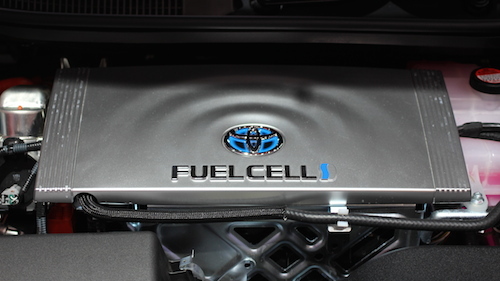 FCVs run on hydrogen gas stored in a compressed state within high-pressure tanks. Car manufacturers place these tanks in or underneath the trunk. The fuel is dispensed from service-station pumps just like for gasoline- and diesel-powered cars. However, these pumps are exclusively found at hydrogen service stations. Another option is home fueling stations.

From the tanks, hydrogen flows to a fuel cell stack that contains a collection of cells. Individual cells consist of a pair of electrodes (an anode and a cathode), an electrolyte and catalysts. As hydrogen flows into the fuel cell, it enters each penetrable anode. The anodes then separate the hydrogen atoms into positively charged protons and negatively charged electrons.

Electric energy is provided courtesy of the protons. The electricity generated by the fuel cell stack is sent to the electric motor that distributes power to the wheels, driving the vehicle.

The hydrogen-storage tank, fuel cell stack and electric motor are three of the five most important components of hydrogen fuel cell cars.

Also included in this list is the high-output battery for storing energy that is produced by regenerative braking, which harnesses kinetic energy from the braking system to reuse. The battery pack also harnesses excess energy from the fuel cell. The fifth major component is the power control unit, tasked with governing the flow of electricity.

We already touched on one significant advantage of FCVs: clean emissions. Unlike a standard EV, hydrogen fuel cell cars still have a tailpipe. Also unlike traditional electric vehicles and hybrids, they don’t release any noxious fumes into the atmosphere. Another advantage is the driving range. Fuel cell vehicles can go at least 250 miles before filling up, which is much longer than a conventional EV, such as the Nissan Leaf. Lastly, if you like a quiet car, a hydrogen fuel cell vehicle is as silent as a standard electric car like the Tesla Model X.

The prime disadvantages include the lack of models and fuel availability. Currently, there are only three models on the market: the Honda Clarity, the Hyundai Tucson Fuel Cell and the Toyota Mirai. All three are only available in California, as the Golden State has the only refueling infrastructure in the United States — and it’s still under development.

If you’re looking into going green, FCVs are a zero-emissions choice. However, unless you live in California, it’s important to carefully consider whether you’re ready to take on the responsibility of setting up a fueling station at home.

Check out all the fuel & emission system parts available on NAPA Online or trust one of our 17,000 NAPA AutoCare locations for routine maintenance and repairs. For more information on hydrogen fuel cell cars, chat with a knowledgeable expert at your local NAPA AUTO PARTS store.