So you’ve decided you want to get into ATVing. You’ve picked out the style of ATV you want, scoped out where you want to ride and even got a few buddies to join you on the trails.

But the question most people ask when buying their first ATV is: What type of ATV fuel should I run? This doesn’t mean brand of fuel, but rather what style engine your ATV will be powered by. Here’s a look at the different fuel-burning power sources to help make your choice a little easier.

There are primarily two types of engines for ATV’s: 2-stroke and 4-stroke. Both run on unleaded gasoline similar to the one in your weed whacker, but 2-strokes require the gas to be mixed with 2-stroke specific oil. 2-stroke engines do not have an oil reservoir to lubricate moving parts so they require oil to be added to the burning gas to coat the internal parts during combustion. 4-stroke engines have a lubricating oil pan, typically located at the bottom of the engine, enabling them to run on straight gasoline. 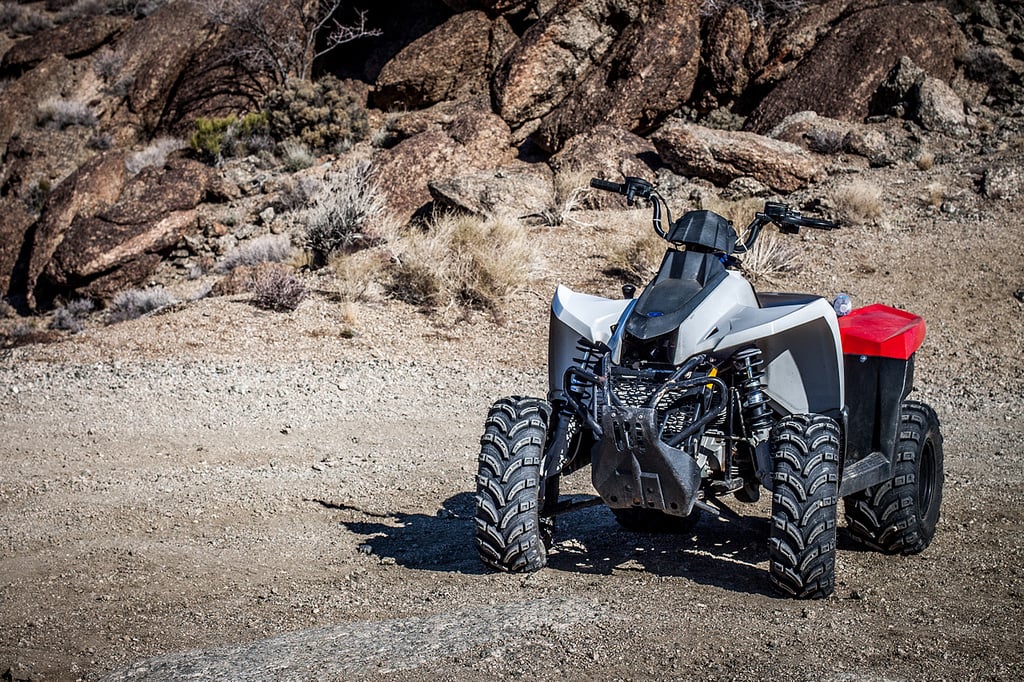 In 2-strokes, oil is mixed in the gasoline at a specific ratio to protect the parts inside the engine. Pouring this oil into the gas can and mixing ahead of time will ensure an even mixture and save time when you refuel. Also, because the oil is mixed into the fuel, 2-strokes tend to emit more smoke than a 4-stroke engine, which is easier since you don’t need to mix the fuel.

By nature of their varying combustion cycles, 2-stroke and 4-stroke engines run differently. 2-strokes rev quicker and thus accelerate faster as it takes fewer rotations of the crank to complete a cycle. They’re also more adept to being run on different angles and even upside down, whereas 4-strokes run the best upright. This way the oil can be picked up and dispersed throughout the motor. On the flip side, 4-stroke engines accelerate slower but have a higher top speed and can generate more power for things like towing or carrying more weight.

As mentioned above, 4-stroke engines are more popular because they’re easier to use. Fuel is straightforward; you put gasoline in the tank and oil in the engine and you’re all set. For beginners and those using their ATV for recreational purposes, 4-strokes are more user-friendly. If you’re interested in racing or want to have the quickest quad on the trail, then you may want to consider a 2-stroke.

Yes, believe it or not, there are diesel ATVs and UTVs. While they’re typically more for the UTV crowd, diesel engines produce more torque and thus more power for towing and hauling. By nature of their design, they typically get higher fuel mileage, which makes them great for camping and riding on longer trails. You’ll be hard pressed to find an ATV that’s diesel powered, but it’s something to consider if you’re not really looking into UTVs and want to take your adventure further or use it for camping.

Picking the right engine style for your first ATV can be a little tricky. To make the best choice, think about where you’ll ride, how far you’ll go between fuel stops and what you’re looking for out of your ATV.

Check out all the motorcycle and powersport parts available on NAPA Online or trust one of our 17,000 NAPA AutoCare locations for routine maintenance and repairs. For more information on ATV fuel, chat with a knowledgeable expert at your local NAPA AUTO PARTS store.