Your car AC system might seem fairly complex, especially if you’ve ever received a bill to repair it. Breaking it down into its major components can help demystify how it works. Almost every car features the same basic air conditioning parts that work together to keep things cool when the weather turns hot. It’s not quite the same as the air conditioner you might have at home, but it’s not all that different, either. Here’s an overview of your vehicle’s air conditioning system.

The lifeblood of an air conditioning system is the refrigerant. Over the years there have been several different refrigerant types used in automobiles. Most people use the term “Freon” to describe all refrigerants, but in actuality it is a brand name mostly associated with R12 refrigerant. R12 refrigerant was used for decades until it was banned in 1996. The chemical makeup of R12 makes it very bad for the environment so it was phased out. Next came R134a which was found to be more environmentally friendly while still working similarly to R12. In fact some R12 air conditioning systems can be converted to R134a with the right steps. But R134a was eventually shown to also damage the environment, so something new had to be found. The current improved refrigerant is 1234yf and has already been put into use my almost every automaker. It is important to note that you cannot mix any of these refrigerants.

Each air conditioning system is also designed to hold a precise amount of refrigerant. Having too much or too little refrigerant leads to the system not performing at peak cooling ability.

A car air conditioning system works by taking advantage of the laws of physics concerning how heat is absorbed and emitted. Long story short: Compressing a gas heats it up, and then allowing it to decompress again and condense into a liquid causes it to lose its heat rapidly. Quickly moving from that liquid state back to a gaseous one absorbs ambient heat and then the process can start all over again.

The compressor is the part of your car’s air conditioning system that takes care of the first part of that equation to squeeze gaseous refrigerant. The compressor is usually driven by the accessory belt of the engine, but in the case of an electric vehicle an electric motor is used. Early air conditioner compressors actually looked like little air compressors including a familiar piston and crankshaft arrangement. Today most manufacturers use an axial style compressor which is both compact and efficient. An axial compressor uses multiple pistons and a swash plate to move them up and down to compress the refrigerant. 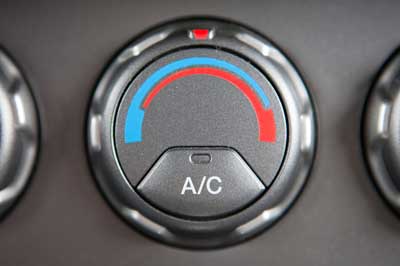 Once the refrigerant has been pressurized, it’s time to send it to the condenser, where it cools down inside a series of finned tubes. As it cools, it condenses back into a liquid state, although it’s still under pressure. Before hitting the next stage in its journey, this liquid is passed through a receiver/dryer mechanism that removes any water that might have somehow contaminated the refrigerant, which eliminates the risk of ice crystals forming inside a car air conditioning system. You’ve probably seen your condenser but thought you were looking at your radiator. The condenser is  usually located in front of the radiator where it can get the most ambient air passing through it. The receiver/dryer typically looks like a cylinder (think small fire extinguisher size) and is filled with desiccant to capture moisture. Whenever a compressor is replaced it is common to require replacing the receiver/dryer as well as part of the warranty, as the old receiver/dryer may have debris inside it that can damage the new compressor.

This exposure causes the fluid to actually boil — because the boiling point is very low in liquid form — and the end result is its transformation into a gas once more. In the process of becoming a gas it absorbs a lot of heat from the surrounding air, which chills the evaporator coil enough so that a fan blowing over it can redistribute that cold air through the vents in your car. Any condensation that collects on the outside of the evaporator is drained through the bottom of the air box and out the bottom of the vehicle.

Though your car AC system may seem complex at first, breaking it down can make an overwhelming concept much easier to understand. Even if you have a van or SUV with a separate rear AC system, the overall system still works the same but with an additional evaporator and fan.

Check out all the air conditioning system parts available on NAPA Online or trust one of our 17,000 NAPA AutoCare locations for routine maintenance and repairs. For more information on your car AC system, chat with a knowledgeable expert at your local NAPA AUTO PARTS store.

NAPA Know How Blog Beat The Heat: Understanding Your Car AC System And Its Parts