In one of the most dramatic point battles in World of Outlaws Sprint Car Series history, Brad Sweet and ten-time series champion Donnie Schatz have swapped the top spot of the championship standings multiple times throughout the course of the season. It happened again on Friday and Saturday night in a huge point swing as Sweet captured the checkered flag at Lernerville Speedway on Saturday, while Schatz fell on some bad luck. 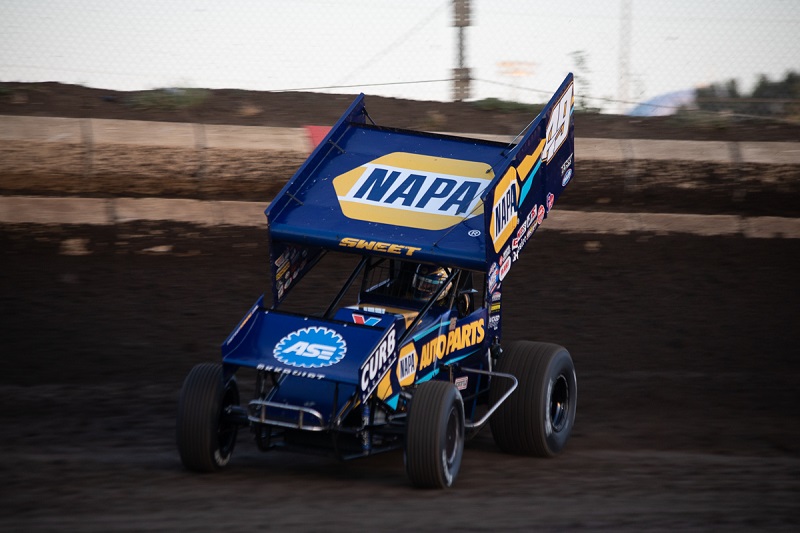 The racing action began on Wednesday at Jacksonville Speedway in Jacksonville, Ill. Fast off the truck, the No. 49 NAPA AUTO PARTS machine earned the fifth-fastest speed in qualifying. After a second-place finish in his dash, Sweet started eighth in the DIRTVision Fast Pass Dash, which sets the front four rows of the feature, based on drivers finishing position in the eight-lap sprint. With only a few laps and starting deep in the field, Sweet advanced to seventh in the dash, which put the Kasey Kahne Racing team on the inside of the fourth row for the 40-lap feature.

Sweet slowly marched toward the front at the drop of the green flag. With tricky track conditions it was a difficult race for all 24 drivers that made the feature. By the halfway point in the race, Sweet had moved into the top five as leaders navigated heavy lapped traffic and multiple cautions. Front-runners Sheldon Haudenschild and Shane Stewart both had issues in turn four, and Sweet advanced another position in a late race restart to cross the finish line in second place, picking up a few points on championship leader Donny Schatz. 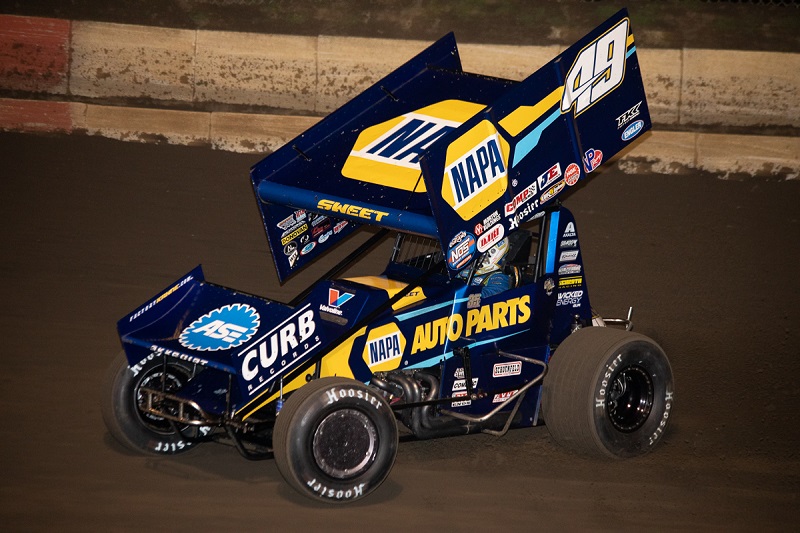 On Friday, the series moved to the famed Eldora Speedway, where earlier this season Sweet won his second-career Kings Royal and the richest prize in all of sprint car racing: a cool $175,000. With 44 cars in attendance, qualifying was split into two groups.

After a two-and-a-half-hour rain delay before qualifying, Sweet was the ninth-fastest in “Flight A,” placing him in the fifth starting position in his heat; there, he went on to finish in fifth. Missing a spot in the dash, Sweet and the No. 49 team would start deep in the field at 17th for the feature. 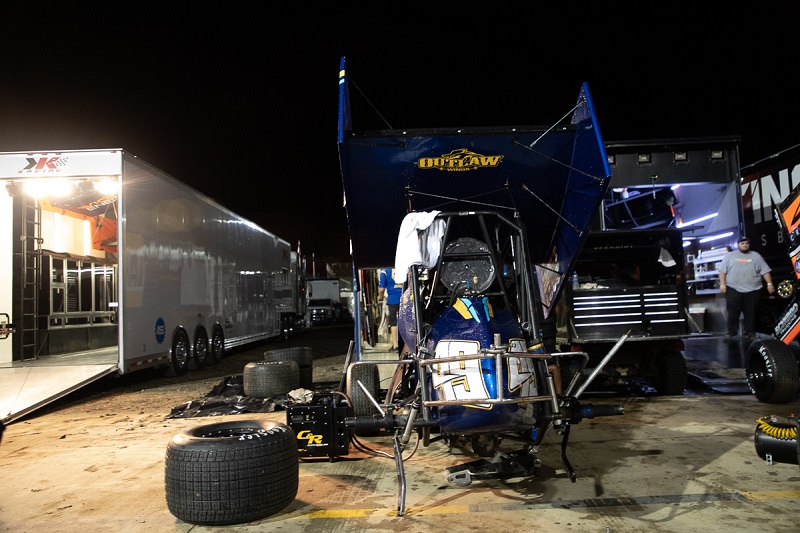 Crew chief Eric Prutzman, along with NAPA team members Andrew Bowman and Joe Mooney, went to work on the Kasey Kahne Racing car, knowing every position in the feature is key towards the championship.

Track conditions were ultra-fast at the start of the green, and within the first two laps, two cars got upside down in separate incidents. The remainder of the race went caution-free, and due to the hard work the NAPA team put into the car before the feature, Sweet was able to work all the way up to sixth at the checkered flag. The NAPA driver earned the KSE Hard Charger award for advancing the most positions in the race. Sweet also narrowly regained the points lead with his 57th top-ten finish of the season. 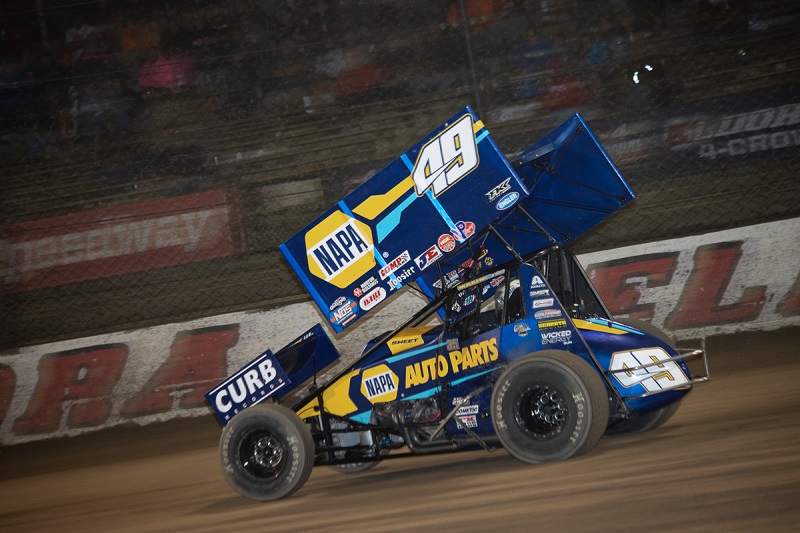 On Saturday, the NOS Energy Drink Sprint Car Series continued its trek east to Lernerville Speedway in Lernerville, Pa., where Sweet is the defending winner of “The Commonwealth Clash.”

Second-fastest in qualifying, second place in his heat, and a win in the dash brought Sweet to the pole position for the 35-lap feature. 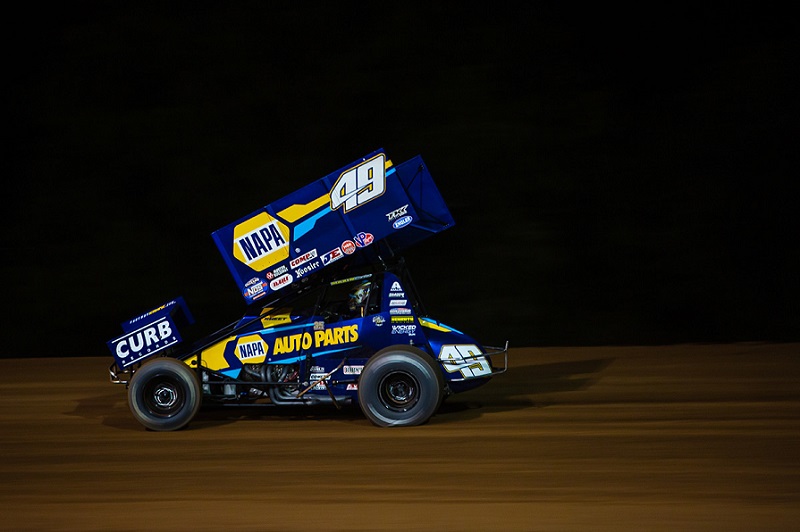 With championship rival Donny Schatz starting outside of Sweet at the drop of the green flag, the NAPA AUTO PARTS team jumped out to an early lead over the No. 15 Tony Stewart Racing car. The first caution fell after just lap one of the race, bunching up the field for a restart. Again, Sweet shot to the lead on the ensuing restart, but Schatz gave chase and was on Sweet’s bumper as the pair exited turn two. Another quick caution fell again a lap later, giving Schatz another shot at the No. 49.

Having the advantage of being the leader, Sweet beat Schatz to the line for the third straight restart. Giving chase down the backstretch, Schatz made a charge for the lead on the low side, but with momentum in the top groove, Sweet held off the No. 15 and the two began to pull away from the field.

With just ten laps down, the two leaders began to catch lapped traffic. Schatz stayed within a few car lengths of Sweets bumper, but Sweet was able to keep the defending series champion at bay.

As the laps clicked off and with only 16 to go, Schatz suddenly slowed on the front stretch, bringing out another caution. In an ultimate show of sportsmanship, Kasey Kahne Racing crew members, along with other teams, lent a hand to the Tony Stewart Racing team to diagnose and repair the problem with Schatz’s car. However, time ran out on the two-minute repair clock, and Schatz’s night was done.

With work on the track still to be done, Sweet now faced pressure from Shane Stewart and David Gravel. Holding off Stewart on the restart, Sweet stretched his lead to an impressive 2.5 seconds and won his 16th feature of 2019, and 50th of his career. 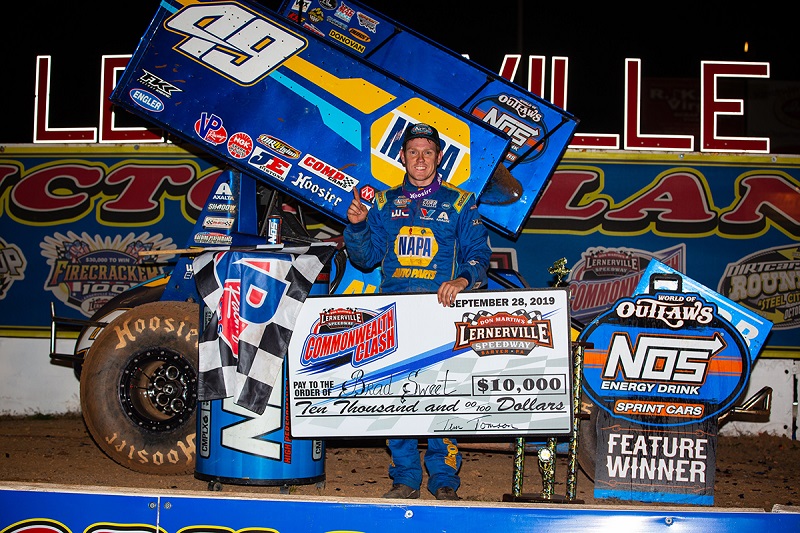 “We’ve been on a little roller coaster ride where we’ve been up or down a little bit,” Sweet said in victory lane. “But I thought we really dug deep at Dodge City and Eldora. Last night (at Eldora) was a big night for us. Sometimes those fifths and sixths when you come from the back are good rebounds. In the big scheme of things that’s always good. We just want to get wins. If we show up every night and keep winning these races, it’s our championship to lose.”

Nine events remain in the 2019 season with Sweet now holding a 40-point lead over Schatz. The series returns to action October 4 and 5 at Williams Grove Speedway for the Champion Racing Oil National Open.