The CAN bus system isn’t something you hear car fans talking about on a daily basis, but it’s one of the most important parts of any modern vehicle. Simply put, this electronic switchboard is what keeps all of your vehicle’s systems communicating with each other so that your car or truck stays running in tip-top shape.

How does this piece of automotive magic work? Read on for the CAN bus basics.

CAN bus isn’t just found in the world of automobiles — it’s actually a standard (Controller Area Network) bus that can be found in a variety of applications. “Bus” is a term that refers to any communications system that can move data between one component and another. CAN bus first hit the scene in the ’80s, but it wasn’t until the early ’90s that vehicles started to feature enough controllers, sensors and microprocessors to require a dedicated bus to handle all the data traffic. Moving to CAN bus also allowed car companies to cut out a significant amount of wiring from each automobile, as the system simplified the electronic control techniques that had been used up to that point. 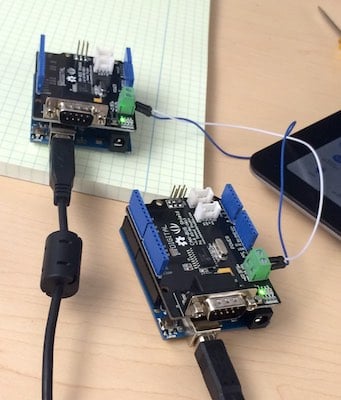 The CAN bus system consists of a primary controller that keeps watch over all vehicle systems from a central location. This makes it easier to monitor for faults, and then diagnose specific problems, rather than having to manually query numerous sub-controllers distributed throughout a car or truck. It also reduces the points of failure: With a single data line handling all communications, there’s no need to worry about multiple connections potentially breaking down and causing problems. The design additionally allows for the main system to continue to work even if a subsystem fails, which is a level of redundancy that was harder to achieve when discrete controllers were in use.

The implementation of CAN bus allowed car companies to move forward with On-Board Diagnostics protocols, known as OBD-I and the current OBD-II standard. OBD-II offers a set of standardized problem codes that can be easily interpreted by mechanics and even owners when trying to diagnose a problem. The data port through which OBD-II codes are accessed also serves as the point of entry for software updates to a vehicle’s on-board systems and computers — something that would have been impossible, and which would require actually physically replacing computer chips, prior to the existence of the CAN bus system.

Check out all the electrical & ignition system products available on NAPA Online or trust one of our 17,000 NAPA AutoCare locations for routine maintenance and repairs. For more information on the CAN bus system and your car, chat with a knowledgeable expert at your local NAPA AUTO PARTS store.

NAPA Know How Blog CAN Bus System: Understanding the Basics