Behind the wheel of the red, white and blue NAPA Batteries Dodge Charger SRT Hellcat, Ron Capps earned his sixth consecutive top-seeded starting position after a strong qualifying performance at the NHRA New England Nationals in Epping, N.H. By powering to the first sub-four-second Funny Car E.T. of the weekend in round one of eliminations, Capps earned a bid to the quarterfinals but came up short against his teammate and eventual race winner Matt Hagan.

Capps earned the No. 3 starting position on Fourth of July weekend to lead DSR as the highest-qualified entry heading into race day at the NHRA New England Nationals. 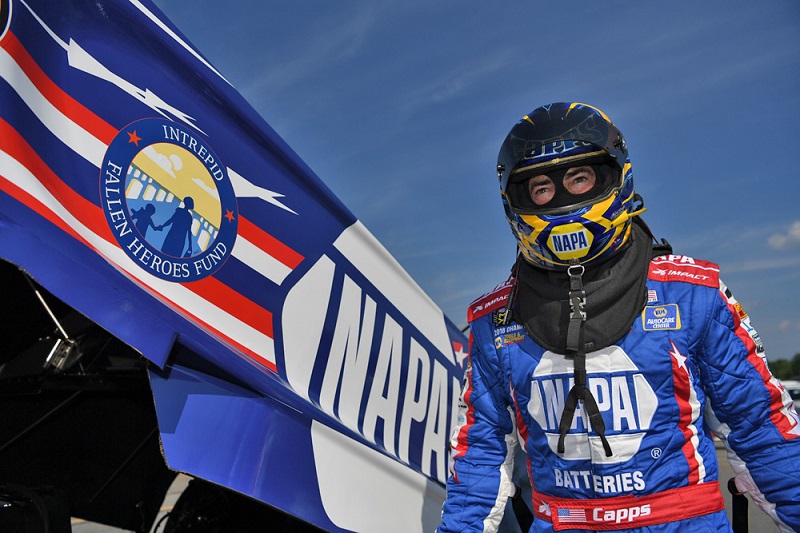 Capps and the Rahn Tobler-led NAPA Batteries team battled tough conditions throughout an abbreviated three-run qualifying schedule to earn five bonus points, and it was clear that Friday and Saturday’s high temperatures had them well-prepared for a warm race day. 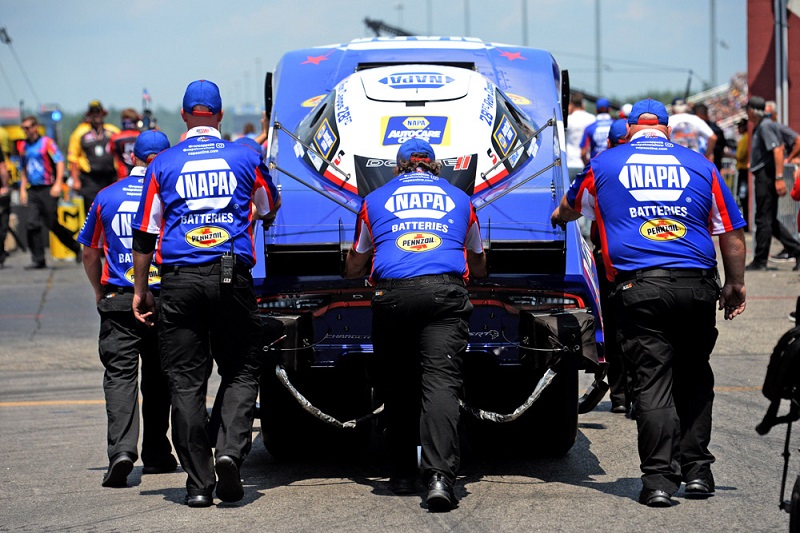 In round one, Capps rocketed the NAPA Batteries Dodge Charger SRT Hellcat down the track in 3.980 seconds, posting the first three-second Funny Car pass of the weekend to take the round win over opponent Mike Smith. 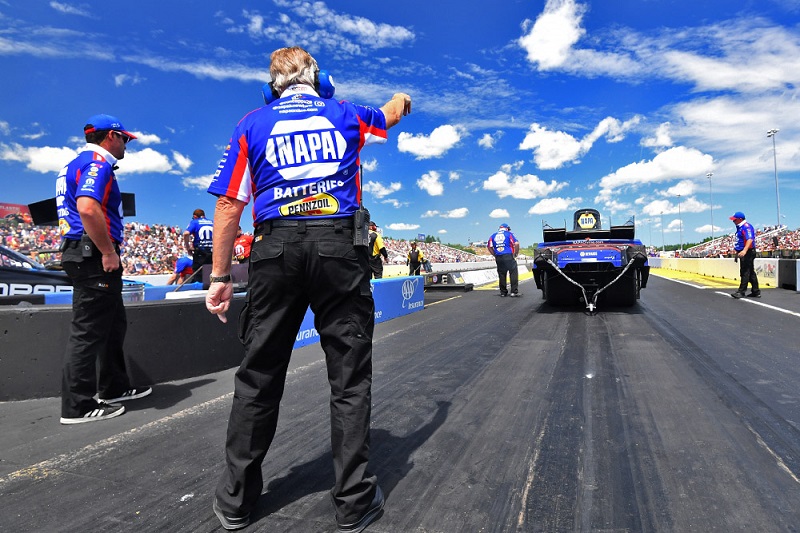 The quarterfinals pitted Capps against fellow Hellcat pilot Matt Hagan, the only other driver to make a sub-four second Funny Car pass in round one. The owners of the two best E.T.s of race day lined up prepared to battle for their spot in the semifinals. Capps and Hagan were nearly even early into the run, but Capps’ machine started to drift toward the centerline, and he was forced to click it off and give up on the run. 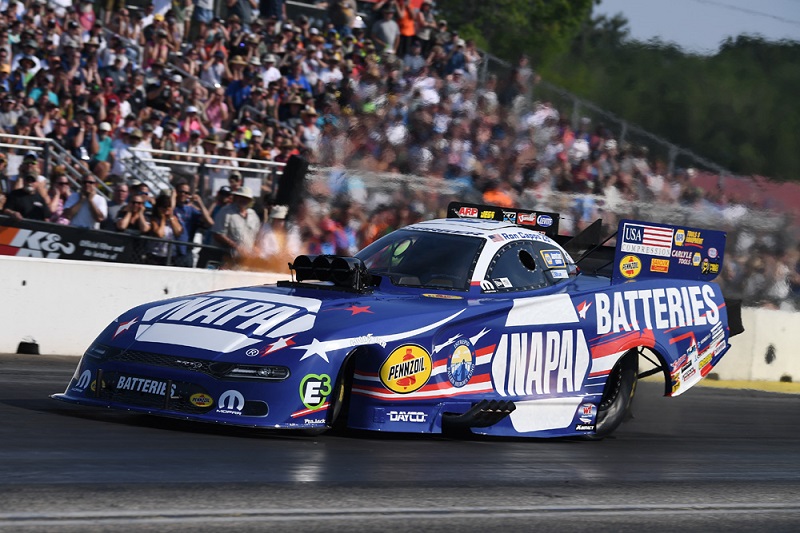 “Don’t mean to sound cliché, but we are having a lot of these weekends,” said Capps, a two-time New England Dragway event champion. “We have a great race car. We’re great through qualifying, and we put a target on our backs. Any time we go up there, we have to be at our very best because we put that pressure on other teams and it’s great. That’s why I brag about Rahn Tobler and the NAPA Know How guys because we consistently go down the track. If you look at qualifying here in New England, to make all three qualifying runs between a 4.03 and 4.05 and gain five bonus points, that’s the kind of consistency we are used to having. It just hurts a little more to go down on race day, because we really felt like we had a car that could go rounds.

“It was fun to represent NAPA Batteries and the Intrepid Fallen Heroes Fund with our red, white and blue car on Independence Day weekend. You could not ask for a better sponsor to let us go do fun stuff like this and raise money for a good cause. And that’s when you really want to park it in the winner’s circle, so it stings a little more that we didn’t this weekend.” 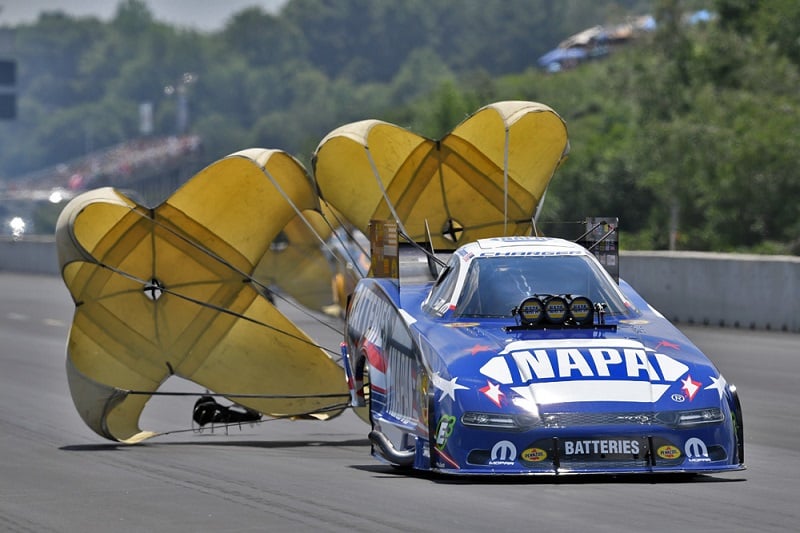 With five bonus points, a top-half qualifying performance and a round-one win, Capps advanced to the No. 4 spot in the Funny Car point standings. The NAPA AUTO PARTS Funny Car team will have a week off to refresh and regroup before embarking on the Western Swing where Capps raced to the final round at all three events in 2018. 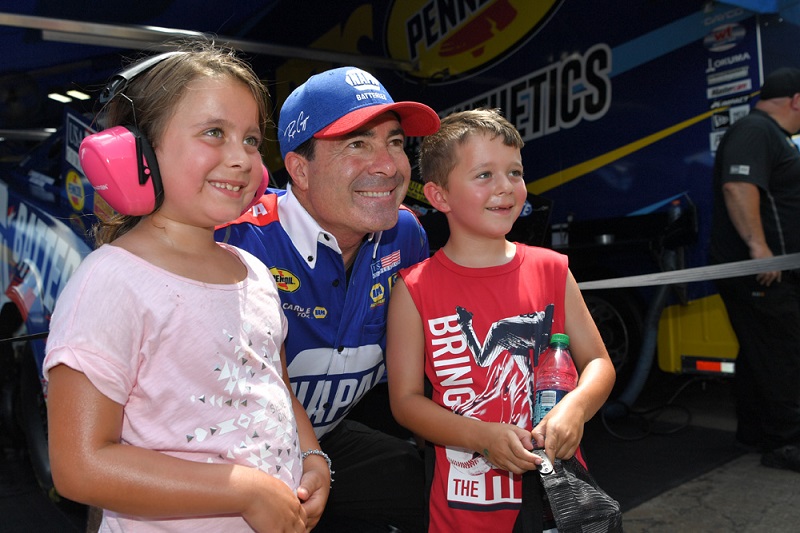 “We’ll take today’s outcome and go on to the Western Swing. I say it all the time, I don’t care where we qualify, I feel like we always have a car capable of winning. If we keep doing that, the wins will come, and we’ll be ready for The Countdown.”