From the pole to the winner’s circle, it was a banner weekend for defending series champion and new NHRA team owner Ron Capps during the NHRA Four-Wide Nationals at The Strip at Las Vegas Motor Speedway. Capps’ triumph was his 69th overall and goes down in the books as win No. 1 for the Ron Capps Motorsports team, which made its on-track debut less than two months prior. 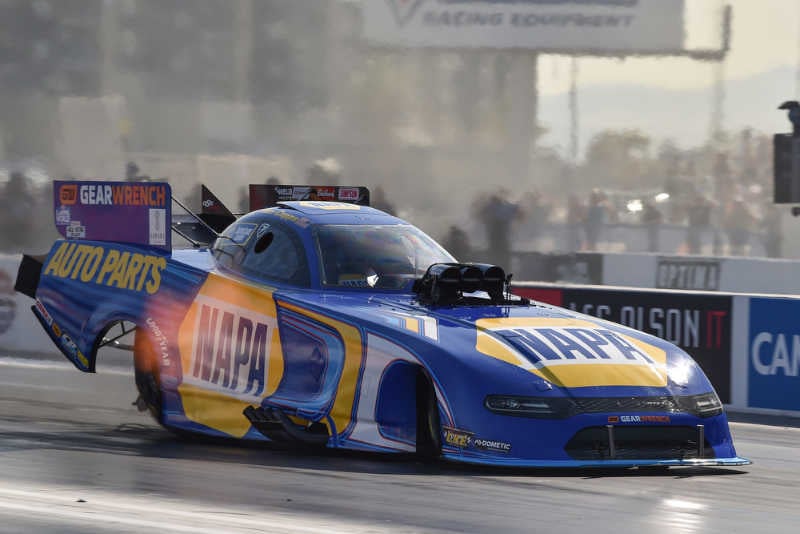 Capps’ weekend began by recording the third-quickest runs of Q1 and Q3 before closing out qualifying by running low E.T. of Q4 to earn his second No. 1 qualifier award in four races and 31st overall. 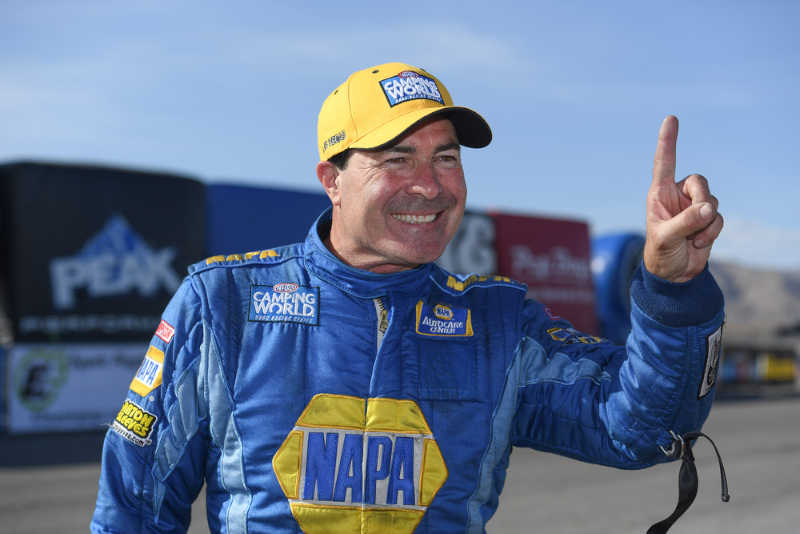 The driver of the NAPA AUTO PARTS Funny Car made his march to the winner’s circle look easy, powering to low E.T. of his quad in each of the three elimination rounds, knocking off several world champions along the way. After defeating Jason Rupert, J.R. Todd, and Tim Wilkerson in round one, Capps once again found himself lined up opposite Todd in E2, with Gainesville winner Matt Hagan and Bob Tasca staging their machines in the other two lanes. In lane one, Capps charged to the finish line in 3.902 seconds, eliminating Todd and Tasca in the process. The final quad pitted Capps against Hagan, Alexis DeJoria, and Robert Hight. For the sixth time in seven runs, NAPA crew chiefs Dean ‘Guido’ Antonelli and John Medlen tuned the NAPA Funny Car to a three-second pass with the Carlsbad, Calif., resident crossing the finish line beams in 3.914 seconds at 331.20 mph to pick up his sixth Las Vegas victory, and second four-wide triumph (first was from Charlotte 2017). 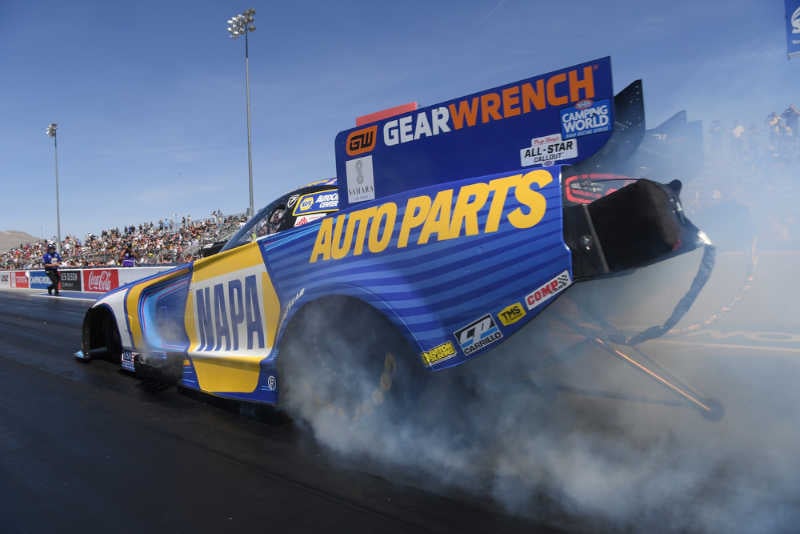 “Every quad was nuts,” said Capps, a two-time series champion. “To qualify No. 1 and still have to face Tim Wilkerson and J.R. Todd in the first round was crazy, and then to have (Matt) Hagan and J.R. and (Bob) Tasca in round two, and in the finals, it was Hagan, (Robert) Hight, and Alexis (DeJoria), I mean, it was like a murderers’ row out there. One of the best parts about racing with Guido is that he will not go up there to just run ‘okay’ or just to get down the track. He goes up there ready to throw down.” 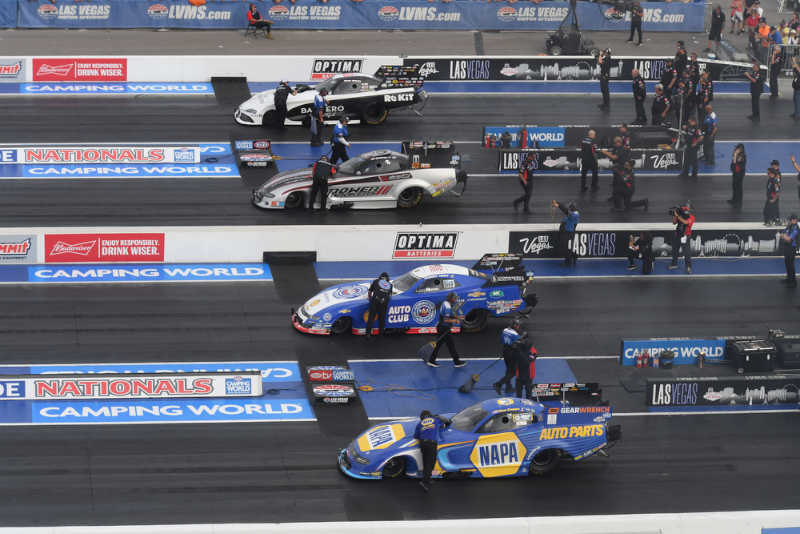 In the first four races, the Ron Capps Motorsports team has been successful in capturing two poles, a runner-up finish, a semifinal finish and now a trip to the winner’s circle. When asked if he was surprised by how quickly his new organization had found success, Capps was careful not to get ahead of himself but was quick to acknowledge he has a stacked arsenal that has already proven to be a formula for success. 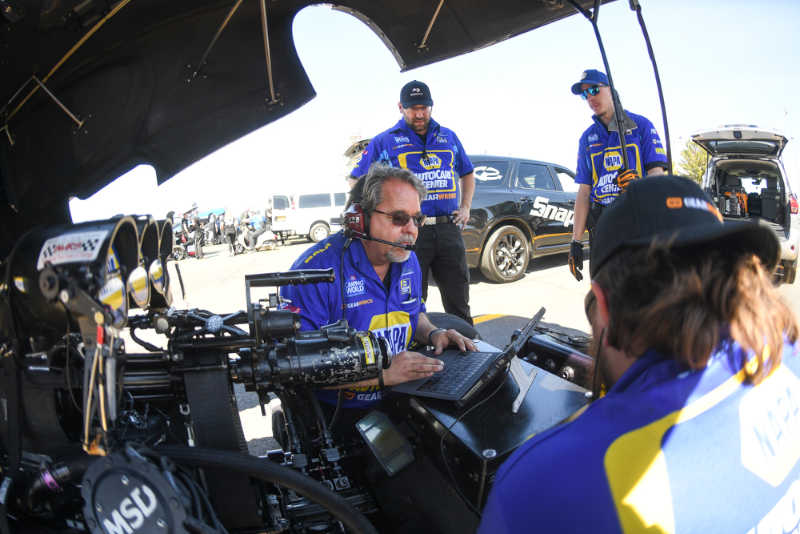 “We have the best parts, pieces, and that brain trust of great minds with Guido and Medlen,” said Capps. “Our whole NAPA AutoCare team, they don’t even bat an eye, they’re ready to go toe-to-toe with anyone out there. 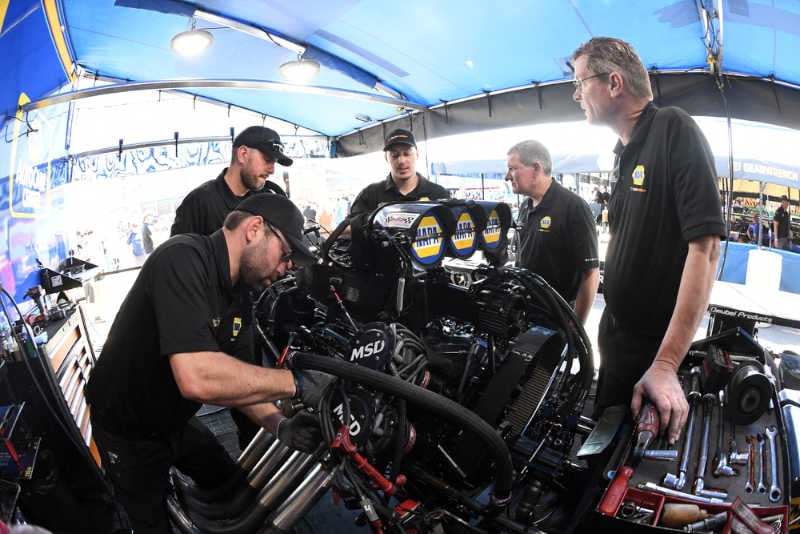 “Last year I thought we had the tightest field that I can remember seeing in my entire career, and it’s just as tough this year, so wins are tough to come by. We knew we had everything we needed, but you just don’t know when those wins will come. We started the year with a No. 1 qualifier in Pomona and went to the finals and I thought ‘man, this is just too good to be true,’ but I knew it would be tough and we’d really have to earn that first win. Guido has been so great and such an asset to this team, not just on the track but off the track as well, and of course, Medlen, he’s always coming up with these wild ideas and wanting to try all of these new things; it’s just been awesome and I’m so proud of what we’re building. It’s just really special. It felt like my first win today, I was speechless. Never in a million years did I think I’d own a Wally trophy, let alone to now be holding one of these as a team owner. I grew up in this sport. Every bit of my being has been in drag racing, so this moment is so surreal.” 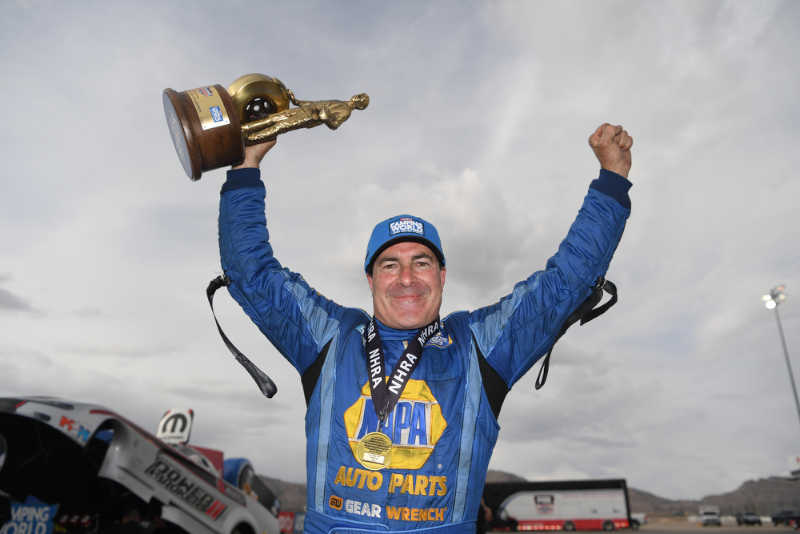