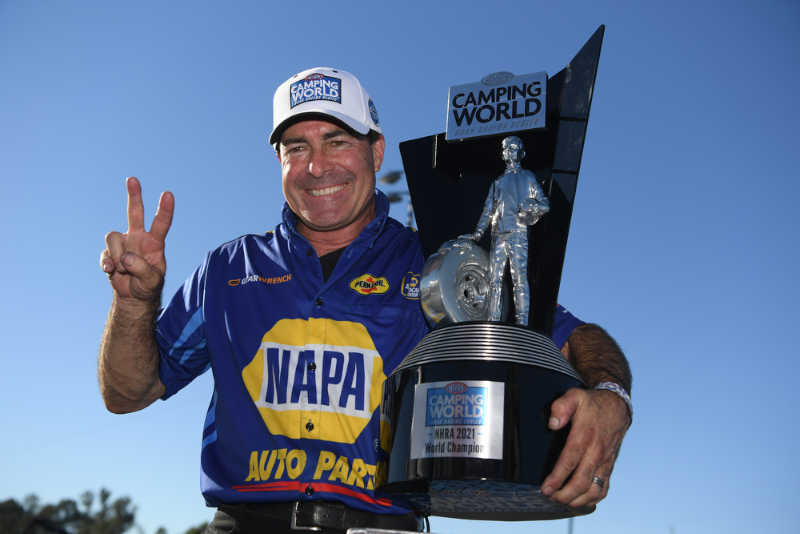 The 2021 Funny Car title chase came down to an intense intramural battle between Capps and his DSR stablemate, No. 2 ranked Matt Hagan, on the final day of the season. With 187 points up for grabs at the NHRA Finals, Capps began the race weekend with a 58-point advantage – or a two round lead – over his teammate. The NAPA AUTO PARTS Funny Car team was solid in qualifying with crew chiefs Dean ‘Guido’ Antonelli and John Medlen tuning Capps’ machine to the best run of Q2 and second-best run of Q1 to bank seven crucial bonus points. Their qualifying performance enabled them to further extend their lead on Hagan’s team to a 67-point margin, which equated to a three round advantage heading into race day. 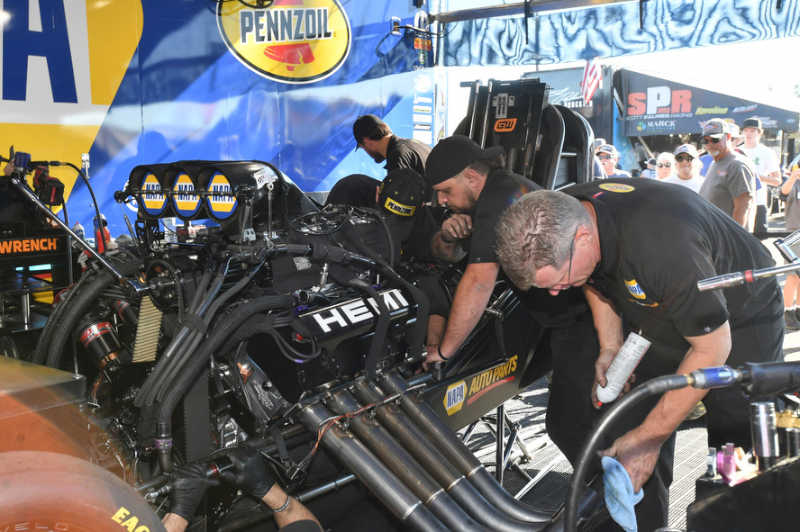 Once Capps and Hagan successfully defeated their round-one opponents, the stage was set for a thrilling round two showdown between the decorated drivers, with major championship implications on the line. If Capps were to have set off the E2 win lights, it would have immediately guaranteed him the 2021 title. He was first out of the gate against his teammate and held the lead until halftrack when Hagan was able to edge past for the narrow win, putting Capps in a stressful ‘wait and see’ situation where if Hagan were to go on and win the event, he would have been named champion. It was an hour-and-a-half full of angst for Capps in between rounds two and three, but he was able to breathe a tremendous sigh of relief when Alexis DeJoria defeated Hagan in the semifinals, resulting in Capps being awarded with the 2021 championship honors. 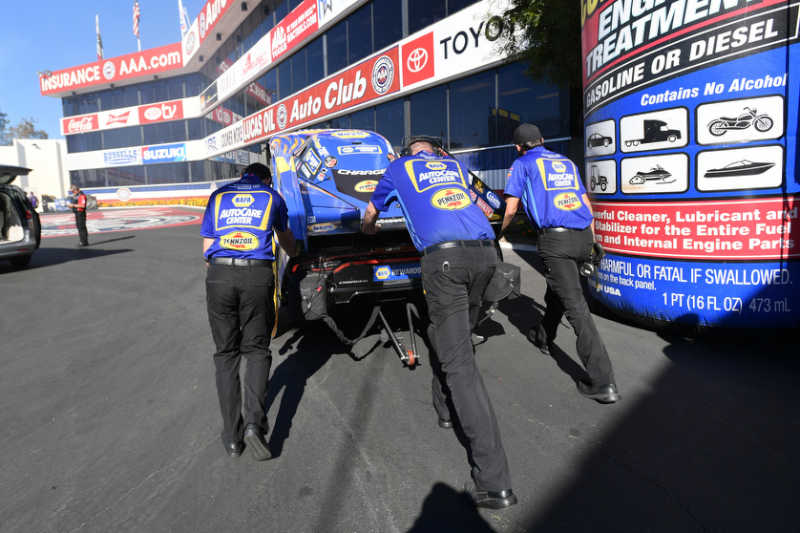 “I can’t even believe that just happened,” said an emotional Capps after watching the Hagan/DeJoria semifinal round from the starting line. “That entire Hagan team with (crew chief) Dickie Venables is incredible. I expected them to go win the race. I don’t know what to say. I’m just shaking right now. It was a close race between us in round two, but then I had to stand behind his car during the semis and wait to see how it played out. I remember being in the Pomona Raceway grandstand as a kid and watching guys like Joe Amato and Gary Ormsby line up in the final round years ago here, and to be doing this myself and to now have a second championship, I can’t say enough.” 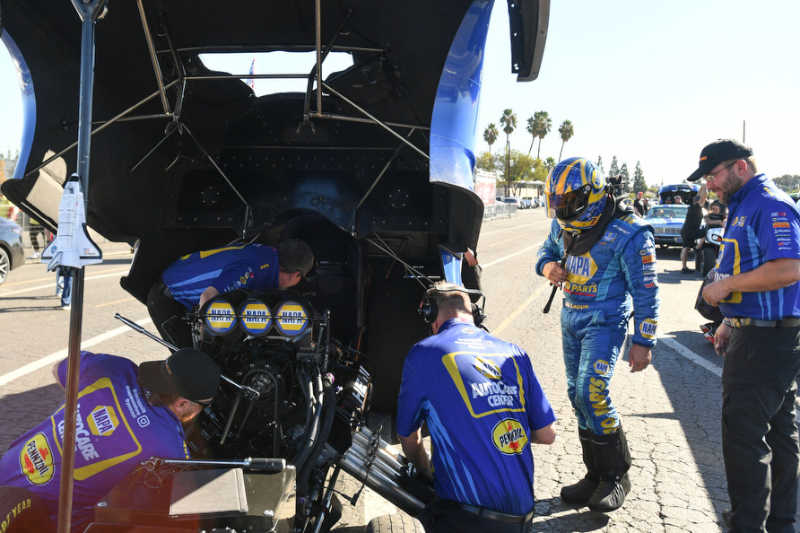 The series title is a first for the newly-formed Capps-Antonelli-Medlen trio, who were paired together in January 2020 when Capps’ former crew chief announced his retirement ahead of the 2021 season. Together, the new NAPA team was successful in securing two event wins, three runner-up finishes, and four No. 1 qualifiers in 2021. They advanced to the semifinals or beyond 11 times in 20 events, led the ultra-competitive category in number of round wins (36) and held the points lead five times throughout the year, including on three occasions during the seven-event Countdown to the Championship. 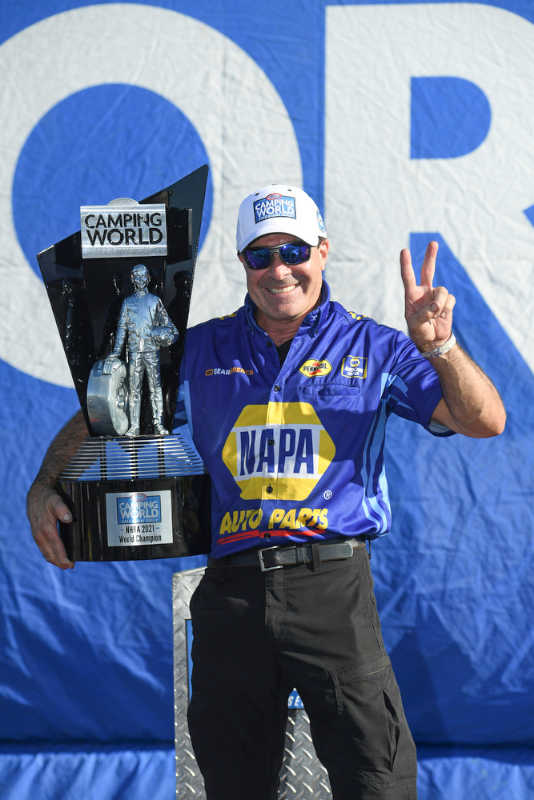 “This championship is for everyone at Don Schumacher Racing, and all of the people from my NAPA AutoCare team. From the front office staff and the hospitality crew who host our NAPA guests, and the fab shop guys who build our chassis, a huge thank you,” said Capps, the second-winningest Funny Car driver of all time with 68 national event triumphs, and now, a two-time world champion (2016, 2021.) “This championship is for NAPA AUTO PARTS and the NAPA AutoCare folks, everyone at GearWrench and Pennzoil and Dodge that support us. Thank you to our NHRA fans who cheer us on. I love the passion of our sport.” 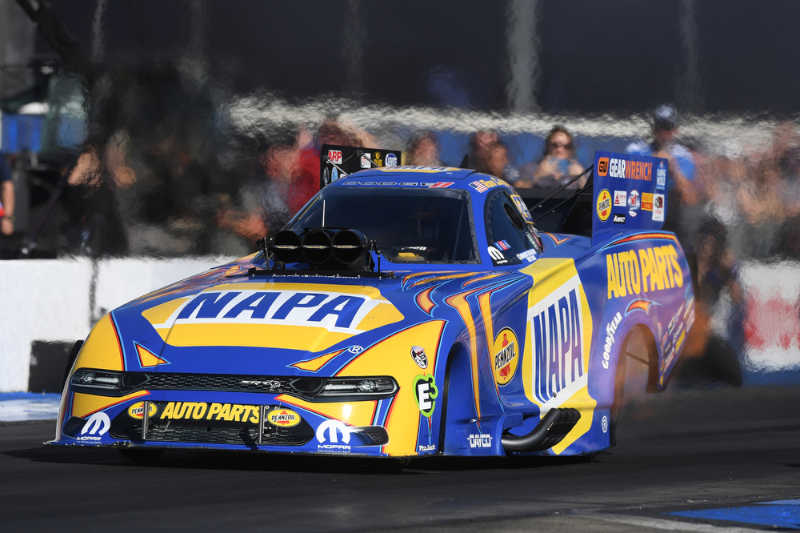