Capps is eager for the 2014 Mello Yello series after a solid effort by the NAPA AUTO PARTS team produced three wins this year.

Capps certainly was disappointed, but that battle that went down to the semifinals of the Auto Club World Finals at Pomona, Calif., is why he, crew chief Rahn Tobler, assistant John Collins and their NAPA AUTO PARTS Dodge Charger R/T grew closer and better as a team. 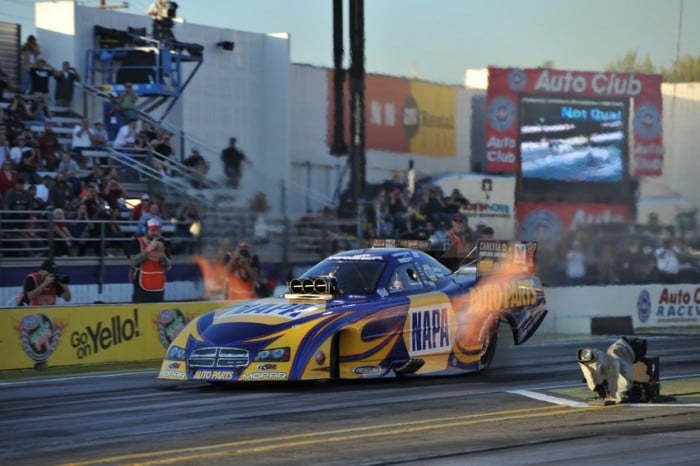 When he arrived at the Finals on Thursday, the Funny Car championship was already locked up but he already had won three of his 41 events titles this season. Despite losing Sunday in the second round of eliminations, Capps again believes it will make the NAPA AUTO PARTS team stronger.

“We would’ve liked to do what we did last year and fight for the championship here,” Capps said of the race close to his home in Carlsbad. “In Pomona, Rahn Tobler decided to get a jump on some things that we will need to try at preseason testing and there’s no better way to test them than under race conditions.

“I have to say I’m so happy that we did. We ran great in Vegas (two weeks ago) and stayed and tested there after the race. We learned more about our new set-up for the race car with parts and pieces DSR makes. It’s going to make us all stronger.

“It was a great weekend. We were experimenting a little bit but at the same time to have the performance we had while still learning this new configuration Tobler is working on really makes be eager to get to testing in January. We wanted to end the year strong which we did.

Despite qualifying 12th and not having lane choice in the first round Sunday against former world champion Robert Hight, Capps and the NAPA team produced a time of 4.089 seconds at 315.19 mph even though the higher-qualified Hight had lane choice. But Capps lost traction in the second round and veteran Gary Densham went on to win.

“We qualified OK, but we showed ourselves that we had what it took in first round to get up there and get the win.

“We can put it all behind us now. The points are going to reset and we’re going to get ready for 2014.”

The following are Capps’ results from Pomona and DSR statistics with the 2014 Mello Yello schedule: