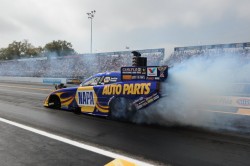 READING, Pa. (Oct. 6, 2013) – Ron Capps along with NAPA AUTO PARTS crew chief Rahn Tobler gained ground on nearly all the Funny Cars ahead of them in the NHRA Countdown to the Championship standings.

But Capps and the Don Schumacher Racing Dodge Charger R/T ran into the hottest car in NHRA in the semifinals when they faced John Force, who won the previous event near St. Louis and was the No. 1 qualifier and event winner for this weekend’s NHRA Nationals at Maple Grove Raceway near Reading, Pa. 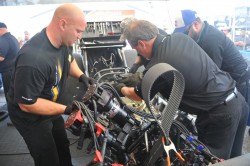 “Force has the type of car like we had last year at this time,” said Capps, who has won three event titles this year in the Mello Yello Series. “The Countdown is all about hitting your stride at the right time. Force didn’t have it going on early in the year, but he has one tough car right now.”

En route to the semifinals, Capps beat higher-seeded Johnny Gray, a DSR teammate, in the opening round and then Matt Hagan, another DSR driver, in the second round. Hagan, who arrived at Maple Grove as the points leader since early June, relinquished the lead to Force during qualifying.

Capps leaves Maple Grove sixth in points and 160 behind Force.

“After we left here last year and went to Vegas we won that race and it put us right back in position for a chance to win the championship. All we can do is keep moving forward. We gained some ground on all the drivers ahead of us but one.”

Capps, who owns 40 NHRA titles, has won five titles at Las Vegas including four times at the fall race, which is in two weeks. Las Vegas will be followed by the Finals at Pomona, Calif., which will end the 24-event Mello Yello Series. 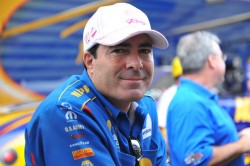 “We have to make these last two races our time of the year,” Capps said. “I know we have the talent to win and we’re going to the last two races with a full head of steam.

“We’ve shown we can bounce back and be competitive. I look forward to going to Las Vegas now.”

The following are Capps’ summary and updated standings from Maple Grove Raceway: