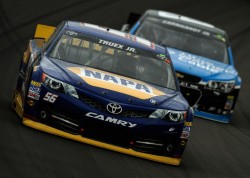 The Michael Waltrip Racing driver started 13th but lost two laps to the leaders when a caution came out as he finished a green flag pit stop on lap 87. Truex remained poised to quickly regain both laps by taking the wave around on lap 90 then earning the free pass several laps later when NASCAR threw a caution flag.

A series of air pressure adjustments during services on laps 114, 118 and 139 improved the NAPA Toyota’s handling. It allowed Truex to race into the top 10 by lap 175 and into the top five at lap 185. 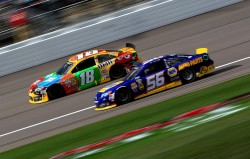 Then with less than 40 laps to go, a caution flag flew just after the NAPA KNOW HOW crew completed another pit stop under green. This time it cost the team a lap and dropped Truex from eighth to 28th place.

For the second time in the 267-lap event, crew chief Chad Johnston implemented the wave-around strategy to give the NAPA Racing team a chance to race back onto the lead lap. It paid off when the event slowed for a 15th time. It created a 20-lap shootout for Truex to drive from 25th to a 19th-place finish.

“What a strange day,” said Truex. “We lost laps two times due to caution flags coming out when we were in the middle of completing stops under green. The first time it cost us two laps but we rallied back quickly to race back onto the lead lap. I am really proud of my guys because we got back into the game and were within striking distance of a top-five finish. Unfortunately the second time we lost a lap, the timing of it all was against us. I guess we should have pitted one lap later than we planned. The NAPA guys did a great job for me today. It’s a shame we kept losing all our track position to yellow flags.” 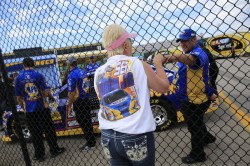