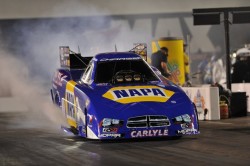 CONCORD, N.C. (Sept. 15, 2013) – It wasn’t the weekend Ron Capps wanted for the first time his sponsor Carlyle Tools had its name on an NHRA Mello Yello Drag Racing Series event, but it could have been a lot worse weekend.

After parts maladies hampered his Carlyle Tools/NAPA Dodge Charger R/T Funny Car performance in qualifying on Friday and Saturday, Capps was able to advance to the second round and maintain his hold on second place in the NHRA Countdown to the Championship playoff after the Carlyle Tools Carolina Nationals presented by NAPA Auto Parts at zMAX Dragway near Charlotte.

Capps started the event 30 points behind Don Schumacher Racing teammate Matt Hagan who extended it to 72 points after advancing to the championship round Sunday.

“We’ll stay and test on Monday to get ready for Dallas,” Capps said. “Our team is better than a second-round finish. We know that. A lot of points moved around today. Hagan is moving out there pretty good so we’re going to have to go to Dallas and battle back.”

Capps opened Sunday with a solid run of 4.103 seconds at 308.14 mph to beat the higher qualified Alexis DeJoria but lost in the next round to Courtney Force. 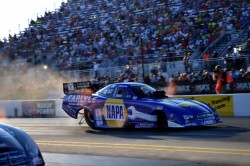 “We just got behind in qualifying,” Capps said. “We broke the rear end on the first run Friday and then had ignition problems on Friday night’s run.

“We only had the late Saturday afternoon run to get the car ready for eliminations and were able to go out in the first round and run what we did was tremendous. I was really proud of (crew chief Rahn) Tobler and our guys.

“But you just can’t get behind. We suffered from it. We just didn’t get enough runs in qualifying to get the data we needed for Sunday and to end up running against Courtney who ran good against us.”