Ron Capps has been vying for a Texas NHRA FallNationals trophy for more than 20 years, and on Sunday afternoon, the NAPA AUTO PARTS Dodge Funny Car driver finally realized his goal of winning the event’s signature black champions’ cowboy hat when he raced to victory at the 36th running of the Ennis race. Capps’ win at the Texas Motorplex, which marked the halfway point of the seven-event Countdown to the Championship playoffs, was his second triumph of the season, and 68th overall. 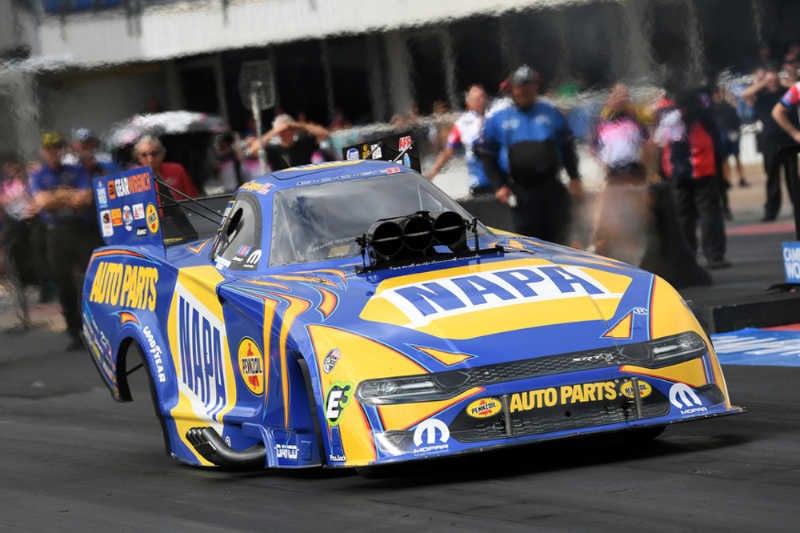 Led by co-crew chiefs Dean ‘Guido’ Antonelli and John Medlen, the 2016 Funny Car world champion entered the race weekend ranked second in the Countdown standings and 59 points behind his No. 1-ranked teammate and defending series champ Matt Hagan, whom he went on to defeat in the final round. Capps’ triumph ensured the Don Schumacher Racing dogfight will continue to intensify heading into the final stretch of the season as he and Hagan battle a deep Funny Car field to try and score DSR’s 19th world championship. A mere 33 points, or less than two rounds, separate Hagan and Capps with three races remaining before a champion is crowned. Although the cushion between Capps and the No. 3 ranked driver, Cruz Pedregon, is larger at 80 points, Capps isn’t taking anybody lightly. 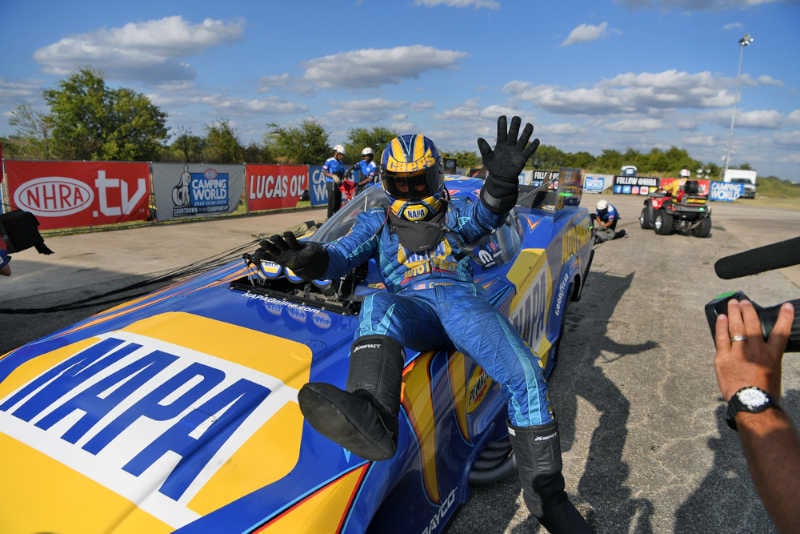 “I can’t tell you how many times I’ve made the mistake over the years of counting out, first of all, John Force, at anything,” said Capps, a 27-year nitro veteran who finished as the ‘bridesmaid’ four times before finally capturing the 2016 series title. “Everyone’s been bit by that. He always seems to find a way to climb his way back in. We have Force, and J.R. (Todd) and Cruz breathing down our necks. Tim Wilkerson, Robert Hight and I were talking, and we’ve been through this championship fight many times, but it’s never been this tight top-to-bottom. Anybody can win on any given Sunday, so it was good to gain a little bit on Hagan this weekend. 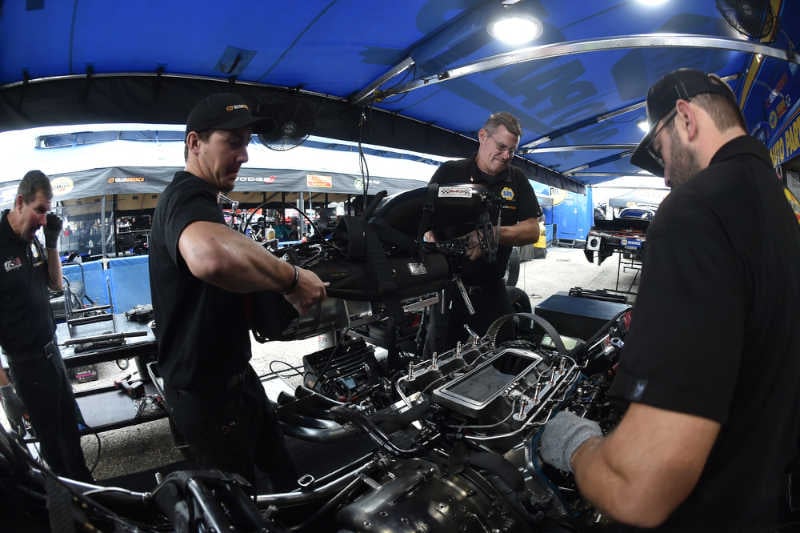 “Hagan, and (crew chief) Dickie (Venables), those are my teammates and you don’t wish ill on anyone out here but I’m certain when I was leading the points a few times this year, they were hoping I would smoke the tires or we would lose early because you want to gain ground. So, I was hoping (Bob) Tasca would do the dirty work second round when they had Hagan, and then I thought J.R. had a good chance because they had a good running car, but Hagan and Dickie, they just kept surviving.” 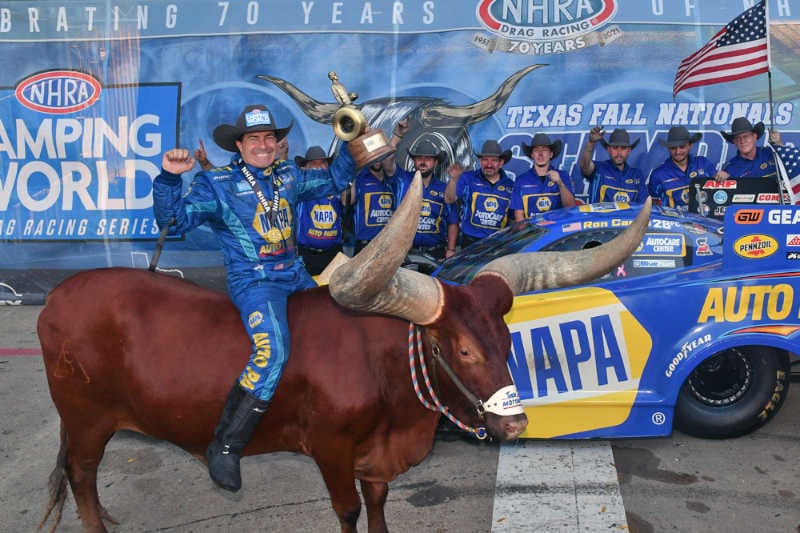 Capps’ road to the FallNationals winner’s circle started with a solid qualifying performance which allowed him to collect four bonus points and secure the No. 2 qualifying position to start race day. He then went on to clock three consecutive sub-four-second passes during eliminations, defeating Jack Wyatt, Paul Lee, and Cruz Pedregon to earn a bid to the finals for the fourth time in 2021. Against Hagan, who entered the race weekend fresh off a win from St. Louis, the most recent race on tour, Capps used a stout .046-second reaction time coupled with a solid 3.930-second E.T. at 326.87 mph to propel him to the holeshot win over his stablemate, who posted a 3.919 E.T. in the losing effort. 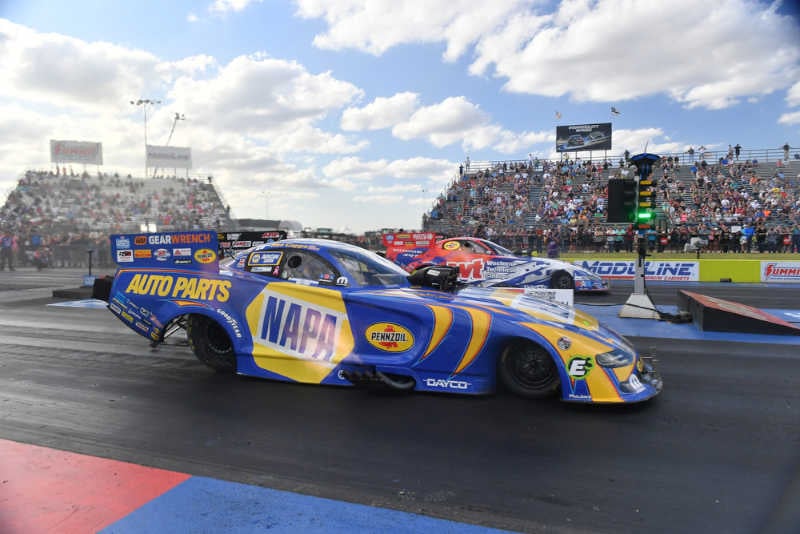 “I’m very fortunate to now be able to work with Guido and Medlen. I’ve known them for many, many years, and it’s been really fun,” said Capps of his team’s stellar 2021 performance which has seen them advance to the semifinals or beyond nine times. “We have a really great race car, so I’m just trying not to be the weak link. It raises my intensity every time to not be second leaving the starting line, and to not do anything wrong, and just make sure that I do the best I can every time.” 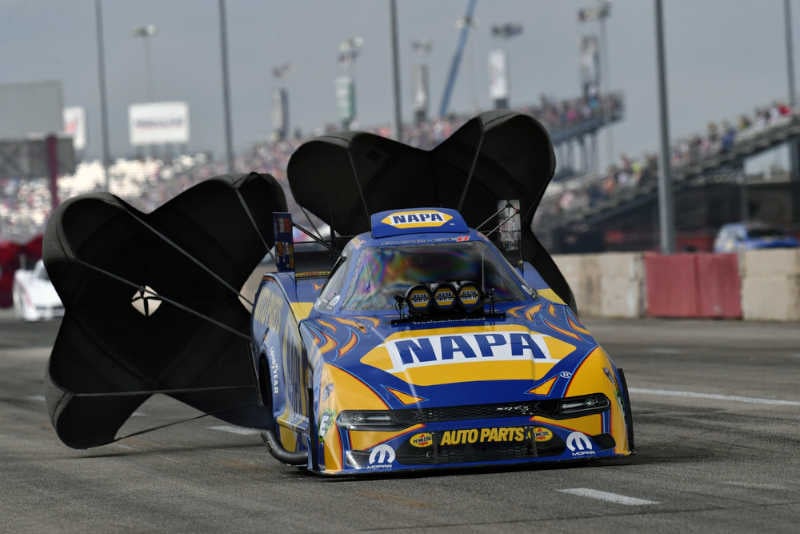 Sunday’s victory was Capps’ first FallNationals triumph, and first Texas Motorplex victory since winning the now discontinued Spring race in 1998. It also marked national event win No. 366 for Don Schumacher Racing, drag racing’s winningest team. The NAPA AUTO PARTS team will continue their quest for the 2021 series title when the NHRA heads to Bristol, Tenn., next weekend, where Capps returns as the most-decorated Funny Car racer in the track’s history with five Bristol Dragway triumphs.