As important as the engine is to your vehicle, it’s the battery that routes voltage to the starter, which turns over the engine. The battery also supplies electricity to power all the lights, the audio and navigation systems, computers and various electrical-dependent parts. On occasion, a car battery won’t hold a charge. If that happens, your vehicle won’t go anywhere. Here’s how to diagnose and fix the problem so you’re never left stranded.

To confirm that the car battery won’t hold a charge, you need to rule out other possible problems first. Begin by turning on the headlights. If they provide full brightness, then the problem isn’t with the car battery. Instead, you likely have a wiring issue or a faulty starter. On the other hand, if the lights are not as bright as normal, then the car battery is the issue. 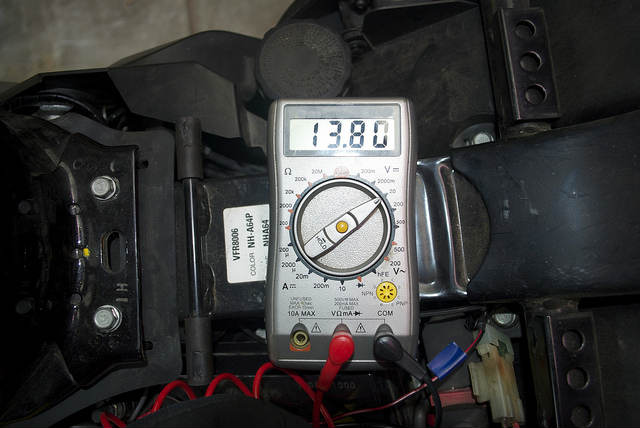 You’re now ready to use a voltmeter to gauge how much “juice” your battery has. Attach the red lead to the positive terminal and the black lead to the negative terminal. If the voltmeter reads between 12.65 volts and 12.77 volts, then the battery is fully charged. Anything less than a full charge means you need to continue to look for an answer.

One significant reason why a car battery won’t hold a charge is age. Obvious signs that your battery is too old and worn out include corrosion and cracking. If it’s at least four years old, then it should probably be replaced. For younger batteries, a car that isn’t started for days or weeks can also lose its charge. Move on to the next step for the solution to this problem.

If you have a young battery, you can ensure it has a sufficient charge by keeping it connected to a battery maintainer, also known as a battery tender, when parked overnight. With the hood up, you first connect the battery maintainer to a household outlet, then connect the red (positive) followed by the black (negative) connectors to the respective battery post. The maintainer unit itself can sit on any flat surface, such as the leading edge of the car in front of the fan.

With this battery maintainer, you have a choice of three modes for charging: Soft start is ideal for severely depleted batteries; recondition is best for distressed batteries; and enhanced is for long-term storage, such as for your classic car or occasionally used off-road vehicle. Once connected to a household outlet and to the car battery, the maintainer turns on automatically and continues to provide electricity as long as necessary.

As long as other possible electrical problems have been ruled out, the battery maintainer should do its job. When constantly connected, it’s the perfect solution for parked vehicles that are seldom driven and have a battery that won’t hold a charge.

Check out all of the batteries available on NAPAonline or trust one of our 17,000 NAPA Auto Care locations for routine maintenance and repairs. For more information on car battery issues, chat with a knowledgeable expert at your local NAPA Auto Parts store.

NAPA Know How Blog If Your Car Battery Won’t Hold a Charge, Try These 4 Steps