Since NAPA’s annual “Get Back & Give Back” campaign launched in July 2012, the program has raised more than $9 million in support of the Intrepid Fallen Heroes Fund (IFHF). In 2012, NAPA presented a check for $350,000 to the IFHF and the amount has grown larger each year since. The donation for 2017 exceeds $2 million.

“When NAPA developed their ‘Get Back and Give Back’ campaign they intended to give it a military focus and chose the Intrepid Fallen Heroes Fund,” said Dave Winters. “We are very happy to work with all the members of the NAPA family in support of our mission. “I am continually amazed at the tremendous grassroots effort by NAPA representatives all over the country to promote our mission and give back to those who have served and sacrificed. NAPA has built an amazing operation dedicated to those who have worn our nation’s uniform.”

NAPA Family Gives Back in Many Ways

Since the first year, NAPA’s “Get Back and Give Back” Big Event has been based on a simple premise: NAPA pledged to “give back” $1 to the Fund for every consumer rebate redeemed for NAPA batteries, starters and alternators; and for each battery ordered via Direct Ship during a specified time period. NAPA also pledged to “give back” $2 for qualifying installations at NAPA AutoCare Centers. Consumers were able to participate as well by donating all or a portion of their mail-in rebates to the IFHF. 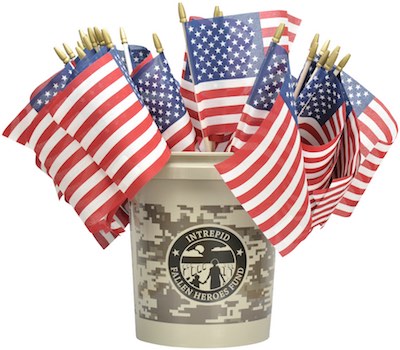 Funds were also raised through the sale of “We Believe in Heroes” t-shirts and bracelets. They were available for NAPA AUTO PARTS stores and AutoCare Centers to use as giveaways or to sell as a way to raise additional funds for the IFHF. For every t-shirt purchased NAPA made a $3 donation with $.50 donated for each bracelet.

Two of NAPA’s “Know How” to Ask monthly items offered another fundraising opportunity. Microfiber detailing cloths and American flags were featured in March and June respectively, with $1 of the $1.99 consumer cost donated to the IFHF. In addition, consumers could purchase a five-gallon NAPA IFHF bucket for $3.99 and receive 20 percent off three or more items that fit inside, with NAPA donating $1 to the IFHF for every bucket sold.

Chase Elliott also made a contribution by auctioning a pair of shoes. At July’s Daytona NASCAR race, the NAPA driver wore a pair of “Support Our Troops” camouflage racing shoes to complement the special stars and stripes paint scheme featured on the #24 NAPA AUTO PARTS Patriotic Chevrolet SS. Following the race, the Chase Elliott Foundation put the racing shoes up for auction through the NASCAR Foundation’s online auctions site. The pair fetched a $2,000 donation for the IFHF.

There were many manufacturer promotions throughout the year as well that contributed to the overall amount donated to the IFHF. Owners of NAPA stores and AutoCare Centers across the country also held special fundraising events in support of the organization.

The Backyard BBQ and Lee Brice concert held at the IFHF’s first Intrepid Spirit Center at Ft. Belvoir in Virginia was a new NAPA initiative for the 2017 “Get Back Give Back” campaign. The Backyard BBQ helped raise money through a national sweepstakes that encouraged consumers to donate to the Intrepid Fallen Heroes Fund for a chance to win tickets to the event. As part of the July campaign, NAPA offered a free digital download of Brice’s song, “Boy” with the order of a We Believe in Heroes t-shirt at NAPAonline.com.

“The Need is Still There”

“Everyone at NAPA is happy to participate and give back to our military men and women by supporting IFHF,” said Winters. “The need is still there. The conflicts in Iraq and Afghanistan may have wound down, but the continued rise in terrorism and the many conflicts around the world that engage our American Forces are continuing to place these men and women in danger every day. Traumatic brain injuries have risen by more than 30 percent between 2015 and 2016, and the injured still need care. We must keep charging full speed ahead to guarantee that they get the treatment that can save their lives.

“Thank you NAPA for going far above the call of duty in this critical effort!”

The first of five Intrepid Spirit Centers are now in operation and the sixth has just been completed at Joint Base Lewis-McChord (JBLM), Washington, the first in the western United States. The seventh center is under construction at Camp Pendleton, California, and is expected to begin operating in March. This will be the second center at a Marine Corps base as well as the second west coast center. Each Intrepid Spirit Center is approximately 25,000 square feet and costs between $11-$12 million to build and equip. Upon completion, the Centers are gifted to the Department of Defense for staffing and operations. The purpose of the Intrepid Spirit Centers is to provide the most advanced diagnosis and treatment to our service members injured in combat or in the regular performance of their military duties.

While 100 percent of every IFHF donation goes directly to the project, the IFHF trustees cover the operating expenses. Speaking on behalf of all the soldiers, veterans, and families that will be returned to the life they want and deserve, the Intrepid Fallen Heroes Fund expresses its profound gratitude to NAPA and all the employees and friends who so generously contribute to building and equipping the Intrepid Spirit Centers.