You might think cars are a red-blooded American thing, but the truth is we aren’t the number one car producer in the world — and we weren’t the first, either. That honor goes to the machine you see above — built by Karl Benz (later to found Mercedes-Benz) in 1883. So number one on the chronological list of car manufacturers by country was Germany. 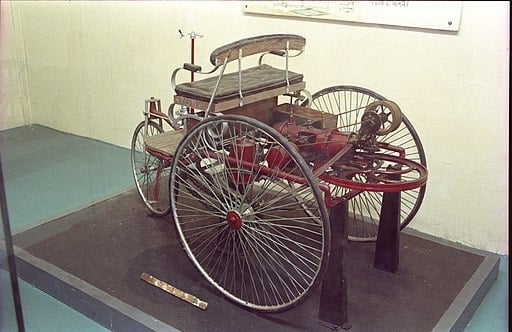 Let’s Start the Countdown of Car Manufacturers by Country!

7. South Korea: South Korea is a relative newcomer to carmaking, having only started in 1955, and that was just one vehicle — a modified Jeep engine put back in an American Army Jeep. Building cars for sale didn’t start until 1962, with the company we know as Kia.

6. Mexico: Our neighbor to the south has been building cars since 1921 — but only for established carmakers from other countries (Buick was the first). There is no Mexican car brand as such, but a lot of cars that are sold in the USA are built in Mexico and then shipped across the border including models from Audi, Chevrolet, Dodge, Ford, Honda, Kia, Nissan and Volkswagen.

5. Germany: Germany is the birthplace of the automobile as we know it, and some very prestigious brands (Mercedes-Benz, BMW, Audi, Porsche and Volkswagen) call it home.

4. India: India’s automotive industry began in the 1940s, but didn’t really take off until the 1980s, when people of more modest means began buying vehicles. TATA Motors owns Jaguar and Land Rover, though they continue to be built in the UK. Mahindra currently exports farm equipment to the U.S. and is eyeing a possible move into the truck market here.

3. Japan: Japan built its first car in 1907, but it wasn’t until the 1960s that they became a major player in other countries. In the 1970s, as the price of gas increased and American-built automobile quality decreased, carmakers like Toyota, Honda and Nissan captured a significant part of the American market with fuel-efficient, well-built cars and trucks, and continue to be successful.

2. United States: In the late 1800s and early 1900s, dozens of enterprising young men started companies usually bearing their name and began building what some called “horseless carriages.” Perhaps the most famous of those today is Henry Ford, since he revolutionized car building with the assembly line. Cars built here are not only sold here — the U.S. is the third-largest exporter of automobiles in the world.

And the number one car-building country in the world is …

China: And it’s not even close. In 2018, China built 27,809,196 cars and trucks — that’s more than the United States, Japan and India combined. No Chinese-built cars are imported to the U.S. yet, but that could change very soon. China built its first car in the 1920s, but it wasn’t until the early 1990s that private ownership of cars has become common in that country, and the industry has been churning them out to meet the demand of the 1.4 billion people who live there ever since.

Check out all the maintenance parts available on NAPA Online or trust one of our 17,000 NAPA AutoCare locations for routine maintenance and repairs. For more information on where cars are manufactured, chat with a knowledgeable expert at your local NAPA AUTO PARTS store.

NAPA Know How Blog Car Manufacturers By Country: Where And When