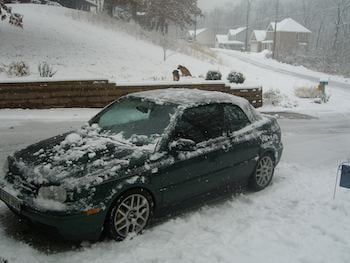 The coldest winter months are the worst time for your car to break down. You’ve probably prepared for common winter driving emergencies, but not all challenges you face on the road are as readily anticipated. What do you do with a car overheating in the winter, for instance?

The answer could be a few things, but remember: Just because it’s cold outside doesn’t mean your engine can’t get too hot. Here’s a look at a few reasons why it may be running hot even in the wintertime.

Similar to the thermostat issue, air in the coolant lines can also cause the coolant to not flow through the engine properly. A leak in a cooling system can allow air to enter the system and mix in with the coolant. When it meets the heat from the engine, the air will expand and force the flow of coolant to slow down and even stop completely, which will, in turn, cause the engine to overheat. Flushing out all of the coolant and replacing the hoses will fix this issue, but you’ll also need to use a bleeder tool to push the coolant through the lines and ensure the system is free of air bubbles.

Your vehicle’s engine relies on heat in order to burn air and fuel, which is what pushes the pistons and makes the engine run. While it needs some of this heat in order to move parts, excess heat must be emptied from the drive system through a few different routes. The majority of the heat from combustion is sent out through the exhaust pipe and evacuated from the engine entirely. Some of it is carried away by coolant moving through cooling lines inside the engine block to the radiator, where it’s cooled by rushing air. Believe it or not, even your motor oil transfers some of the heat away.

It isn’t very likely, but your overheating engine may be due to heat getting trapped in the exhaust system and not venting properly. While this is most likely not going to happen due to a mechanical failure, it’s possible that mice crawled into the muffler and built a nest inside your exhaust pipe. The pipes could also have become bent and closed up as a result of your car bottoming out on some ice or a pothole. While this seems like an odd thing to have happen, it’s easily repaired by replacing the damaged or clogged exhaust pipe.

An overheating car can be frustrating any time of the year, but especially when it’s cold outside. Cold air doesn’t necessarily mean that the engine will run cooler at all, and if your car is overheating, it’s most likely due to a mechanical issue. Checking the thermostat and coolant are your first steps, but there could be other issues if those don’t seem to fix it. Getting to your trusted mechanic is critical if you can’t resolve the issue yourself.

Check out all the heating & cooling systems parts available on NAPA Online or trust one of our 17,000 NAPA AutoCare locations for routine maintenance and repairs. For more information on the signs of your car overheating in the winter, chat with a knowledgeable expert at your local NAPA AUTO PARTS store.

NAPA Know How Blog Why Is My Car Overheating in the Winter?