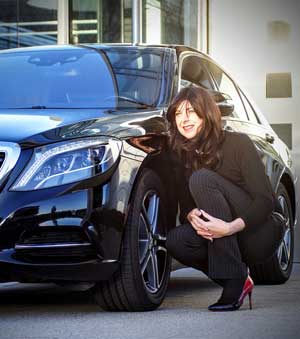 The NPR report “Women Dominate Car Buying Decisions” recently noted that women “play a leading role in 85 percent of auto purchases.” When it comes to cars for women, they research it just like any other purchase. Whether it’s an apartment, a home appliance, hardware or tools, by the time women get to the buying floor they already know what they want.

Here are some great car choices and what a few women had to say about their car-buying decisions.

The Audi A5 is on high on the list of cars for women. “This is my third one,” remarked Glynnis Hazan, while talking about her Audi A5 Cabriolet. “Audi’s are well-made, heavy German cars without the flashiness of some other German cars, and with a better price point.” She initially chose the car for the all wheel drive and the trunk room that a soft-top offered, however, her newest model A5 does not have as much room for her golf clubs. Nevertheless, she adds, “At the end of the day, when that top is down nothing else matters.”

Mercedes-Benz researchers noted recently that half of the C-Class Coupe buyers are women. The C-Class is dressed up with a luxurious interior that surrounds you, has plenty of storage space and is an affordable entry into the Mercedes-Benz market. Automotive journalist Nicole Wakeman said, “The C-Class looks slick without being too in your face. It’s classy and upscale, but not flashy,” adding, “The C-Class manages to get that low, sporty stance, but still have a seating position that lets you step out rather than awkwardly slide out the door.”

For a college student attending The University of Michigan, the Ford Edge SUV was a perfect choice. Here’s what one college woman had to say about her first car (fondly named Big White): “I loved that I could trust my Ford in inclement weather. Living in Michigan, this was imperative when winter came around and dumped treacherous snow and sleet for several months at a time.” She also noted, “The Edge felt like a smaller car but was incredibly spacious, and every seat was comfortable. I could fit five people in it without any sense of being crowded.”

Diane Hersey researches everything before she buys. She chose a Subaru Forester for her family car. “I like the way it looks and handles, and the cabin is laid out in a straightforward and logical way.” Diane’s family had seven years with their first Forester and loved the newest improvements with gas mileage, technology and NVH (noise, vibration and harshness). With EyeSight driver assist, Diane doesn’t feel the need to be such a vigilant co-pilot. Plus, they were able to sell their old Forester at an excellent price.

The Toyota Prius doesn’t shout hybrid, but if you care about the environment, the Prius makes you feel virtuous. The ergonomics are female friendly, and the layout of the cabin is clean and intuitive. The Prius also has plenty of pluck on the highway and will earn you kudos for mileage. When Shelley moved to NYC, she bought a Prius to get around. It filled her need for an environmental car plus she could always find parking spaces; it was a smooth ride (even over potholes) and very responsive.

Women know what they want when buying a car for themselves or their families. Comfort, reliability, safety or just that wonderful feeling of letting loose in a luxurious vehicle are some points that women research. Let’s see what happens when it comes to autonomous cars.

Check out all the maintenance parts available on NAPA Online or trust one of our 17,000 NAPA AutoCare locations for routine maintenance and repairs. For more information on cars for women, chat with a knowledgeable expert at your local NAPA AUTO PARTS store.