It capped off a record-setting season for Gilliland, a 16-year-old rookie from Sherrills Ford, North Carolina in the No. 16 NAPA AUTO PARTS Toyota Camry for Bill McAnally Racing. 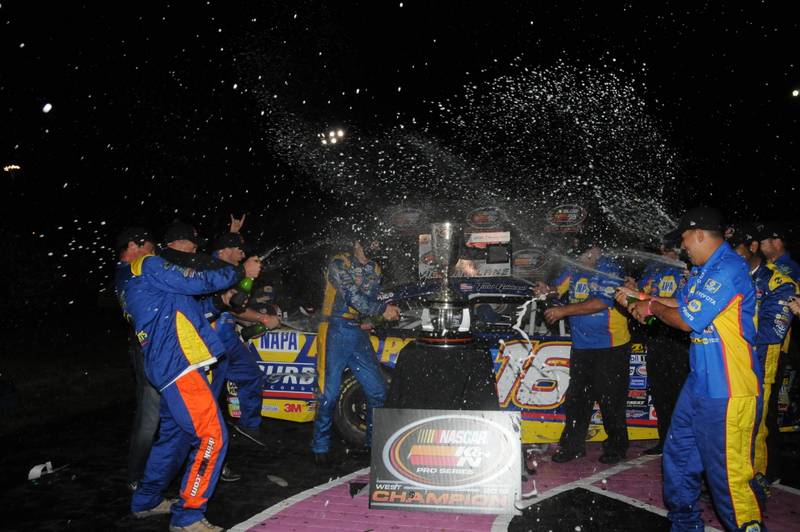 “We had an amazing season,” said Gilliland, a member of the NASCAR Next program that spotlights NASCAR’s rising stars. “I’ve got to say thank you to NAPA AUTO PARTS and Toyota, TRD, Frontliner Enterprises – everyone that made it possible – and to Bill McAnally for giving us the opportunity.”

“To have six wins out of 14 races in my rookie year is amazing, better than anything we ever expected,” he said.

Gilliland is the youngest to win the series championship at 16 years 5 months old, as well as becoming the youngest champion in the history of the NASCAR national or touring series. 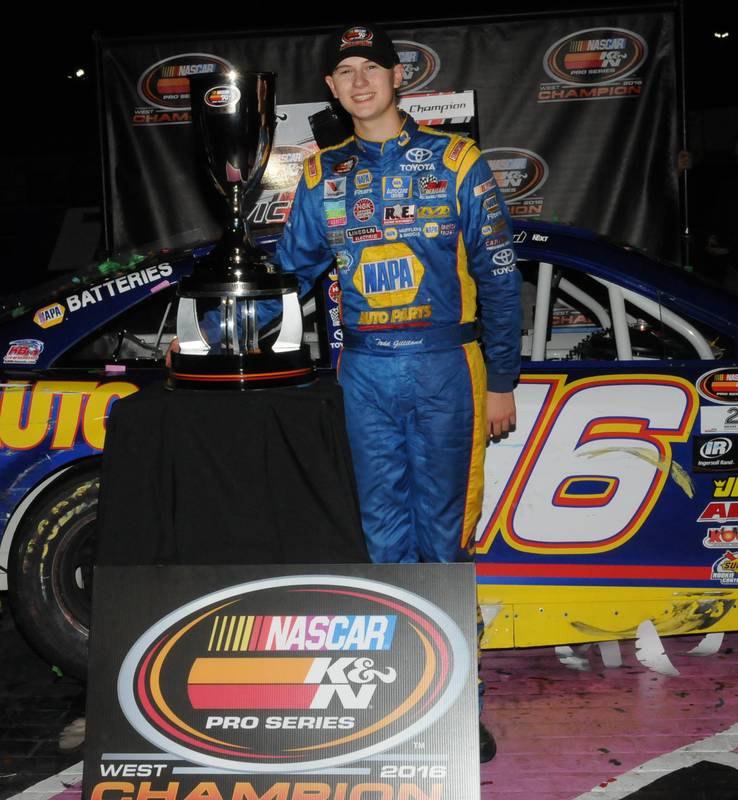 Gilliland started from the pole after qualifying was cancelled due to weather issues. He quickly settled into second in the rain-delayed event and remained there through much of the race. A bid for the lead in the late stages of the event left him with damage to his car and he faded in the final laps to finish eighth.

Eggleston, who started seventh on the grid, made a quick charge to the front and shadowed Gilliland through the mid-stages of the race. He capitalized on the battle for the lead to make a thrilling three-wide move to take second and then challenged the leader for the win several times as the laps wound down.

Landauer started fifth and ran a steady race to pick up her second straight podium finish.

Ryan Partridge, who challenged Gilliland for the title, held on for the win in a green-white-checkered finish.

Landauer, a rookie and member of the NASCAR Next program, finished the season fourth in the championship standings and second in rookie points. The 24-year-old New York native – who resides in Charlotte, North Carolina – had seven top-five and 13 top-10 finishes in 14 career series starts this year. 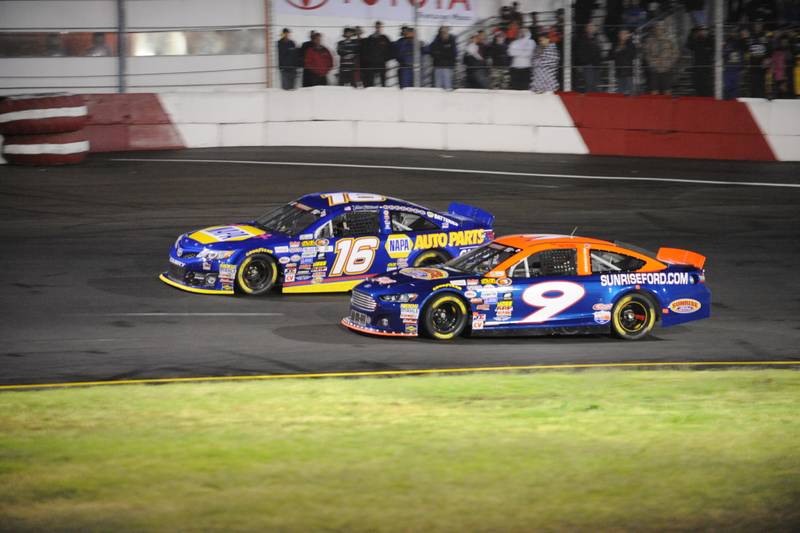 Herbst, a 17-year-old series rookie from Las Vegas, wrapped up his season seventh in the overall championship standings and third in rookie points. He had seven top-five and 10 top-10 finishes in 14 career series starts.

The Roseville race was Moore’s sixth series start of the season and his best career finish as he focused on gaining experience racing select events on this year’s schedule.

Gilliland, meanwhile, is the third generation of his family to capture the series spotlight. His father, NASCAR Sprint Cup Series veteran David Gilliland, won the rookie title in 2004, and his grandfather, Butch Gilliland, won the 1997 championship in the series, when it was known as the NASCAR Winston West Series. 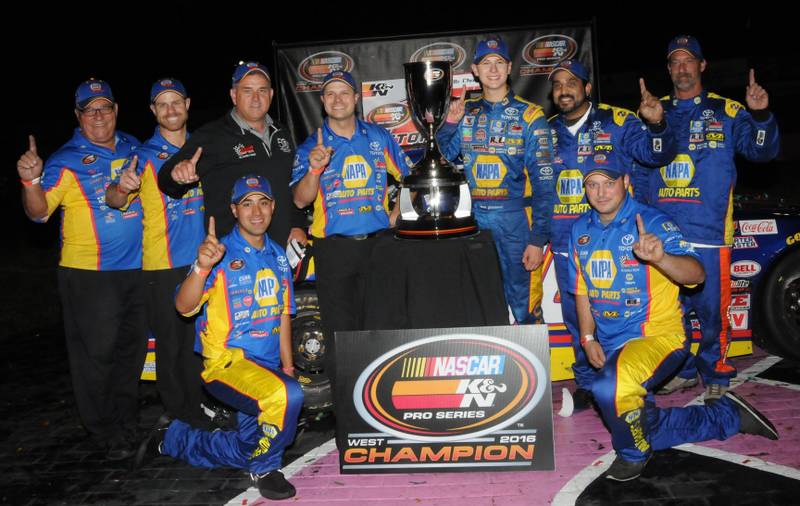 In winning his series debut in the season finale a year ago, Gilliland had become the youngest race winner in the history of the series at the age of 15 years 5 months 28 days.

His six wins this year match Brendan Gaughan’s 2001 mark for the most victories in a season by a BMR driver.

Drivers and teams will celebrate their accomplishments of the 2016 season at the NASCAR Night of Champions Touring Awards celebration at the NASCAR Hall of Fame at the Charlotte Convention Center on Dec. 10. 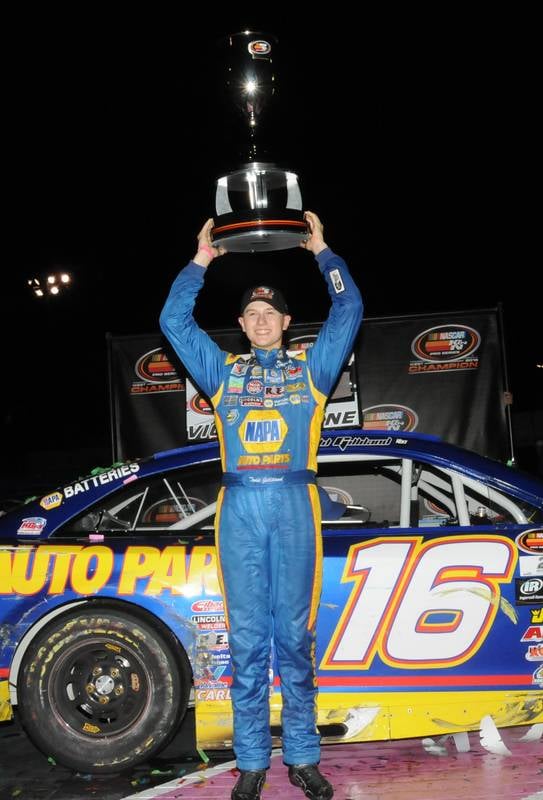