Chase Elliott made history last Saturday night when he clinched the NASCAR Nationwide Series championship. With one race at Homestead remaining for the 2014 season, the driver of the No. 9 NAPA Auto Parts Chevrolet will become the youngest driver ever to win a NASCAR national series championship.

Those of us at NAPA couldn’t be more excited about his outstanding rookie performance. We caught up with Chase this week to find out how it feels to be a champ, and to see what’s in store for the young driver’s bright future. 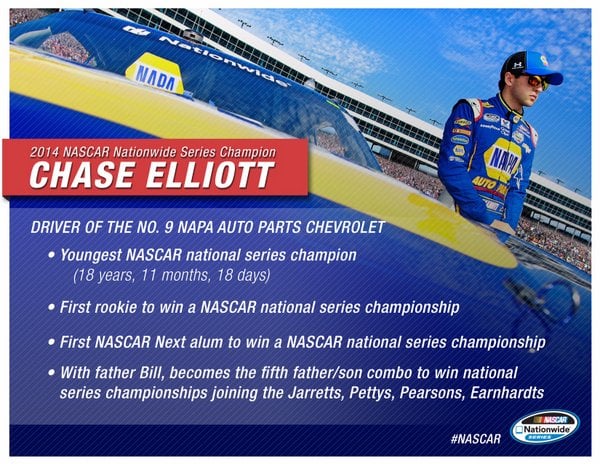 NAPA Know How Blog: At what point during Saturday’s race did you feel confident that you would clinch the championship at Phoenix?

Chase Elliott: I did not feel like we were going clinch until the race was over.

NAPA: You said you weren’t sure if you were supposed to do a burnout, but you lit ’em up anyway. Did anyone question the Champ on that one?

Chase: No, not yet. Everyone seemed to be ok with it.

NAPA: Obviously, becoming the only rookie driver ever to win a national NASCAR series is a huge deal. But what other milestones during your seven or so years of racing helped prepare you to become champion?

Chase: Growing up, I just tried to race as many different race tracks as I could to get a feel for the racecar. I think one win that really sticks out coming up through the ranks was a super late model race, the Snowball Derby.

NAPA: We share photos on the NAPA blog of you and the No. 9 car for each of your races. Often there’s one of you resting during qualifying, staring out at the track through your mirrored sunglasses. What goes through your head as you prepare for race day? Are you anxious? Contemplative?

NAPA: How does your lifestyle off the track – healthy eating and aggressive fitness training – help you to perform your best on the track?

Chase: Like any other sport, the training you put in reflects during the game. At the end of the race, fatigue can be a big factor so training hard keeps me mentally and physically focused.

NAPA: If you could go back to that first race of the season and give yourself one piece of advice, knowing what you know now, what would it be?

Chase: It does not get any easier as the season continues so you just have to stay positive with each weekend’s ups and downs.

NAPA: The motorsports media gushes about your professionalism and maturity given your age. At 18, you’re legally an adult. Do you feel like one? Do you still have opportunities to goof off with your friends, watch the Georgia Bulldogs play?

Chase: Yes, I try to see my friends as much as I can and enjoy being a “kid” as much as I can. With my schedule that can be hard, but I still try to have as much fun relaxing and being myself.

NAPA: We still have one more race, but do you have anything exciting planned for the off-season?

Chase: Just relaxing and enjoying some time away from the track. I plan to go out to Colorado to snowboard.

NAPA: How do you follow a championship performance like you had this year in the Nationwide Series? What goals do you have for 2015?

Chase: My goals do not change much at all. I just want to better our performance each week and compete for more wins.

Never resting on his laurels, Chase Elliott intends to race for another win in the final event of the 2014 Nascar Nationwide Series. Help us cheer Chase Elliott on as he makes his championship official this Saturday at Homestead-Miami Speedway. The race will be televised on ESPN2 at 4:00 p.m. Eastern.

NAPA Know How Blog Chase Elliott: 9 Questions for No. 9