Elliott started Sunday’s race in 13th and after briefly falling out of the top 15 on Lap 25 he began to work his way back toward the top 10, finding 11th after a competition caution on Lap 40. 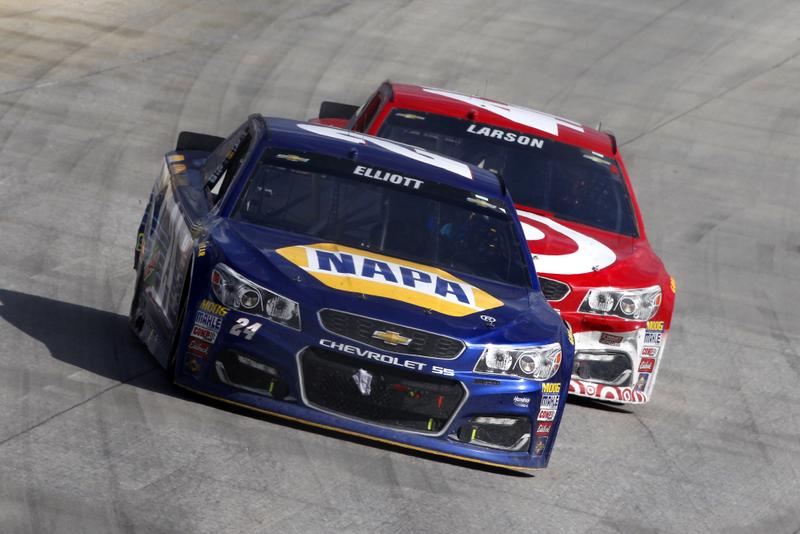 Unfortunately, adversity arose around Lap 119 when Elliott was unable to hear spotter Eddie D’Hondt over the radio. After switching frequencies, the team formulated a plan to use hand signals for Elliott to communicate the car’s handling to crew chief Alan Gustafson if necessary. Luckily, on Lap 145 as the third caution period commenced, Elliott reported that the second radio frequency was far better and the team was able to stay in communication verbally.

Elliott restarted 17th on the subsequent restart due to a four-tire stop, when most competitors only opted to use two tires. However, he battled back and raced into the top 15 shortly after, moving up to 12th just before the sixth caution flag flew on Lap 214.

He found the top 10 for the first time on Lap 231 and by Lap 264 the rookie had moved up to ninth. That became eighth with 92 laps remaining, and he maintained that position thanks to a quick, four-tire stop by the No. 24 pit crew during the 10th caution period. 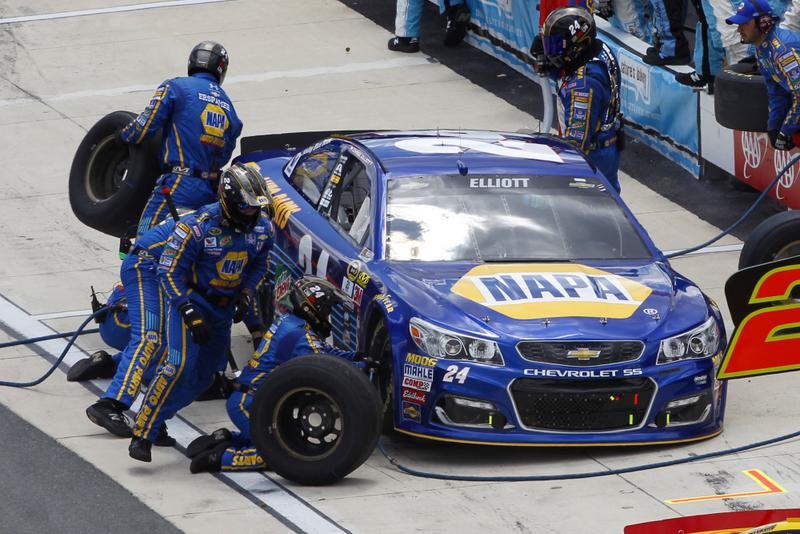 “You did good there,” Elliott said to commend the NAPA pit crew on their effort. “Let’s buckle in and go for it,” Gustafson encouraged back to Elliott and the team.

On the ensuing restart, the Dawsonville, Georgia, native aptly displayed the art of preservation by relying on his dexterity and guidance from spotter D’Hondt to avoid the multiple-car incident that occurred, allowing Elliott to line up fifth once the race returned to green-flag conditions. 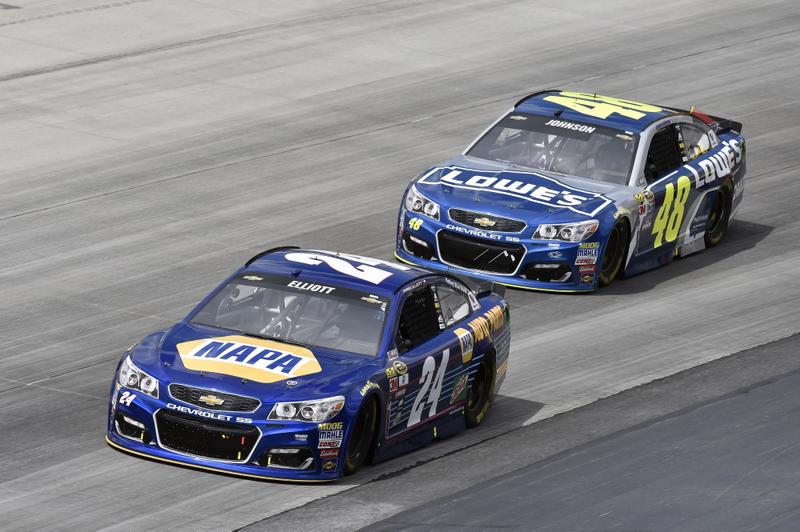 With a mere 30 laps remaining, Elliott found fourth place and six laps later he moved up to third gaining momentum on the top two cars. Elliott charged up to the runner-up spot briefly with 20 laps to go, but wasn’t able to hang on to the spot and fell back to third. He continued battling hard for the position and ultimately took the checkered flag in third.

“That was a heck of a race in my opinion,” 20-year-old Elliott said with a smile on his face as he climbed from his NAPA AUTO PARTS Chevrolet. “Obviously, I wish we could have come out on top. I don’t know that it gets a whole lot better than that as far as a race to the finish. I’m definitely proud to be a part of it. I thought we made a lot of really, really solid gains throughout the day to get our car better and better. I had a lot of fun racing with those guys at the end there. Like I said, I hate to not get the job done and be so close, but we’ll keep digging at it and try to get a little better.” 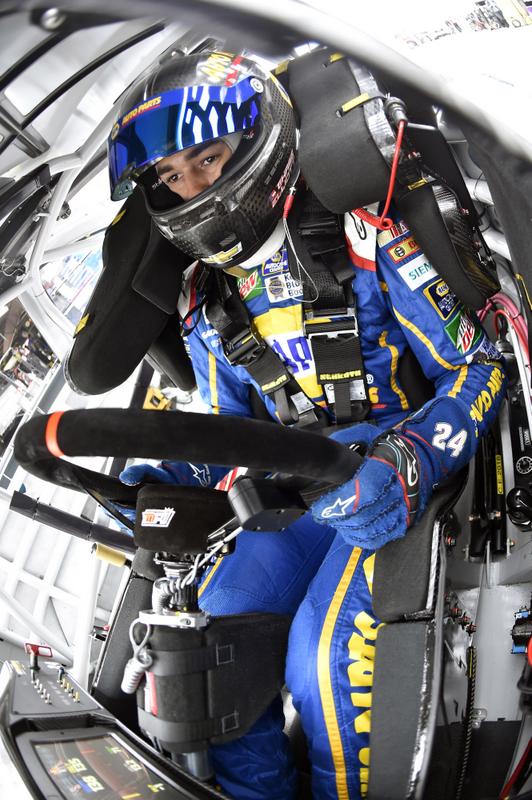 Elliott led the four-car Hendrick Motorsports contingent to the checkered flag with his third-place finish. Kasey Kahne finished closely behind him in fourth while his other teammates Jimmie Johnson and Dale Earnhardt Jr. took home 25th and 32nd-place results respectively.

The next event on the Sprint Cup schedule will be the NASCAR Sprint All-Star Showdown Friday, May 20 followed by the Sprint All-Star Race on Saturday, May 21. The non-points-paying events begin at 7:00 p.m. EDT respectively with live coverage provided by FOX Sports 1. 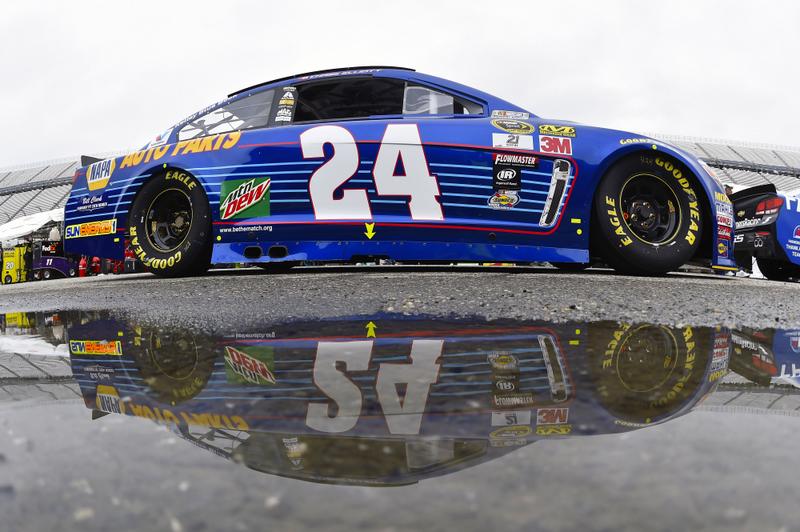 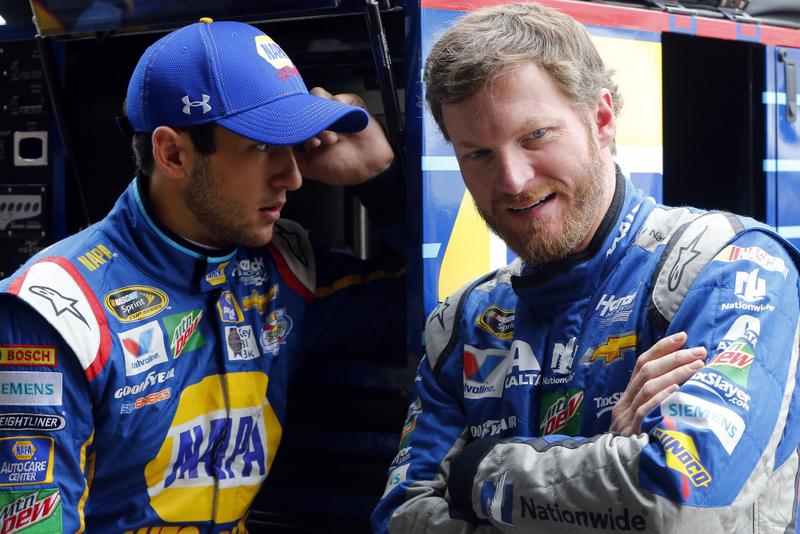