REIGNING ROOKIE: Elliott leads the 2016 Rookie of the Year contender standings heading into Texas Motor Speedway by 61 points over second-place Ryan Blaney and 90 points over third-place Chris Buescher. Elliott has accumulated a total of 287 rookie points this year through the first 33 races. He has yet to win his first race, but claims nine top-five showings – the most by a rookie since Carl Edwards scored 13 in 2005.

YOUNG GUN IN THE LONE STAR STATE: Young gun Elliott will head to Texas Motor Speedway for the second time in a Cup car this weekend after claiming a top-five finish earlier this spring. The rookie will be looking for his first-career Cup Series victory and has had some good luck in the Lone Star State. In 2014, Elliott led 38 laps en route to his first trip to Victory Lane in the NASCAR XFINITY Series. 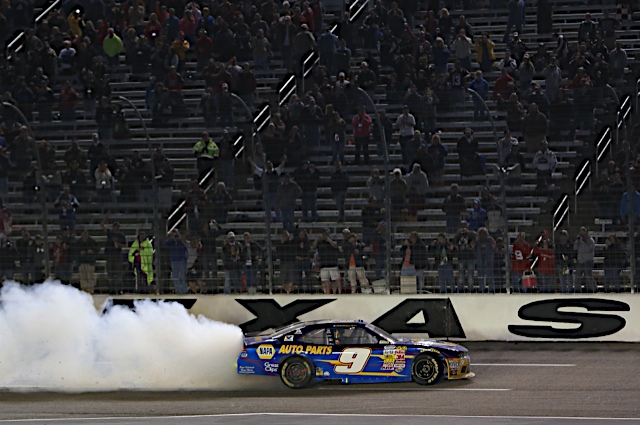 MARK, SET, GET ANIMATED: Nickelodeon shifted into high gear with their series of six race car-themed episodes of the hit animated preschool series “Blaze and the Monster Machines” featuring Blaze, a high-octane race car and guest voice appearances from superstar race car drivers including Johnson, Elliott and Kahne. Four of the episodes have already aired with Elliott as a special guest in three of them. He will be featured in the final two episodes of the series: “The Hundred Mile Race,” premiering Nov. 4 at 11 a.m. ET on Nickelodeon, followed by another all-new episode “The Polar Derby” on Dec. 9. Elliott voices the race car character “Mark Set-Go” – a sensational race starter who kicks off each racing adventure with rock-star style and a signature rhyme.

“Texas is a special place for me. We got our first XFINITY Series win there in 2014 in the NAPA #9 Chevy. A first of anything is going to make somewhere special. Texas I feel like will always be a special place for me. I think more than anything we just have fast cars there and I’ve been lucky enough to drive them. That is kind of the way I view Texas. I’m looking forward to getting back. It’s definitely a place I enjoy going to, I think for that reason in 2014. We’ve had some good runs since then, we’ve had some bad runs since then, so I don’t know that it’s just a guaranteed place where you are going to go run well, but I enjoy going. Like I said, definitely special.”

“For us, we want to improve from where we were in the spring. Our goal is to try to be a contender each week.  As I’ve said for a while, you can’t control how things are going to go. You can’t control wrecks or restarts or a lot of the things that happen in front of you or around you. I think for us we need to focus on what we need to control and try to make that stuff as best we can. We want to improve, but we just want to be a consistent contender. If we can be in that hunt to compete each week, I think we’ve done our jobs.”