Coastal Auto Parts, a family-run group of NAPA AUTO PARTS stores with its main store in Ellsworth, Maine, and 24 additional locations across the state was recently awarded the 2019 Top Drawer Award by the Ellsworth Area Chamber of Commerce. The Chamber’s annual award honors the company or organization that has made a substantial contribution to the growth, development, and improvement to the city and/or state.

“We’re a family-owned business. My entire family has lived in Ellsworth, born and raised. So to be recognized by the community we love so much is a huge honor,” said Matt Boles, president of Coastal Auto Parts. 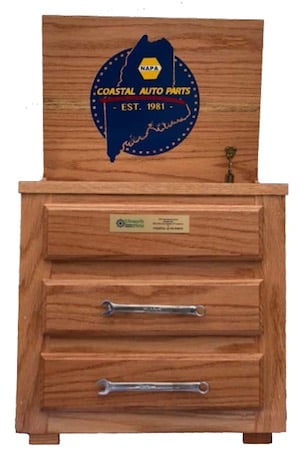 “The NAPA Maine team was extremely proud to attend the Ellsworth Chamber of Commerce event where our largest Independent owner was recognized with the very prestigious Top Drawer Award by the Chamber members,” said James Goodman, Maine Distribution Sales Manager and Eastern Division Project Manager. “This award was voted on by the community and the Boles family was recognized in front of an audience of approximately 400 community members.”

In 1981, Matt Boles’s father Fay Boles and Fay’s stepfather purchased Coastal Auto Parts in Ellsworth. A second location was added in Milbridge in 1986, a third in Southwest Harbor in 1994, and a fourth in Blue Hill in 1999.

The growing company relocated its main Ellsworth store to a 15,000-square-foot building in 2010, marking a period of explosive growth. Coastal Auto Parts then opened a NAPA store in Topsham, followed by two more stores in 2013, two in 2015, three in 2016, seven in 2017, four in 2018. Two more have opened this year, bringing the total number of Coastal NAPA AUTO PARTS stores to 25. Coastal Auto Parts has stores across the state ranging from Machias and Caribou in the northeastern part of Maine to Auburn in the southwestern part of the state.

Growing Up in the Parts Business

The Boles family has strong roots in the community. Fay Boles said he started working in the parts business while he has in high school. “I managed the store when I was 22 or 23 years old. It’s all I’ve ever done. It gets in your blood.”

As for the four Boles’ children, Matt, Chris, Marcia, and Mike, the NAPA auto parts business is also in their blood. Matt said, “Dad bought the store in 1981 and I was born in June of ’82 so I know nothing else but NAPA. A lot of my earliest memories are part of the store and part of the business.”

His older brother Mike added, “I was six when my dad bought his business so pretty much everything I can remember was part of it.”

Chris said growing up he and his siblings would often wait in the store for their father to finish work. “We’d roll around the floor on the creepers, playing with funnels and whatever we could grab as toys,” he recalled.

“My grandfather worked in the store too, which was neat for me to see,” said Marcia. “My grandmother would do statements once a month and my mother would help. I remember coming and helping with that when I was in junior high.”

Rooted in the Community

The six members of the Boles family are Ellsworth High School graduates and all are invested in the community. Coastal has been involved in local youth sports, especially as sponsor for the Ellsworth Football League. Fay Boles was instrumental in starting that organization and currently serves as president. His son Mike is a long-time coach and Marcia has served on the school board. Matt is involved with the Chamber of Commerce.

Coastal Auto Parts has also been part of the Autumn Gold Car Show for many years, and has been a title sponsor the past several years.

Mike said, “We’ve got roots in the community. And that’s really important to all of us. I’m part of something, and I think that’s the best thing.”

The company is in the process of transitioning from Fay and Patty Boles to the next generation. Plans include continued store growth.

Matt said, “We’re so thankful for both of our parents. Dad’s done everything to build the business. And mom being so supportive has helped him grow that business. We’ve got all the tools we’ll ever need to take this business to another level.”