Off-roading is a whole lot of fun. Whether you’re just out on some dirt trails or doing some serious rock-hopping, there’s nothing like taking the not-quite-a-road less traveled. But before you go off-road, there’s a big question you should ask yourself: Should your truck have a skid plate? 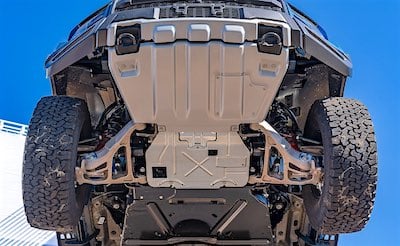 If you’re a serious off-roader, or want to be, a skid plate is a must. But even if you’re a “soft-roader” — someone who sticks to dirt or gravel roads instead of trails — it could still be a good investment.

Why Do You Need a Skid Plate?

No road is perfect. Even on well-traveled paved roads, streets and highways, you encounter hazards and obstacles on a daily basis (potholes, spilled loads, etc.). Once you leave the pavement, debris is a given, as there are no street sweepers out there to regularly clean it up. A lot of the rocks and gravel that make up those roads gets kicked up by your front tires and hurled at the underside of your truck where vital parts like your oil pan, fuel lines and fuel tank are. A hole in any one of those could mess up your day, especially 50 miles from nowhere, without a cell signal.

And then there’s the big stuff — the large, sharp rock that you didn’t see in time as you went around a curve, or the one hidden in the grass as you push your off-roading skills a bit further. A skid plate can mean the difference between getting home in one piece or in a tow truck.

Your mechanic (or you, if you’re a DIYer) will have to remove the plate for routine maintenance like oil changes. But it’s not that big a deal — just unscrew some bolts and it’s off, and it’s that simple to reinstall after the maintenance is completed. Overall, that extra time is worth it to avoid the damage of not having a skid plate installed.

Bottom line: If you spend any considerable amount of time off pavement, you should seriously consider installing a skid plate.

Check out all the skid plates available on NAPA Online or trust one of our 17,000 NAPA AutoCare locations for routine maintenance and repairs. For more information on off-roading essentials, chat with a knowledgeable expert at your local NAPA AUTO PARTS store.

NAPA Know How Blog Defensive Driving: Should Your Truck Have a Skid Plate?