Demolition derby cars lead a hard life. In fact, you could say every car that enters a derby is about to undergo the worst retirement party imaginable. These clunkers, typically at the end of their useful lives, rarely emerge from the other side under their own power. Demo derbies are a great way to have some weekend fun whether you’re a spectator or a driver, but chances are you haven’t heard much about the history of this particular brand of automotive mayhem. It turns out that derbies have been going on for decades and have a colorful past as loud and abrasive as their present.

From Legitimate Racing To Pure Entertainment 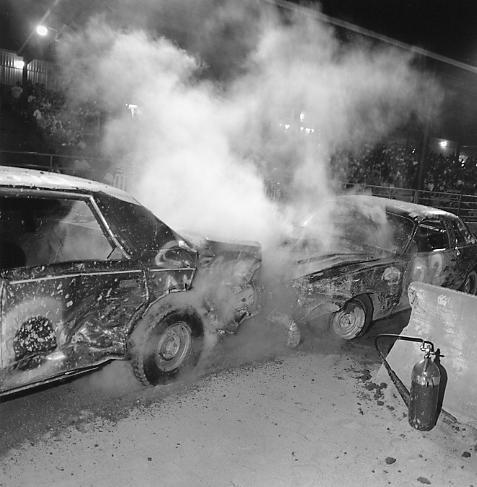 According to lore, the very first “full contact” racing event took place in 1946 in Gardena, California, where a local promoter set a group of jalopies free at Carroll Speedway and charged spectators to view the carnage. It wasn’t until the 1950s, however, that demolition derby cars became a regular fixture at county fairs and race tracks across the country, where they quickly moved away from their motor sports roots and embraced the automotive agony that comes from seeing a crowd of vehicles ram into each other at a high rate of speed.

Demolition derbies became a worldwide phenomenon, too: crowds gathered in Australia, England, Canada and the United States to witness the spectacle. It wasn’t long before fields were climbing in size, with as many as 75–100 cars spinning through the dirt at the same time. Television smelled blood in the water and networks began to broadcast major derbies throughout the 70s and 80s before leveling off and slowly disappearing from the small screen by the end of the 90s.

The Bigger The Better

Traditionally, demolition derby cars have been full-size sedans and wagons, with the latter revered for their additional ramming space between the back axle and the bumper. With all glass removed and a safety cage installed, drivers seek to disable other participants by hitting their rides in the most vulnerable area, the engine bay, in the hopes of puncturing a radiator or cracking a block. Big overhangs and heavy metal guarantee more protection for vital components, but in truth there have been derbies where even brand new automobiles have been used as a promotional stunt.

It’s all about what will attract a crowd and create the biggest, most adrenaline-filled show. This has lead to bizarre situations where lawn tractors, farm equipment and even school buses and motor homes have entered the demolition derby fray. Sometimes extra points or cash prizes are awarded for the most aggressive drivers or the most spectacular collisions, in addition to the money given out to the last driver still mobile at the end of the fracas. With as many as 2,000 derbies underway in the United States alone in a given year, there’s as much variety out there as there are cars in your local mall parking lot.

Check out all the maintenance parts available on NAPA Online or trust one of our 17,000 NAPA AutoCare locations for routine maintenance and repairs. For more information on demolition derby cars, chat with a knowledgeable expert at your local NAPA AUTO PARTS store.

One thought on “Demolition Derby Cars: A History Of Chaos” Leave a comment ›