There are many ways to compare vehicles, such as power or efficiency. For over 100 years, fuel economy measurement has been in terms of miles per gallon — the distance you can travel using one gallon of fuel. When comparing two vehicles, it’s easy to see that a 30-mpg vehicle will use more fuel than a 45-mpg vehicle. You can even use mpg to determine how well you’re driving or how well your engine is running by simply dividing your mileage by how much fuel you use.

What Exactly Is MPGe? 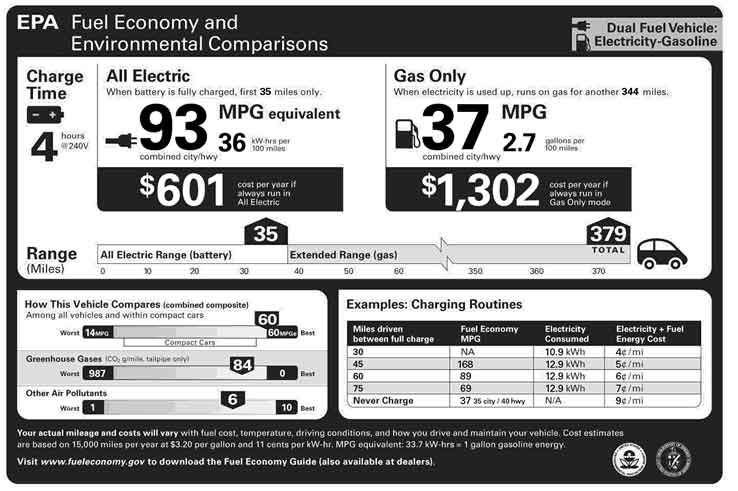 Comparing the energy usage of vehicles with dissimilar fuel sources is a challenge. To address it in 2010, the Environmental Protection Agency came up with a way to compare different fuels based on their energy content — miles per gallon equivalent. Two new vehicles were on the market, the Nissan LEAF and the Chevrolet Volt, which didn’t fall into the normal window sticker calculation for miles per gallon.

How To Calculate MPGe

So how is MPGe calculated? To calculate miles per gallon equivalent, you first need to know the gallon gasoline equivalent (GGE). GGE was created by the National Institute of Standards and Technology in 1994 originally to help figure out the fuel efficiency of natural gas powered cars. Knowing the GGE gives us a common denominator for comparison of MPGe to MPG.

Here are a few modern electric vehicles and their official MPGe ratings:

MPGe can vary based on vehicle design, weight, drivetrain efficiency, and other engineering factors just like a gasoline powered vehicle.

How Can You Use MPGe?

Now you know what MPGe is, but what can you use it for? It’s not like you can use it to compare how much it will cost to refuel or recharge, because these numbers don’t translate to anything useful. You can, however, compare the efficiency and environmental impact of different vehicles that use alternative fuel before making a purchase decision. In that way it is just as useful as comparing MPG numbers for gas or diesel powered vehicles when shopping for a new ride.

Whether you already own one or you’re looking into buying an alternative fuel vehicle, how much energy you really need to get from place to place might surprise you.

Check out all the fuel & emission system parts available on NAPAOnline or trust one of our 17,000 NAPA AutoCare locations for routine maintenance and repairs. For more information on alternative fuel vehicles and learning how is MPGe calculated, chat with a knowledgeable expert at your local NAPA Auto Parts store.