Chase Elliott earned his ninth top-five finish of the season, placing fifth in Sunday’s NASCAR Cup Series event at Richmond Raceway after starting 23rd. The 26-year-old driver steadily climbed through the field throughout the event, ending stage one in the 11th position and stage two in the eighth spot. Elliott continues to hold the Cup Series point standings lead by 116 markers with just two races remaining in the regular season.

Elliott rolled off the grid from the 23rd position for Sunday’s 400-lap event  and gained two spots before the first caution of the race on lap four. The early report from Elliott was that his No. 9 NAPA AUTO PARTS Chevrolet Camaro ZL1 turned better through the corner than expected. Restarting 21st on lap seven, he methodically worked his way forward and was up inside the top 15 by lap 36. His Chevrolet was strong on the long run, and Elliott used that to his advantage to improve his position to 11th before the end of the first stage on lap 70. 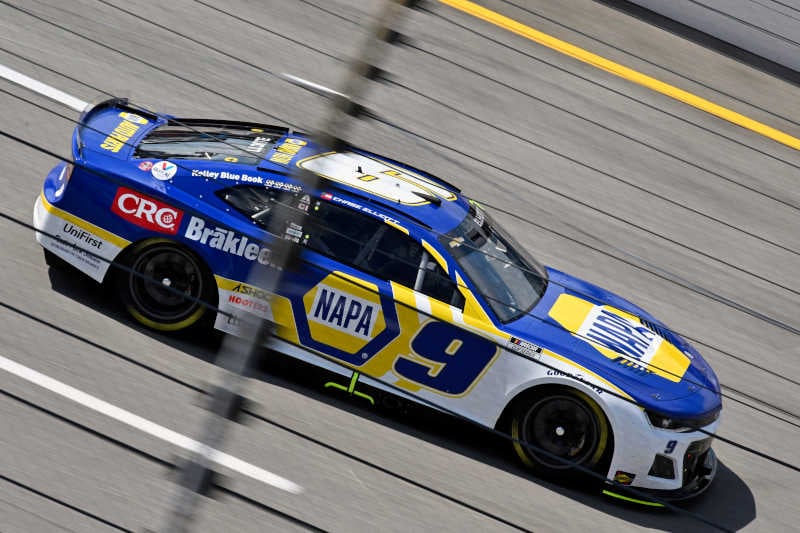 Under the stage-ending caution, the 2020 Cup Series champion reported that he felt like his right rear tire still had a little more life in it towards the end of the run compared to the cars around him. Crew chief Alan Gustafson made the call for four tires and fuel during the team’s pit stop and sent Elliott back out to start the second stage from the eighth position on lap 78. After losing some spots in the early laps, Elliott’s NAPA Chevrolet came to life, and he drove back up to eighth by lap 118. Shortly after, green-flag pit stops ensued, and Gustafson called Elliott in for four tires and fuel. Once stops cycled through, he was scored in the ninth position and advanced two more positions before it was time for another round of pit stops under the green flag. After another four-tire stop, Elliott worked his way up to eighth ahead of the conclusion of the caution-free second stage on lap 230. 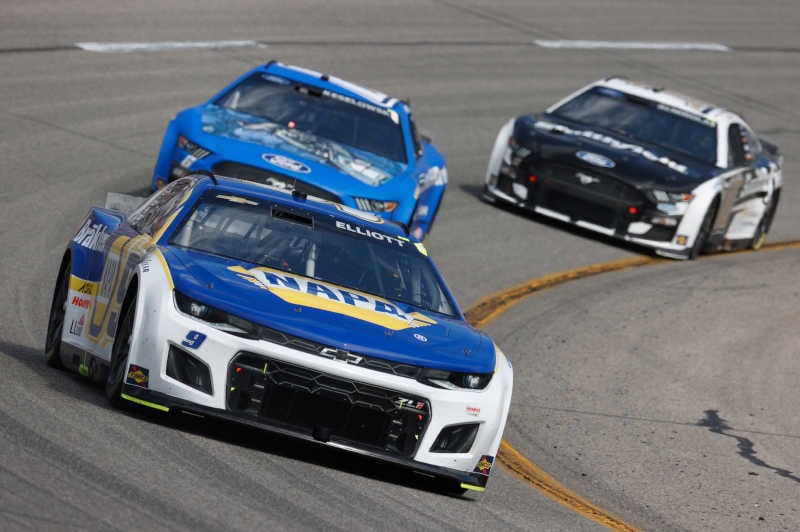 Elliott brought his NAPA machine to pit road during the stage break for four fresh tires and fuel before taking the green flag for the final stage on lap 239 in ninth. Before the field could complete a lap, the caution flag waved for a multi-car incident. Staying out, Elliott restarted in the same position and was still running ninth when the yellow flag waved again on lap 251. The Dawsonville, Georgia, native relayed to his team that he couldn’t feel the front tires anymore. Opting not to pit during the caution, Elliott lined up seventh for the lap 256 restart. After passing his teammate Kyle Larson for sixth on lap 277, he relayed to the No. 9 crew that his Chevrolet was on top of the track and felt very lazy, but he was making it work better than he had been. 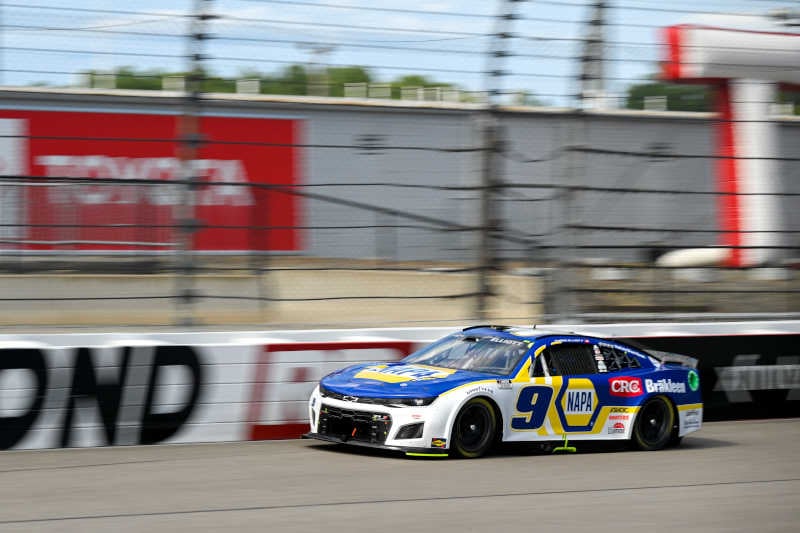 After a long green-flag run the pit window opened again, and Gustafson called Elliott in for another set of fresh tires and fuel at lap 294. Once pit stops cycled through, Elliott was scored in the fourth position. He remained there until the No. 11 of Denny Hamlin worked his way by on lap 327. With the race staying under green it was time for cars to head to pit road again around lap 340. The No. 9 team made a fast pit stop for four tires and fuel on lap 341, and Elliott was up to third once stops were complete. With the remainder of the race going caution-free, Elliott continued to race inside the top five and ultimately took the checkered flag in the fifth position. 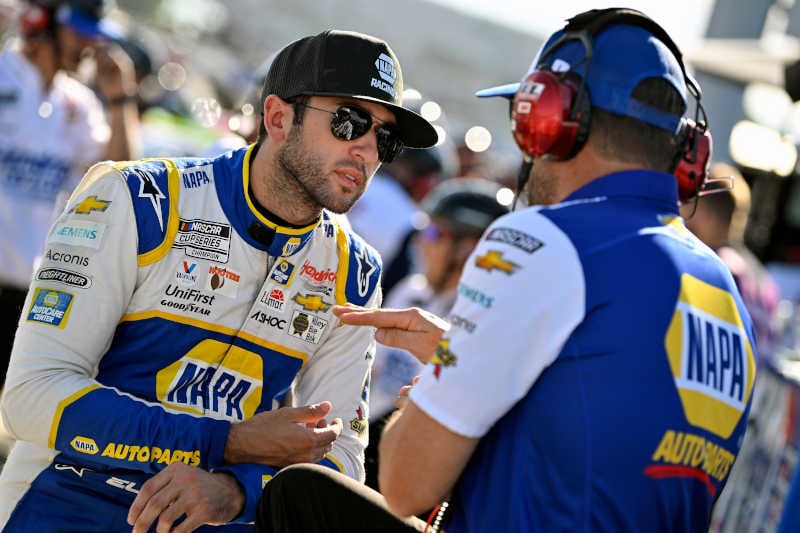 It was his fifth top-five finish at the Virginia short track. Elliott continues to lead the Cup Series point standings by 116 markers over Ryan Blaney with just two races remaining in the regular season. 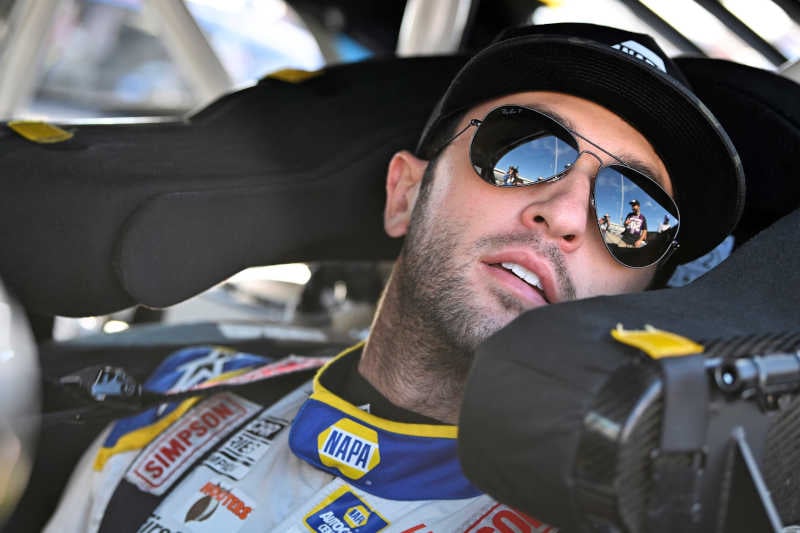 “The track was very similar there early and late, if anything, I feel like it got a little faster,” said Elliott. “It wasn’t a huge deal, just needed to be a little more forward there to have a shot. It was really odd, I didn’t think it was driving any better, but in comparison to people around us, we were going forward. So, just normal Richmond. Just more confusing I feel like. I have been here and had cars like that where you are not driving good, but you are moving forward. Then you will have days where you feel like your car is driving good and you are not going anywhere or vice versa. This place is really strange and the track had gained a lot of grip there at the end too. There were obviously a lot of different strategies going on, and it was nice to get a top five out of a tough day.”

Next Race: Sunday, August 21, Watkins Glen International
How to Watch or Listen: 3 p.m. ET on USA Network, MRN and SiriusXM