Chase Elliott started third in Sunday’s NASCAR Cup Series race at Homestead-Miami Speedway and earned valuable points after finishing inside the top 10 in each of the first two stages. The Dawsonville, Georgia, native ultimately took the checkered flag in the 14th position after an ill-timed caution in the middle of green-flag pit stops during the final stage changed the course of race. Elliott sits third in the Cup Series point standings with just one more race left before the Championship 4 is determined. The 2020 series champion sits 11 points above the cutline to advance. 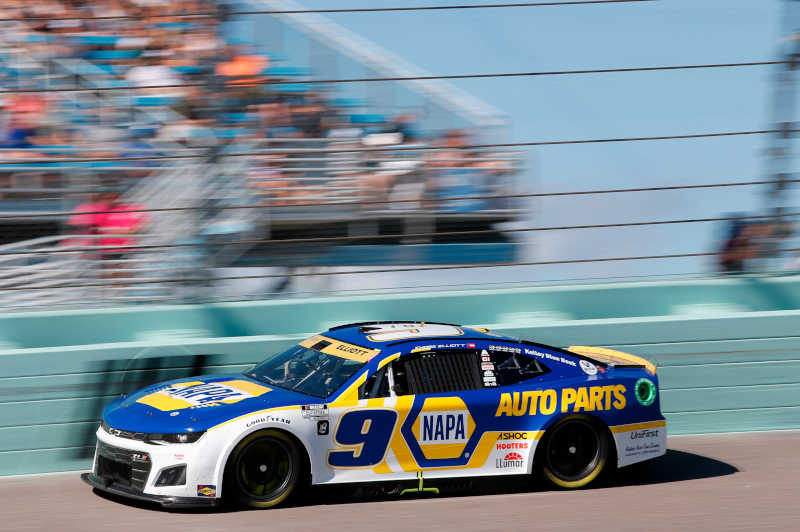 Elliott qualified third for Sunday’s  race. From the drop of the green flag, he raced inside the top 10 and was scored in the sixth position when the first caution of the race came out on lap 31. Crew chief Alan Gustafson called Elliott in for four tires, fuel and an air pressure adjustment. Gaining a spot on pit road, he lined up fifth for the restart in his No. 9 NAPA AUTO PARTS Chevrolet Camaro ZL1 on lap 35. He maneuvered his way to fourth before dropping back to fifth on lap 45. As the run went on, he continued to battle inside the top 10 and was scored eighth at the conclusion of stage one on lap 80. Elliott reported that his NAPA Chevrolet fired off decent but ended up loose as he got more laps on his tires. 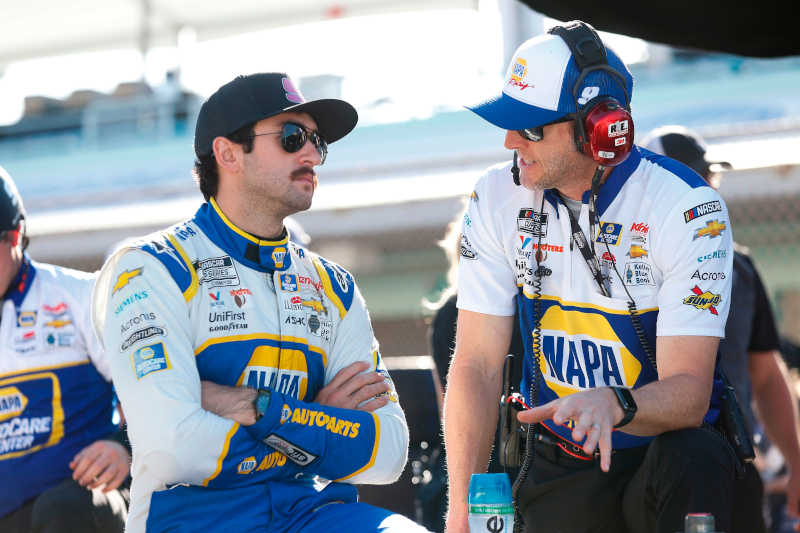 Gustafson made the call for four fresh tires and fuel during the team’s pit stop, and Elliott took the green flag for the second stage from sixth on lap 87. He improved his position to fourth by lap 90 before settling into the fifth position on lap 92. As a long run under green ensued, teams started making their scheduled pit stops around lap 120. Elliott brought his NAPA Chevrolet to the attention of his crew on lap 122 for four tires, fuel and a chassis adjustment. Once the field cycled through pit stops, Elliott was scored in the sixth position. He was running in that same spot when an incident brought out the caution with less than five laps to go in stage two. The stage ultimately ended under the caution flag and Elliott was scored with a sixth-place finish, adding to his stage points on the day. 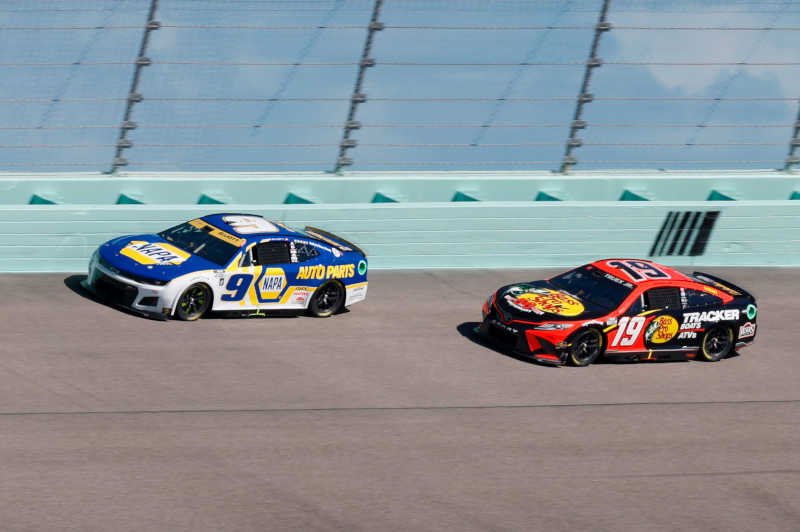 After a pit stop for four tires and fuel, Elliott started the final stage from the fifth position on lap 170. The 26-year-old driver lost a position on lap 172 but found his way back inside the top five on lap 180. Just two laps later, he made his way to fourth and remained there until it was time for another round of green-flag pit stops. Gustafson called Elliott to pit road on lap 209 for fresh tires, fuel and a chassis adjustment. Before the field could cycle through green-flag stops, an incident brought out another caution, trapping Elliott and several others a lap down. The 2022 regular-season champion took the wave around to get back on the lead lap and restarted from the 14th position on lap 216. He was in that same spot when another caution flag waved with just 23 laps to go. Under the yellow, the team took the opportunity to pit for four tires and fuel. A fast stop by the No. 9 team helped Elliott gain four spots on pit road. He lined up 10th for the restart with just 17 laps remaining and worked his way up to ninth before dropping outside of the top 10. He battled hard in the final laps, ultimately taking the checkered flag in the 14th position. 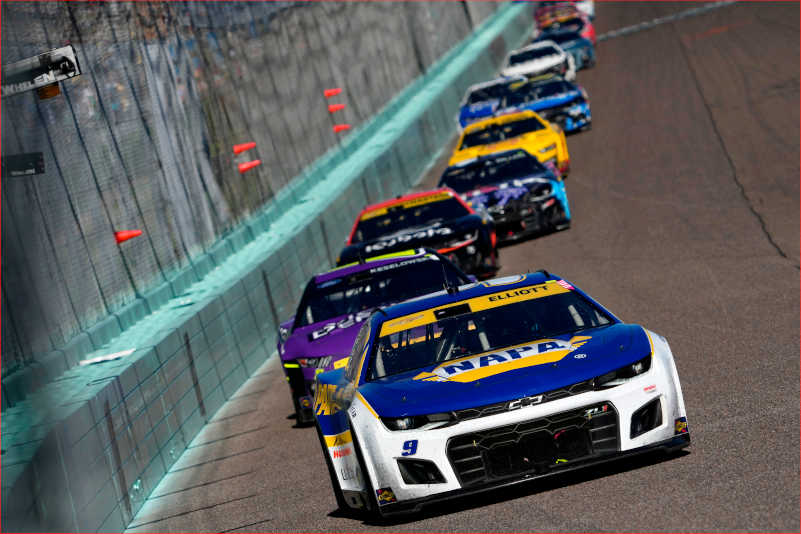 “We were playing defense all day, but we were doing a pretty good job of it and staying inside the top-five there, so that was great,” said Elliott. “But that’s what happens when you’re playing defense and you have something like that happen to you, you just get stuck. The other guys that got buried; they drove right back to the front. That’s just the difference.” 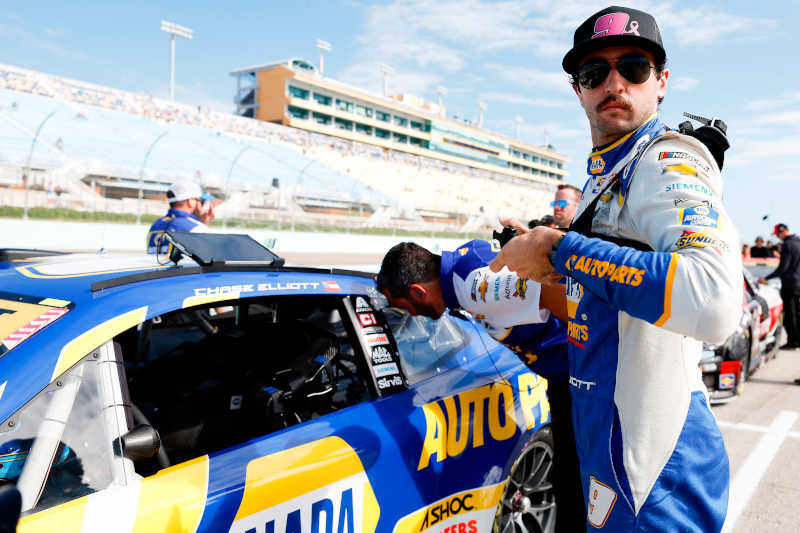 With valuable stage points earned, Elliott leaves Homestead-Miami third in the Cup Series playoff standings, 11 points above the cutline to advance to the Championship 4. Next week, the series heads to Martinsville Speedway for the penultimate race of the season.

Next Race: Sunday, October 30, Martinsville Speedway
How to Watch or Listen: 2:00 p.m. ET on NBC, MRN and SiriusXM