Chase Elliott led 27 laps and battled inside the top five for much of the night on his way to a runner-up finish in Sunday’s NASCAR Cup Series race at Homestead-Miami Speedway. The second-place result is Elliott’s sixth top-five finish of 2020 and moves him to second in the points standings after 12 races this season.

Elliott and the No. 9 Hooters team rolled off the grid fifth on Sunday. Elliott immediately jumped to fourth before lightning halted the race after only a handful of laps. After an extensive weather delay, the No. 9 driver took the ensuing restart from the fourth position on Lap 9 and found himself running sixth at the competition caution on Lap 21. During the caution, the Hooters team elected to visit pit road for four tires and fuel. A quick pit stop moved Elliott up to fifth for a Lap-25 restart.

On the restart, Elliott began picking off spots and grabbed the lead after only six laps. The 24-year-old driver remained on the point until NASCAR displayed the red flag once again because of lightning in the area.

As soon as the red flag was lifted, crew chief Alan Gustafson called Elliott to pit road for fresh tires, fuel, and a chassis adjustment. The 267-lap event resumed on Lap 36. Following the restart, Elliott’s Camaro slid loose while battling for the lead and he fell back to third. After sliding to fifth, he began searching for different lines to run around the slick South Florida oval. By the time Stage 1 concluded on Lap 80, Elliott regained a position to end the segment in fourth.

During the stage break, the No. 9 Hooters team had another quick pit stop that gained Elliott two positions and lined him up second for the restart on Lap 88. He lost a few spots in the opening laps of the stage and was scored sixth when he visited pit road for a scheduled green-flag pit stop on Lap 119. Elliott’s Hooters Chevrolet came to life in the latter half of the second segment as he rallied his way back up to third at the end of Stage 2. 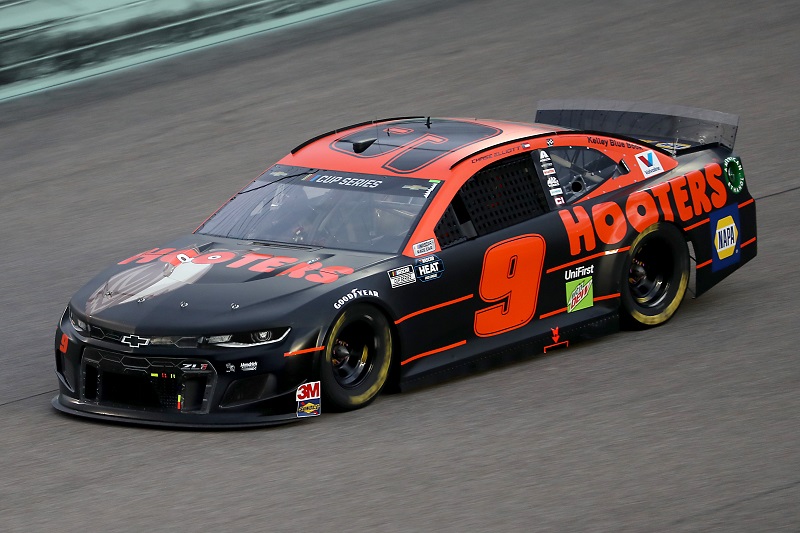 The Hooters team put Elliott on the front row to start the final stage after another brilliant pit stop. Back under green, Elliott reported the adjustments that Gustafson had made throughout the evening had improved the Hooters Chevy – particularly on short runs.

Elliott was running second and chasing down race leader Denny Hamlin before the final round of pit stops. The Hooters team made their final pit stop of the night on Lap 216 and put Elliott into the lead with less than 50 laps remaining. He held on to the top spot until lapped traffic allowed Hamlin to make the pass for the lead on Lap 239. Elliott stalked the No. 11 driver for the remainder of the race and ultimately finished second – a career best result at the 1.5-mile track.

With the finish, the No. 9 Hooters team moves to second in the NASCAR Cup Series standings through 12 races.