Chase Elliott and the No. 24 Hooters team battled from the back of the field to finish eighth in Sunday’s NASCAR Cup Series race at Texas Motor Speedway. Elliott remains in the NASCAR Playoff hunt as the Series heads to Phoenix International Raceway next weekend.

After starting 34th, Elliott wasted no time moving forward when the green flag waved. He worked his way up to 20th by Lap 10.  The 21-year-old driver continued to climb through the field during the first 85-lap stage. Elliott reported some handling issues early in the race, but crew chief Alan Gustafson and the Hooters team improved their No. 24 Chevrolet with adjustments during a Lap-54 pit stop. Elliott ended Stage 1 in 11th.

The Dawsonville, Georgia, native continued to work hard during Stage 2, starting in 10th and advancing to fifth-place by the time the green-checkered flag waved to conclude the stage. As a result, Elliott claimed an additional six stage points for the race.

The final stage of the 334-lap race proved to be the most challenging for Elliott and the No. 24 Hooters team. After starting in the top 10, Elliott dropped a few spots early while telling his crew that he had no grip in the right rear of the car.

By Lap 249, Elliott had advanced to eighth. For the remainder of the race, the driver of the No. 24 Chevy hit a plateau and was unable to gain any more positions on the field. Elliott ultimately finished eighth – the second-year driver’s 19th top-10 finish of the season. 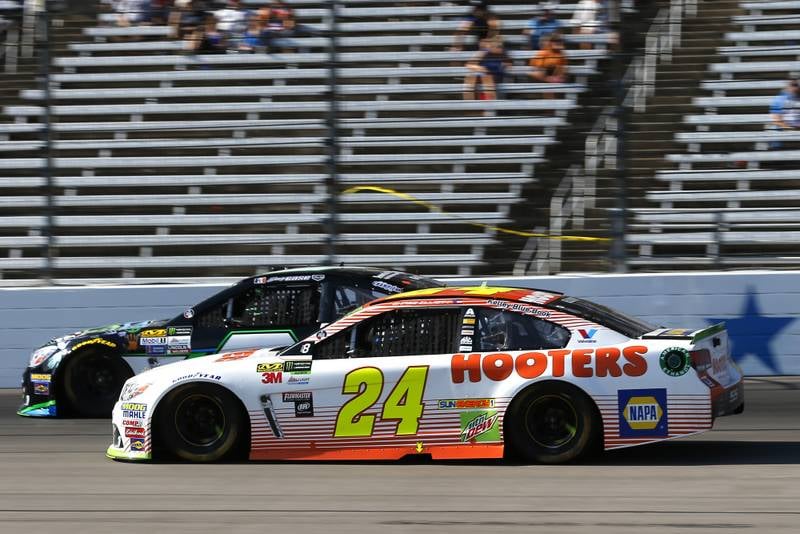 Elliott is currently seventh in the NASCAR Cup Series Playoff standings, 49 points behind fourth, as the series heads to Phoenix International Raceway for the Round of 8 cut-off race.