Chase Elliott, driver of the No. 9 NAPA AUTO PARTS Chevrolet Camaro ZL1, started Sunday’s NASCAR Cup Series race at Kansas Speedway from the 22nd position and battled up inside the top 10 for much of the day. The 2020 Cup Series champion earned valuable stage points during the race, finishing stage one in sixth and stage two in fifth before ultimately earning an 11th-place result. Elliott heads to Bristol Motor Speedway seventh in the playoff standings, 28 points above the cutoff line with just one race remaining in the Round of 16. 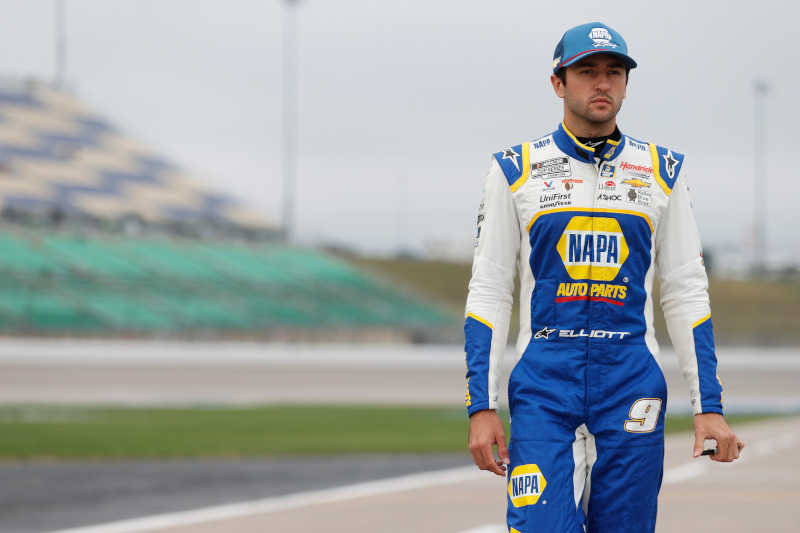 Elliott rolled off the grid from the 22nd position for Sunday’s NASCAR Cup Series race at Kansas Speedway. He lost some ground on the initial start but battled his way back up to 21st before the competition caution flag waved on lap 25. The 26-year-old driver had reported during the run that his No. 9 NAPA AUTO PARTS Chevrolet Camaro ZL1 was really tight center off, so the team opted for chassis adjustments along with four tires and fuel during the pit stop under the caution. Elliott restarted just inside the top 20 on lap 31 and was scored 14th when another quick caution came out. Restarting in that same spot on lap 38, he raced his way to 12th but dropped outside of the top 15 as the run went on. He was 16th when the yellow flag was displayed on lap 66. After relaying that his Chevrolet’s balance was still tight but was building free, Elliott came to pit road for four fresh tires and fuel. The team opted to make another chassis adjustment in addition to an air pressure adjustment during the pit stop. He restarted from the 15th position on lap 71 and his Chevrolet came to life when the green flag waved. He steadily gained ground, entering the top 10 on lap 73 and driving up to sixth to close out stage one. 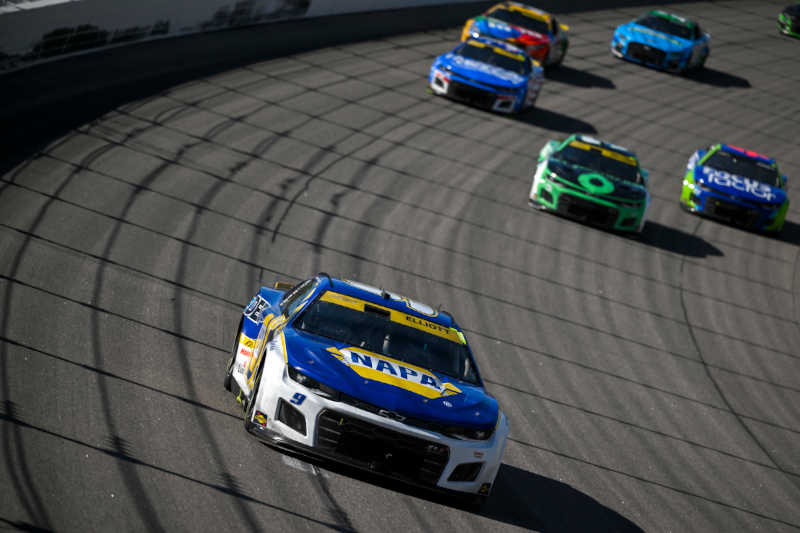 Crew chief Alan Gustafson called Elliott to pit road during the stage break for four tires and fuel. The Dawsonville, Georgia, native took the green flag for stage two from the third row on lap 86. He remained inside the top 10 and was scored in the sixth position when the caution flag came out on lap 91. Elliott restarted in fifth and dropped back to ninth, but methodically worked his way forward as the run went on. Running in seventh when another yellow flag was displayed on lap 110, Elliott reported to his team that it was the most consistent his NAPA Chevrolet had built. The team made a fast stop for four tires and fuel during the caution and Elliott chose the outside line for the restart, lining up in the sixth position. He advanced to fifth before the caution flag was displayed again on lap 115. Elliott restarted inside the top five and was running in fourth on lap 138 when an on-track incident brought out the caution. The 2020 Cup Series champion relayed to the team that it was the best his Chevrolet had been all day. The team opted to call Elliott to pit road for four scuffed tires and fuel. He restarted from the third row on lap 143 and battled his way to fourth before taking the green-and-white checkered flag to end stage two in the fifth position. 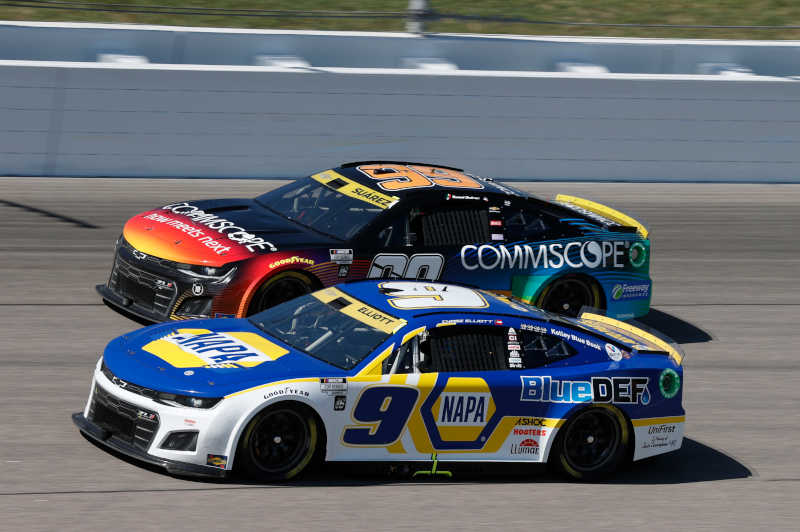 During the stage-ending caution, Elliott brought his NAPA Chevrolet to the attention of his crew for four tires and fuel. He lined up seventh to start the final stage on lap 171 but lost some ground on the initial laps. After falling to 13th, the Hendrick Motorsports driver advanced to 10th before green-flag pit stops ensued. Elliott headed to pit road with 53 laps to go for four tires and fuel. Once the field cycled through pit stops, Elliott was back up to the 10th position. The remainder of the race went caution-free and the driver of the No. 9 held strong in 10th before he was passed in the final laps, ultimately taking the checkered flag in the 11th position. 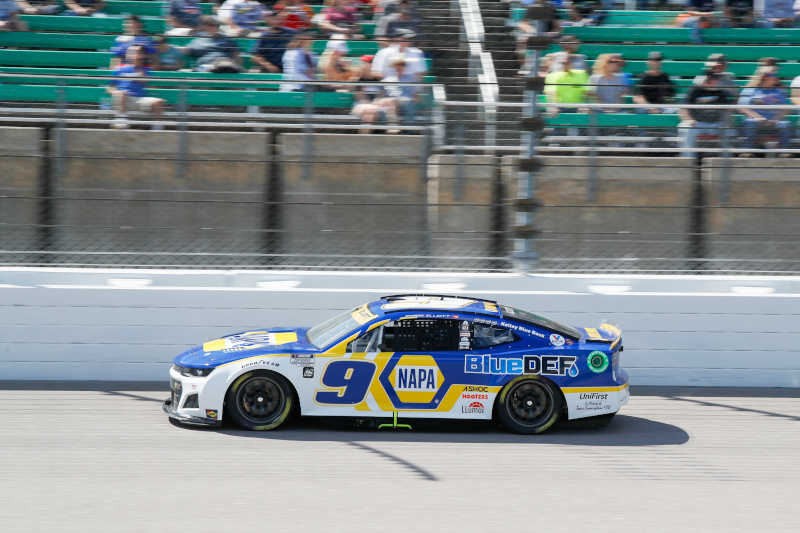 Elliott now sits seventh in the Cup Series playoff standings as the field heads to Bristol Motor Speedway next week. He’s 28 points above the cutoff line with just one race remaining before the playoff field gets narrowed down to 12. 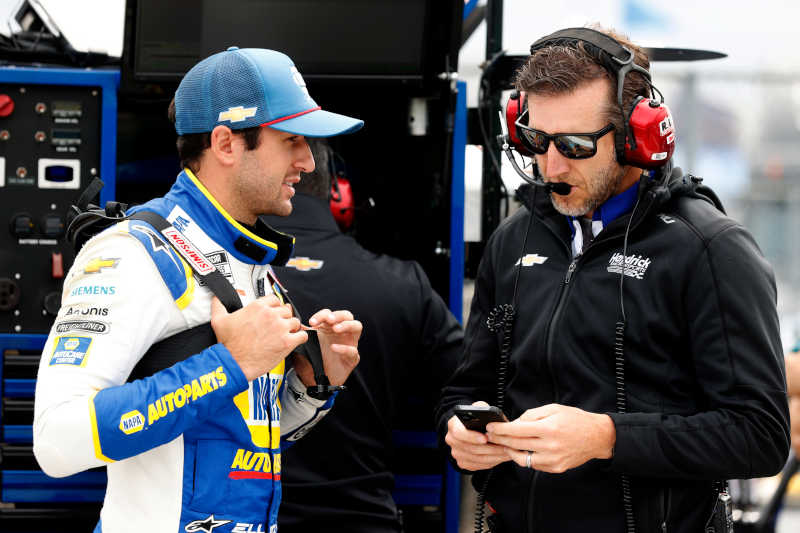 “Bubba (Wallace) was really good, congrats to him and his team,” said Elliott. “That’s a big win for him and a deserving one, too. We just had a bad restart there and fell back a lot of spots. Our car wasn’t really driving any differently than it was earlier in the race when we were up front. You just kind of lose momentum, start going the other direction and it’s difficult to rebound from that sometimes.”

Next Race: Saturday, September 17, Bristol Motor Speedway
How to Watch or Listen: 7:30 p.m. ET on USA Network, PRN and SiriusXM