Chase Elliott won his 18th career NASCAR Cup Series race on Sunday afternoon at Talladega Superspeedway. The Dawsonville, Georgia, native led a total of 10 laps on the day. He finished third in the first stage and won stage two before ultimately taking the lead again on the final lap to capture the victory. The win was the fifth of the season for the driver of the No. 9 NAPA AUTO PARTS Chevrolet Camaro ZL1 and it was his second series win on the high banks of Talladega. Elliott is now locked into the Round of 8 of the Cup Series playoffs, and he currently leads the point standings by two markers over Ryan Blaney. Next weekend, the series heads to the Charlotte Motor Speedway ROVAL, a track Elliott has won on twice before. 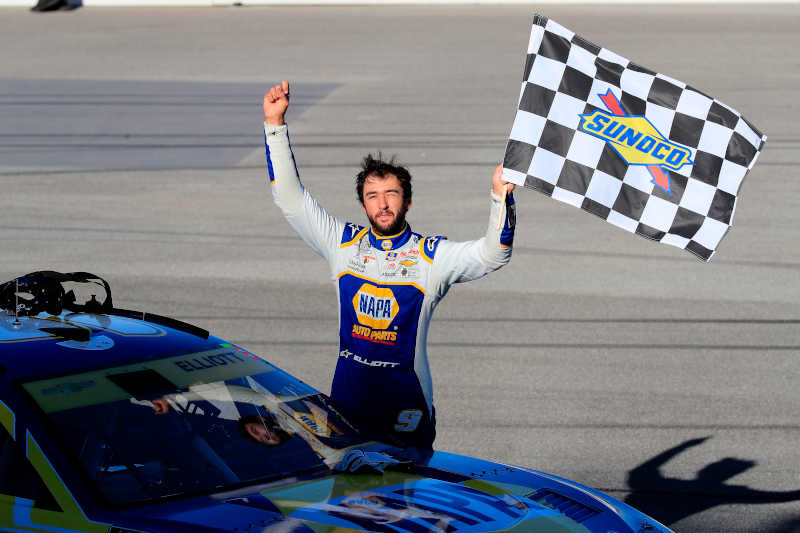 Elliott rolled off the grid from the 16th position and powered his way inside the top 10 by the end of the first lap. When the first caution of the day came out on lap nine, the NAPA driver was scored sixth and stayed out to restart fifth on lap 12. He remained on the bottom lane and was running in the fifth position when another caution came out on lap 25. Crew chief Alan Gustafson called Elliott to pit road under yellow for a fuel-only pit stop, and the driver of the No. 9 NAPA AUTO PARTS Chevrolet Camaro ZL1 restarted fourth on lap 30. Just one lap later, Elliott made a move to the bottom and drove to the lead for the first time of the race. He stayed out front for a few laps before the outside lane gained momentum; Elliott was shuffled back to sixth. He was scored in the same position when the race’s third caution flag waved on lap 46. The team opted not to pit during the caution, and the 26-year-old driver restarted sixth on lap 50. In the final laps of the stage Elliott maneuvered his way closer to the front, taking the green-and-white checkered flag to end stage one in third on lap 60. 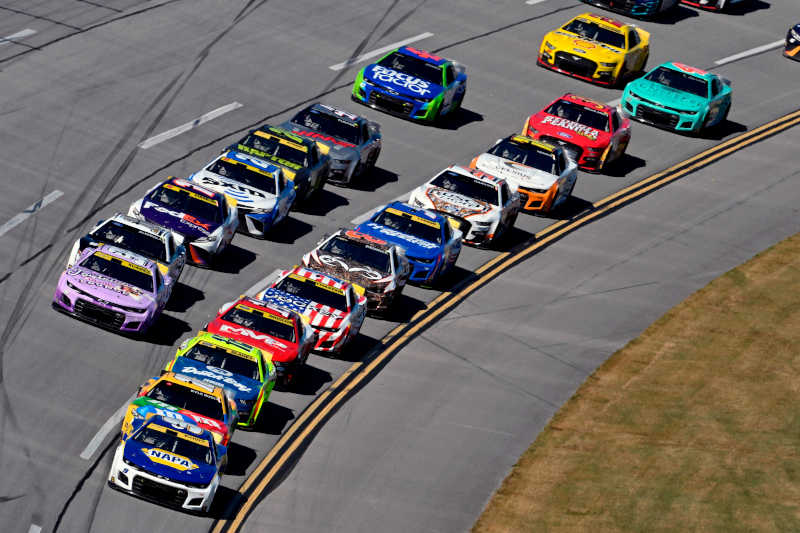 Under the stage-ending caution, Elliott brought his Chevrolet to pit road for four fresh tires and fuel. He lined up seventh to start the second stage on lap 66 and held strong in the bottom lane. He continued to race inside the top 15 and was up to eighth when he made a scheduled green-flag stop for fuel only on lap 100. Once the field completed their stops, Elliott was scored in the fourth position and remained inside the top five for much of waning laps of stage two, ultimately making a move that put him out front on the final lap to claim his sixth stage win of the season. 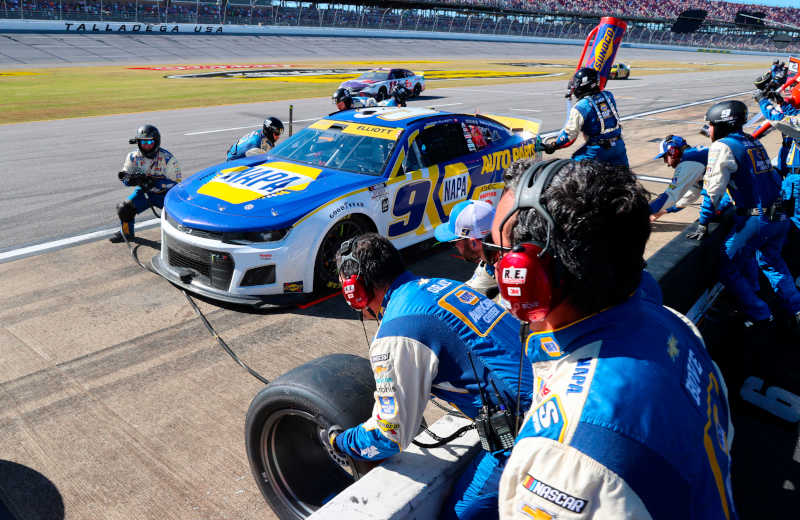 During the stage break, Elliott pitted for four tires and fuel and won the race off pit road, putting himself in control for the start of the final stage on lap 127. He held strong inside the top five until the momentum of the top lane surpassed that of the bottom, causing Elliott to lose some positions. As green flag stops were drawing near, Elliott was running in the 12th position with just 30 laps to go. Shortly after, the regular-season champion made his way to pit road for right-side tires and fuel. When the green-flag cycle of stops was complete, Elliott was scored in eighth. He remained inside the main pack and was in the fifth position when a caution came out with just six laps to go. Staying out on the track, Elliott lined up fifth for the restart with just two laps remaining. Elliott made a move to the outside lane after the restart and was in position to challenge Ryan Blaney for the lead on the final lap. Momentum was on Elliott’s side, and he was able to hold off his competitors to take the victory and lock himself into the Round of 8 of the Cup Series playoffs. 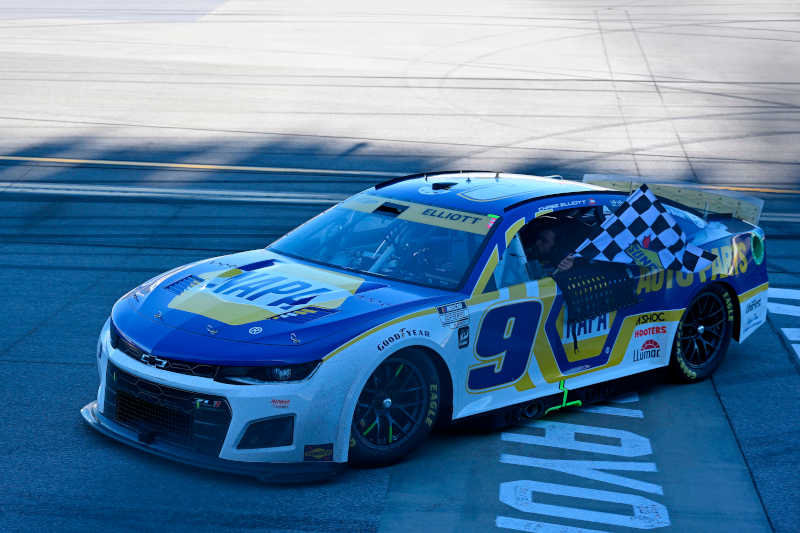 It was Elliott’s second Cup Series win at Talladega and his fifth victory of the season. He is the only playoff driver with a win in the 2022 postseason. Elliott heads to the Charlotte Motor Speedway ROVAL leading the points by two markers over Blaney. 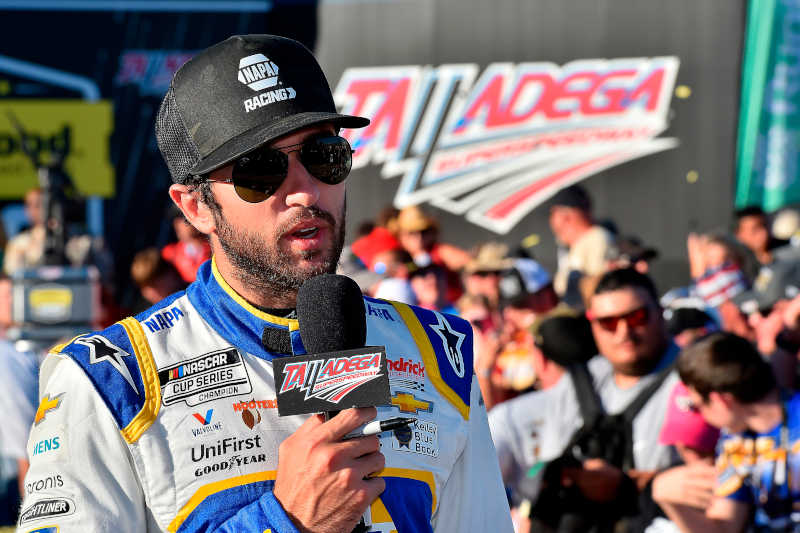 “It was a wild last couple laps,” said Elliott. “I wasn’t super crazy about being on the bottom. Fortunately, I got just clear enough off of two to slide up in front of Erik (Jones). He gave me some great shoves. Obviously, a Team Chevy partner there. Yeah, just had a good enough run to get out front, then I was able to stay far enough in front of Ryan (Blaney) here at the line to get it done. These things are so, so hard to win. You’ve got to enjoy them. Just appreciate everybody’s effort today. NAPA, Chevrolet, all of our partners that make this happen. Everybody at Hendrick Motorsports, the engine shop. The boss is here, so excited to celebrate with him. Get ready to go to the ROVAL and try to grab another one.”

Next Race: Sunday, October 9, Charlotte Motor Speedway ROVAL
How to Watch or Listen: 2 p.m. ET on NBC, PRN and SiriusXM