As the NASCAR Cup Series approaches the 2020 playoffs, Chase Elliott and the No. 9 NAPA AUTO PARTS team currently sit fourth in the point standings with two wins. Elliott notched eight top-five finishes plus 13 top-10s, and led 503 laps – all career highs for him at this point in the season.

NAPA AUTO PARTS driver Chase Elliott entered his fifth full-time season at stock car racing’s top level with momentum from a strong performance in 2019. The No. 9 team kicked off the 2020 season with a full head of steam in the first four races as the Hendrick Motorsports driver collected one pole award, two top-10 finishes and led 186 laps – more laps than any other driver during the three-race west coast swing at Las Vegas Motor Speedway, Auto Club Speedway, and Phoenix Raceway. 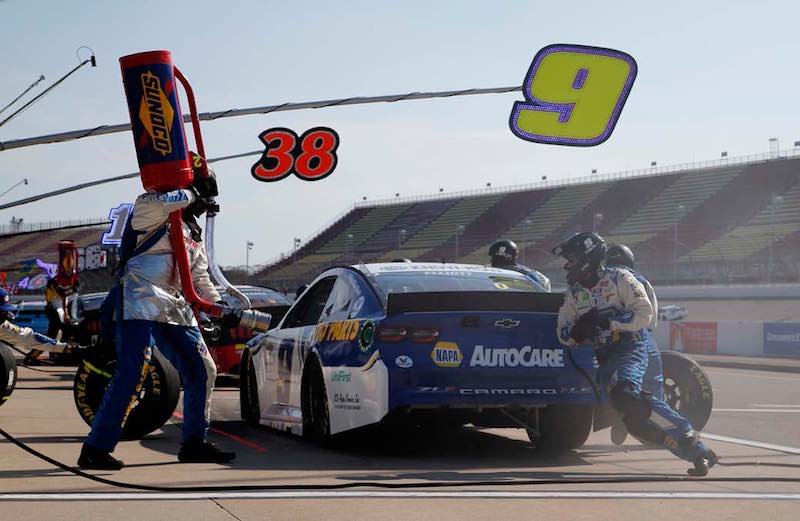 After the Phoenix race on March 8, the season was halted for two months because of COVID-19. During the downtime at home, Elliott made the most of the stint away from the track and spent as much time as possible outdoors – wake surfing on Lake Lanier and golfing with friends. The NAPA driver also passed the time by launching his Twitch channel (racechase9) to live stream himself playing video games and racing in the eNASCAR iRacing Pro Invitation Series.

In addition to iRacing, Elliott has streamed Call of Duty and Fortnite. As part of launching his Twitch channel, he participated in the Twitch Rivals SuperGames featuring a Fortnite tournament. Elliott and his four-man team competed against other professional athletes like NFL star JuJu Smith-Scuhster and Major League Baseball veteran Bryce Harper, and professional gamers from around the world. His team finished the tournament seventh and he donated his winnings to Children’s Healthcare of Atlanta.

In early May, NASCAR announced that racing would resume on May 17 at Darlington Raceway.

“NASCAR has never seen anything like what we are about to see this year,” Elliott said. “Showing up and just racing without any on-track time or any prep inside the car is super unorthodox and has never really even been considered until this. It is exciting to have something new and I’m excited that we are going to be back on TV and give our fans something to watch. I think the silver lining is that we are going to be able to offer something to our viewers on TV.”

The No. 9 NAPA team wasted no time making their presence known as Elliott was competing for wins at the first four races at Darlington Raceway and Charlotte Motor Speedway. In the fourth race back, Elliott led the final 28 laps of the NASCAR Cup Series race at Charlotte to earn his first win of the 2020 season.

“It feels awesome,” the NAPA driver said. “I really appreciate everybody at Hendrick Motorsports across the street, Chevrolet, and everybody at the shop. They have all been working really hard. NAPA, Kelley Blue Book, Hooters, Mountain Dew, all of our partners that have made this happen – I just appreciate it. I appreciate my team. Alan (Gustafson) made a great call there at the end to get it tuned up and, luckily, the run went long, and I think that fell in our favor.”

The Dawsonville, Georgia, native continued to battle for wins and lead laps each and every week. At one point, he led laps in eight consecutive races – the longest such streak of his career. As the series headed to Homestead-Miami Speedway in June, the NAPA driver raced inside the top five all night and led 27 laps before collecting a runner-up finish – a career best result at the 1.5-mile oval.

The NAPA AUTO PARTS team continued to chug along and picked up some momentum after dominating the NASCAR All-Star race at Bristol Motor Speedway where Elliott collected a $1 million bonus. Despite not being a points race, the victory helped change some bad luck the No. 9 team had been facing.

Coming off of three consecutive top-10 finishes, Elliott once again proved his road course prowess at the inaugural DAYTONA Road Course race on August 16 as he won the first stage and led a race-high 34 laps en route to his third consecutive road course victory. His three-race winning streak is the longest for any driver since NASCAR Hall of Famer Tony Stewart achieved the same feat in 2004-2005. Four-time NASCAR Cup Series champion Jeff Gordon holds the record for most consecutive road-course wins with six (1997-2000).

“I’m not sure I did anything very special today, but I had a really fast NAPA Camaro,” Elliott said in victory lane. “That makes everybody’s job a little easier from my end driving it, from Alan’s (Gustafson) end calling the race, and then from his end on adjusting, too. Really fortunate from that standpoint. We had a really nice week of preparation, came out and executed a really good race. Really proud of the day. I think we have a lot to be proud of and showing up having a car like it needed to be, it doing what I wanted, and then to take that and get the result that I felt like we deserved.”

With only three races remaining in the regular season, the NAPA AUTO PARTS team is hitting their stride at the most crucial part of the year. Elliott already secured his fifth consecutive playoff berth with his win at Charlotte and is currently ranked fourth in the driver point standings.

“It’s crazy that we are so close to starting the playoffs,” the 24-year-old said. “This season has gone by quick with racing twice on some weeks. I am excited for the playoffs and this final push; this is an important time of year. I want to be in a situation where me and the NAPA team are locked into Phoenix. That is the situation we strive for. Winning is the way to Phoenix and there is still time to do that.”