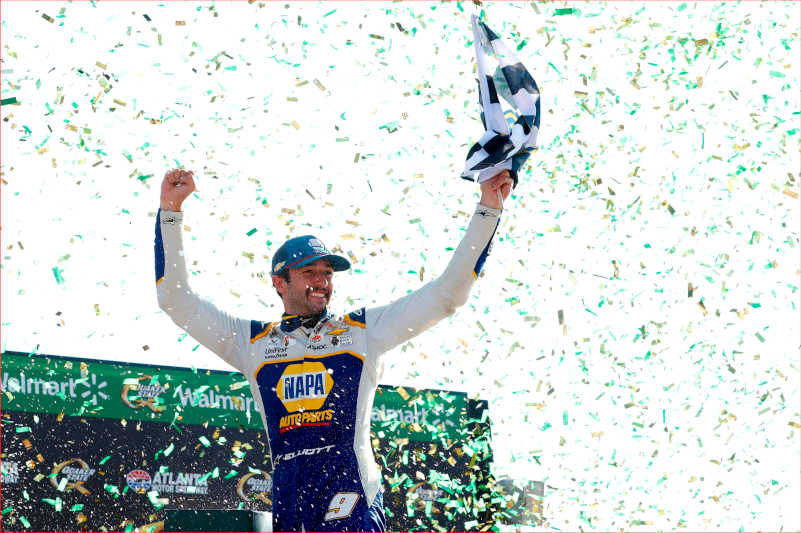 Elliott started Sunday’s race at his home track of Atlanta Motor Speedway from the pole position after qualifying was canceled due to rain. Elliott’s No. 9 NAPA AUTO PARTS Chevrolet Camaro ZL1 showed speed from the drop of the green flag as he battled for the lead from the start. After leading the second lap, he continued to race well inside the top 10 and maneuvered his way back to the lead before the competition caution came out on lap 25. Opting to stay out on the track, he restarted from the top spot on lap 31 and remained there until battling side by side with the No. 12 of Ryan Blaney. Elliott came out on top, capturing the stage one win at lap 60. 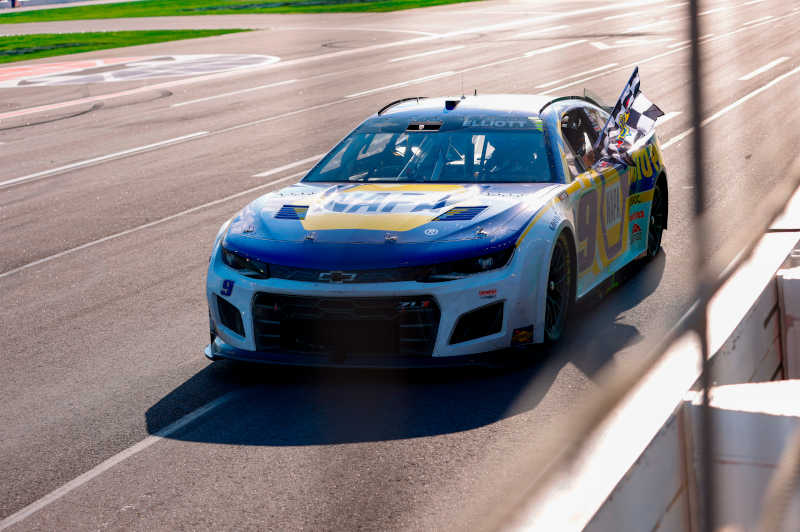 During the stage break, crew chief Alan Gustafson called the Dawsonville, Georgia, native in for four tires, fuel and an adjustment, sending him back out to start stage two from the third position on lap 67. He raced inside the top five in the opening laps of the stage and was scored in fifth when a caution flag waved on lap 78. Staying out, he restarted from the same position on lap 84 and found his way to the lead once again on lap 87, holding point until a caution came out just a few laps later. After pitting during the caution period for right side tires and fuel, Elliott lined up seventh for the choose cone and picked the bottom lane for the lap-99 restart. He continued to race inside the top 10 over the next portion of the stage, which saw multiple cautions. He lined up eighth with 18 laps remaining in stage two and powered his way to the lead with just six laps left. He stayed out front until a caution flag waved just prior to end of the stage. Elliott was scored the leader at the time of the caution and completed the sweep, taking the win in the second stage on lap 160. 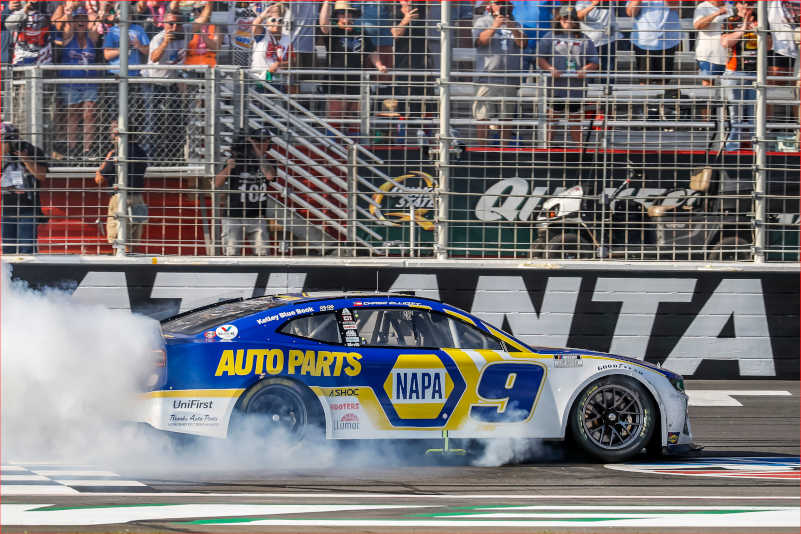 Under the stage-ending caution, the team took the opportunity to pit for four fresh tires and fuel. Elliott was ninth after the pit stop and worked his way to sixth in the opening laps of the final stage before the race was slowed for a caution with 90 laps to go. The driver of the No. 9 relayed that it was the best his Chevrolet had fired off. Opting not to pit, he used the choose cone to line up on the second row for the restart and worked his way to second just prior to another caution with 70 laps remaining. Elliott brought his Chevrolet to the attention of his crew for right side tires and fuel. He took the green flag from the front row with 66 laps to go and battled side by side for the lead. Eventually, Elliott took command of the top spot and remained out front until a caution flag waved with 24 laps to go. Choosing to stay out, Elliott led the field to the green alongside the No. 19 of Martin Truex Jr. for the restart with 19 laps remaining. The two were door to door, but Truex took over the lead before another caution with just under 15 laps left. 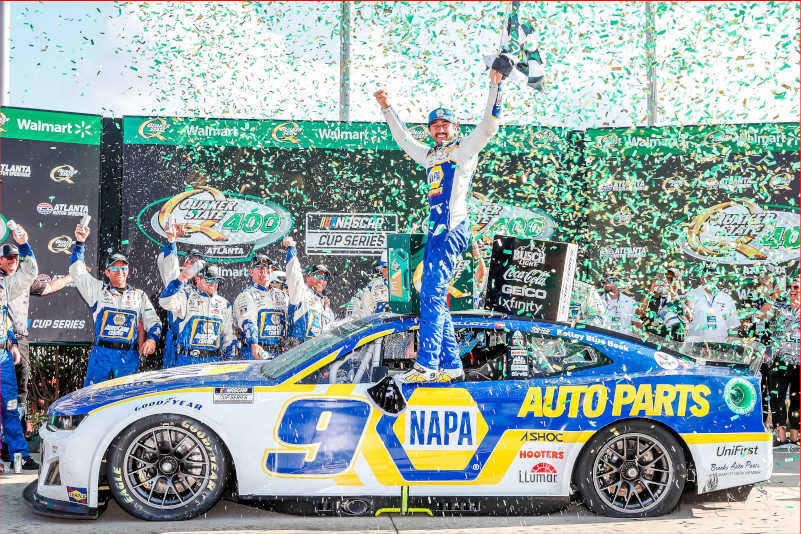 Staying out once again, Elliott lined up on the second row for the restart with eight laps to go. It didn’t take long for another on-track incident to bring out the caution as the race was slowed after just one lap back under green. Elliott was scored in third and made impressive moves once the race resumed to take the lead with two to go. On the final lap another incident brought out the caution and the Georgia driver took the checkered to earn the win at his home track. 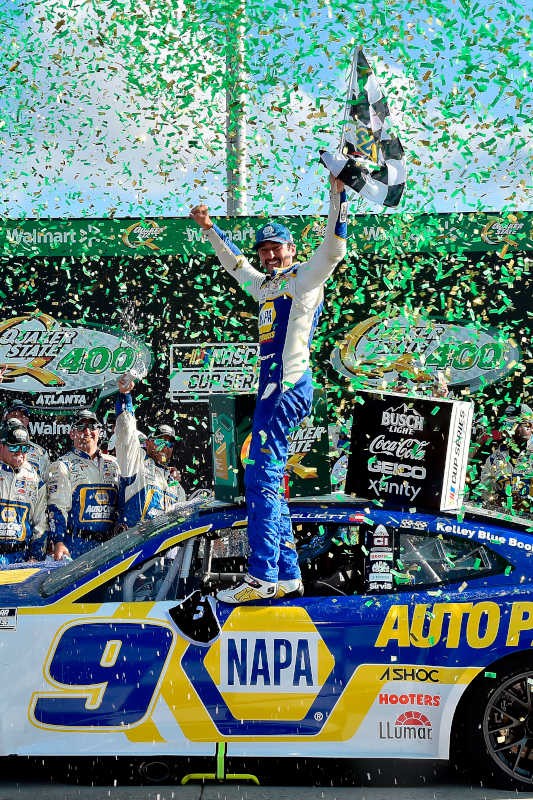 The victory was Elliott’s third of the season and the 16th of his Cup Series career. He became just the second driver from the Peach State to earn a win at Atlanta, joining his father, Bill Elliott. With his win, Elliott stretched his point standings lead to 47 over Blaney. He also continues to lead the projected playoff standings. 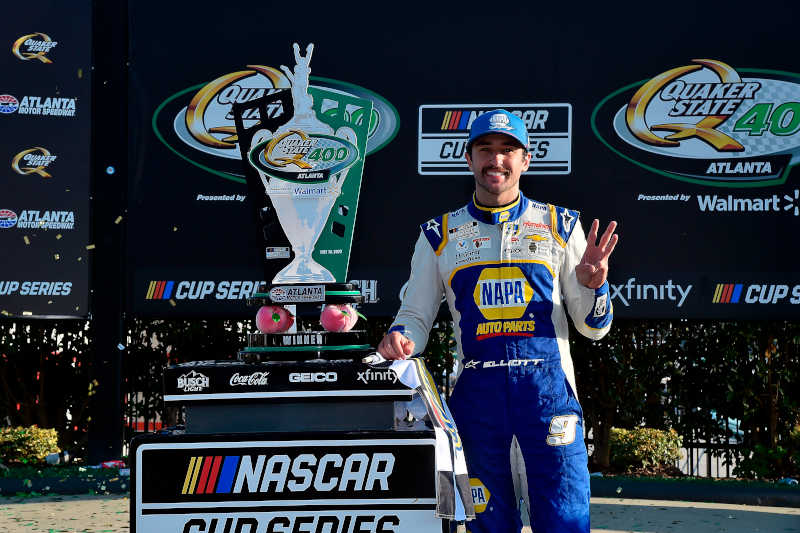 “This one is up there for sure,” said Elliott. “To win at your home track is a really big deal. I think to any race car driver. I’ve watched a lot of guys do it over the years; Jimmie (Johnson) out in California. We haven’t really had a very good run here, so I felt like today was a great opportunity for us. This is obviously home for me. Home to a lot of great fans who made a lot of noise today. Home for NAPA right down the road in Atlanta. Couldn’t be more proud of our team. What a car. I’m not sure we’ve ever had a speedway car that good. I feel like I gave one away last week, and to come back and to put on a performance like that, I’m really proud of that.”

Next Race: Sunday, July 17, New Hampshire Motor Speedway
How to Watch or Listen: 3 p.m. ET on USA, PRN and SiriusXM