Chase Elliott and the No. 9 NAPA AUTO PARTS team turned in a stellar performance Sunday at Martinsville Speedway to earn their fourth win of the season and advance to the Championship 4 race next weekend in Phoenix. 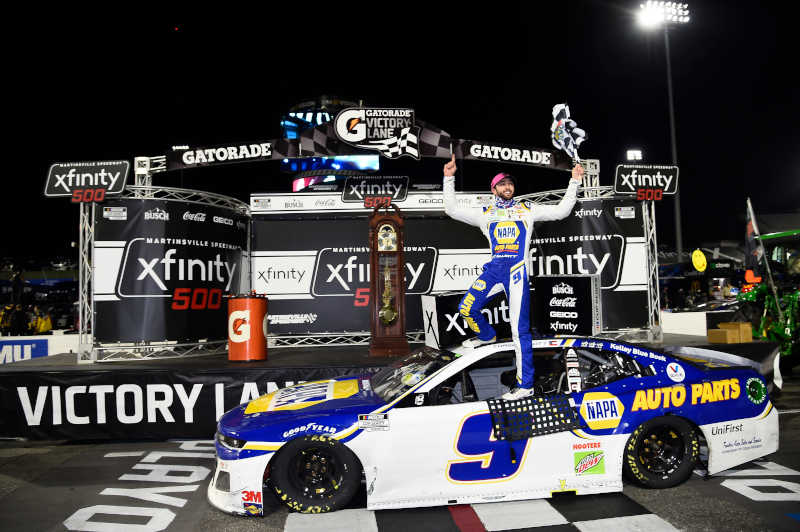 Elliott and the NAPA AUTO PARTS team rolled off the grid eighth for the season’s penultimate race. Elliott showed speed early as he moved all the way up to second and was closing on the race leader prior to the competition caution on Lap 61. During the caution period, he pitted for four fresh tires and fuel and lined up second for the ensuing restart on Lap 68. The NAPA Chevy continued to run second until he eventually grabbed the lead for the first time on Lap 90. When a caution came out on Lap 104, Elliott reported that he was happy with the handling of his NAPA Chevy as the No. 9 team opted not to pit while many other lead cars behind him did visit pit road. The cars on fresher tires quickly pounced on Elliott on the restart, but he managed to hang on to finish fourth at the end of Stage 1. 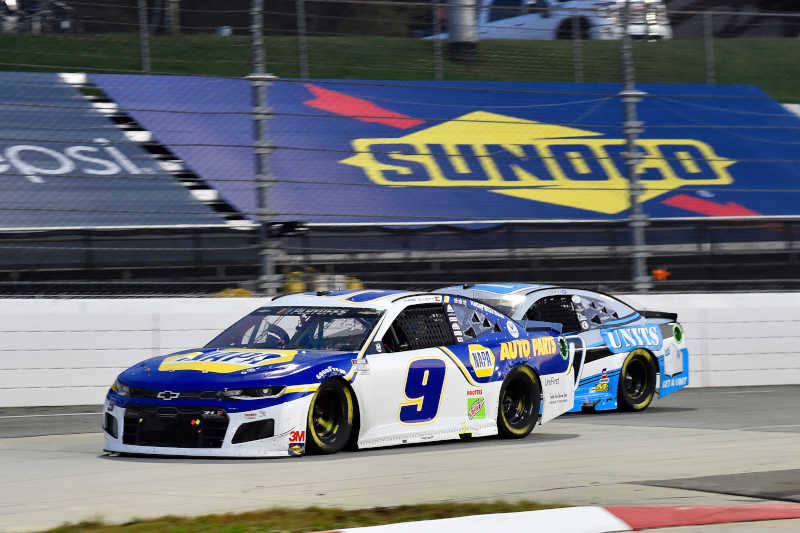 Between stages, a quick pit stop by the NAPA crew propelled Elliott from fourth to first in the race off pit road. After several cars did not pit between stages, the No. 9 Camaro lined up sixth when the race resumed on Lap 140. He quickly moved up to third before another caution slowed the race on Lap 146. Elliott used the choose rule to restart from the outside of the front row on Lap 159. Not long after the restart, the NAPA Chevy reclaimed the lead on Lap 163. He remained out front until the yellow flag waved on Lap 215. Unlike the Stage 1 pit situation, Elliott pitted for four fresh tires and fuel while most other leaders did not. That strategy put the NAPA driver 14th with 40 laps remaining in the segment. He wasted no time charging back to the front and retook the lead on Lap 241. Elliott led the final 20 laps of Stage 2 to pick up his tenth stage win of the season.

Elliott’s dominance continued in the final stage as he led until a caution on Lap 351 brought everyone to pit road. A slight hiccup during the No. 9 team’s pit stop dropped Elliott to fifth for the ensuing restart on Lap 359. The Dawsonville, Georgia, native was back up to fourth before the caution flag waved again on Lap 400 to bring all of the leaders to pit road once again. A miscue on pit road dropped Elliott to ninth for a restart with 91 laps remaining. 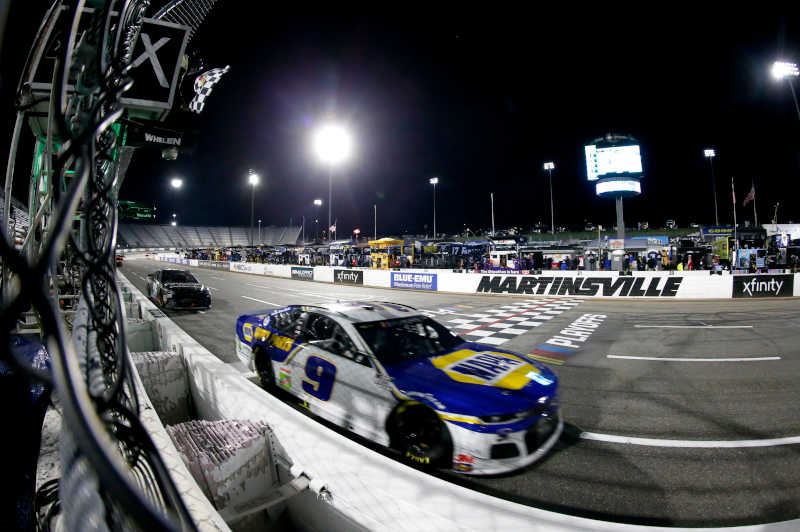 The setback served as another opportunity for Elliott to showcase his dominance as he surged back into the top five on Lap 421. When another caution slowed the race on Lap 440, the No. 9 Camaro was scored third. This time, the NAPA team executed a flawless pit stop and put Elliott third for a restart with 51 laps remaining. Following the restart, Elliott made a brilliant three-wide pass to the inside to move up to second and returned to the lead on Lap 456. Once he was back in the lead, he stretched his advantage to more than five seconds over second place by the time the checkered flag waved. 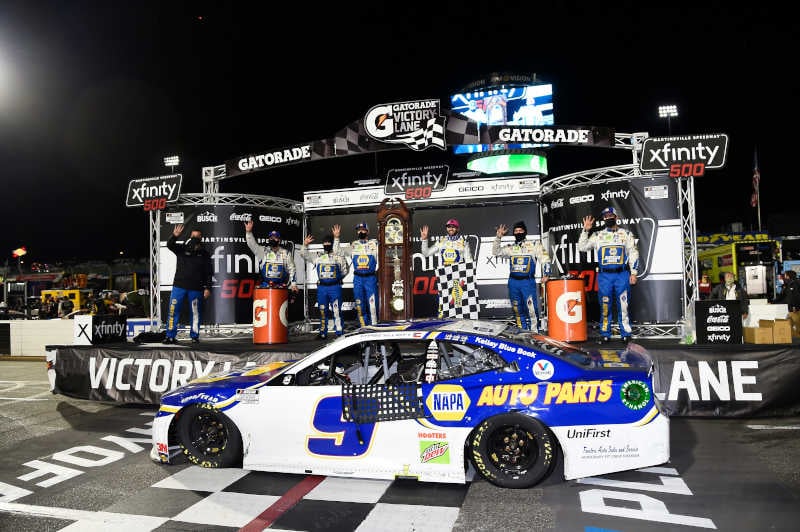 “Oh, my gosh. This is the biggest win ever for us,” said Elliott. “I’m just so proud to be able to be backed into a corner like that and have to win tonight. I feel like that’s what we’ve been missing these past four or five years and perform when we don’t have a choice. And, to do that tonight; we couldn’t ask for a better night. This is unreal. Thanks to the fans for coming out. They’re here and I love to see it! I’ve just got to catch my breath. This is just unbelievable. We’re going to Phoenix with a shot to win a championship and have a beautiful blue NAPA Camaro headed out there with a shot to win a title. What more could you ask for?” 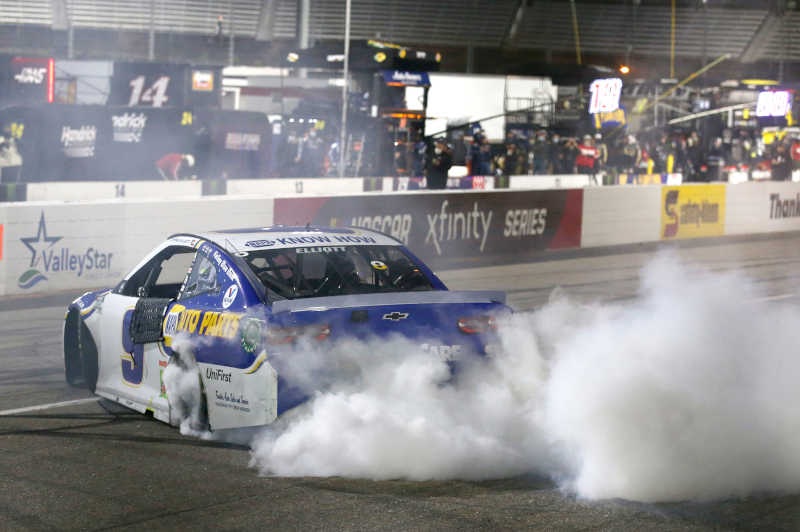 With the win, Elliott clinched his first career berth in the Championship 4 race next Sunday at Phoenix Raceway. The victory is the fourth of the season for the No. 9 team and the tenth of Elliott’s NASCAR Cup Series career.