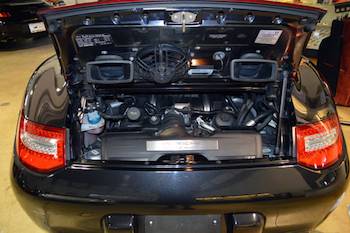 While most cars on the road today have the engine up front under the hood, some achieve higher levels of performance and handling through different engine placement.

Front-, mid- and rear-engine vehicles have been around for quite some time. The more exotic engine placements are usually reserved for racing and sports cars, but there are everyday examples. What makes one different from the others? Let’s take a look.

A front-engine car is the one you’re probably the most familiar with. The engine is located under the front hood of the vehicle, directly on top of or slightly forward of the front wheels. The reason that most cars have the engine located here is because they’re front-wheel drive (FWD), and placing the engine directly on top of the wheels maximizes traction under normal driving conditions.

From behind the wheel, a front-engine car is the easiest to drive. It has the most mild driving characteristics with a slight to moderate amount of understeer, due to the weight of the car moving toward the rear as it accelerates. Rear-wheel-drive (RWD) front-engine vehicles tend to handle better while cornering, because the weight is more evenly distributed. However, they suffer in slippery conditions, because there isn’t as much weight on top of the driving wheels.

A mid-engine car is one where the engine is toward the rear of the car but forward of the rear wheels — essentially placing it right behind the seats. Doing this moves the weight of the engine, the heaviest part of any vehicle, in between the front and rear wheels, yielding nearly perfect 50/50 weight distribution.

Because of their superior balance, mid-engine vehicles are nimble and corner easily while still having a fair amount of traction under acceleration. This layout is found in sports cars more often than not. Due to the engine being immediately behind the seats, however, these cars rarely have more than two seats, and leg room is limited at that. Also, because the weight is so evenly balanced, a mid-engine car is harder to control when it spins out, as neither the front nor the rear wheels have more weight on them.

Rear-engine cars are certainly more uncommon than mids. In this configuration, the engine is mounted beyond the rear wheels and essentially hangs off the back of the car. The idea behind this design is to allow the car to get the handling benefits of rear-wheel drive with a similar weight distribution under acceleration as a FWD vehicle. With the weight balance moved back over the rear wheels, the car can accelerate faster. These vehicles also have more traction, because the weight is so far toward the back. Rear-engine vehicles are prone to oversteering, however, and are the most difficult to drive of the three.

Odds are that every car you’re considering buying will have a front-engine configuration. However, there are alternative options out there if you’re looking for something a little more exciting. Overall, front engines give you the easiest (and most common) setup that’s easy to drive; mid engines are more agile, but you have to sacrifice leg room; and rear engines are more uncommon, but can do the most at the cost of a steeper learning curve.

Check out all the engine parts available on NAPA Online or trust one of our 17,000 NAPA AutoCare locations for routine maintenance and repairs. For more information on engine placement, chat with a knowledgeable expert at your local NAPA AUTO PARTS store.