Vehicle electrical problems mean you’re not going anywhere. Most such issues often have something to do with the car battery, although the alternator, starter, fuses and wires may also cause problems. Other possible culprits are the battery terminal ends, which are tasked with connecting the battery cables to the battery. Here’s a look at some symptoms that may indicate failing battery terminal ends and how to replace them. 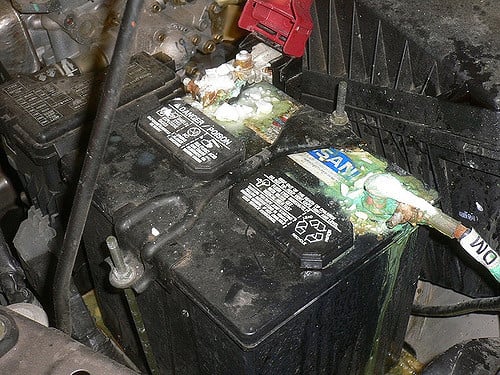 You turn the ignition switch and get nothing. Or, you hear a clicking noise — a sign that the battery is unable to supply enough energy to turn the engine. The engine may eventually start, but does so sluggishly. As long as the outside temperature isn’t very low, you can rule out extreme cold as a factor.

Another sign that points to electrical problems is if the headlights aren’t shining brightly. Also, other electric-dependent components such as the audio or navigation systems may load slowly or not work at all.

If you notice any of the symptoms above, then it’s time to locate the battery and investigate. Your vehicle’s battery is probably under the hood, but it could be in the trunk or underneath the rear seat.

Immediately focus on where the battery terminal ends meet the battery posts. Most ends have covers, but not all. Lift the covers; if you notice corrosion, that could be a contributing factor to difficulty starting the vehicle, weak lights or other electrical issues.

Disconnect the car battery by loosening the clamps that hold the ends in place. Begin with the negative clamp followed by the positive clamp. Avoid touching other metal parts while disconnecting the ends to prevent shorting out the battery.

If the battery terminal ends are broken or appear worn, you’ll need to replace them. Once you’ve removed them, clean the battery posts, as needed.

To replace the ends, use a wire cutter to separate the ends of the cables. Make each cut as close to the connecting point as possible. Next, with a utility knife in hand, strip away approximately 1 inch of cable insulation to expose the wires. If the wires have corrosion on the ends, use a utility knife or sandpaper to remove detritus, then wipe them clean with a rag.

You’re now ready to replace the current ends with new ones. Stick the cable into the new terminal end until it can go no further. Tighten both nuts securely, then with one hand firmly holding onto a terminal end, tug on the cable with your other hand to ensure that the connection is tight. Repeat this step with the other connector and cable.

Another option is to replace the entire battery cable. This may be necessary if the cable insulation has been damaged, or if cutting the ends off the cable leaves the cable too short to reach the battery terminals.

If the battery terminals have corrosion, you can clean them by applying a solution of baking soda and water to each post. Rinse with water, then wipe dry with a rag. Next, smear petroleum jelly on each terminal to protect the battery from corrosion.

To connect the terminal ends, seat the positive terminal followed by the negative terminal. Then, secure them by tightening each bolt. Finally, snap each cover over the respective end.

Your job is truly done if the previous signs and symptoms have disappeared. You can confirm this by starting the engine, turning on the lights and adjusting the navigation or audio system. If you still see signs of electrical problems, it’s time to consult your local mechanic.

Check out all of the batteries available on NAPA Online or trust one of our 17,000 NAPA AutoCare locations for routine maintenance and repairs. For more information on the signs and symptoms of failing battery terminal ends, chat with a knowledgeable expert at your local NAPA AUTO PARTS store.