True to its name, Hard Luck Auto Automotive Services near Oklahoma City serves those who are having a rough time and are just one car repair bill away from catastrophe. The nonprofit’s model is to repair vehicles at no cost when the client buys the parts.

Unfortunately, in early August, the nonprofit’s founder and military veteran Adam Ely had a bit of hard luck himself when thieves broke into his the shop and stole a laptop and thousands of dollars in tools and equipment. “I don’t think we will see those tools ever again; they’re long gone,” Ely said in a media interview following the burglary. “I don’t hold a grudge.”

In response to the theft he simply encouraged people to make a donation or purchase a Hard Luck Auto t-shirt online to make up for what was stolen. “We rely on the generosity of others,” he said. “We’re just looking forward to the future.”

Soon Ely’s bad luck turned into good luck as word about the break-in spread on social media and was picked up by a local television station. All the attention resulted in an outpouring of community support. 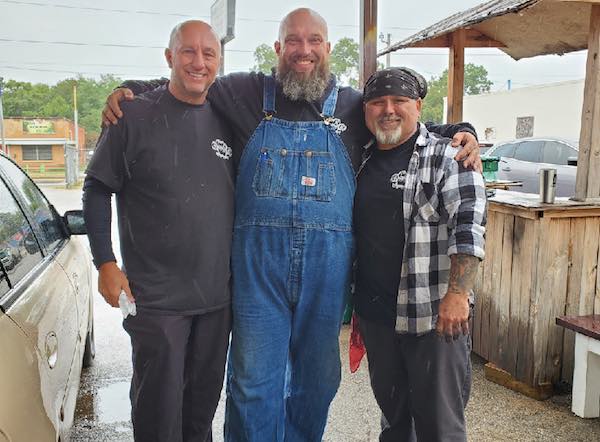 NAPA and suppliers including Milwaukee and DeWalt were among those that stepped up to provide a long list of tools and equipment including a diagnostic scan tool. Additionally, in a Facebook post Ely said the local NAPA AUTO PARTS store donated “an insane amount of oil, brake fluid, and coolant.”

In addition to tools, equipment, and products NAPA donated a large pop-up tent. When there isn’t enough room in the bays, Ely and his team now work on a vehicle in the shade of the tent.

NAPA District Manager Randy VanHorn said, “In addition to NAPA’s donations, there are a lot of people in the Oklahoma City area who are helping. After hearing the news local residents have even been stopping by the shop to donate cash. It’s really cool to see.” 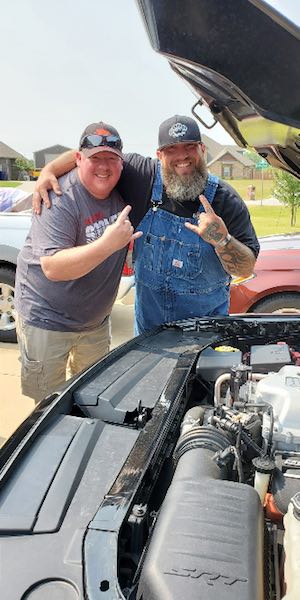 VanHorn said he originally learned about Hard Luck Auto through a counterpart in Denver. One of NAPA’s customers and a veteran of the Gulf War, Phil Wilson of Wilson’s Extreme Sports, in Aurora, Colorado, heard about Ely and Hard Luck Auto through social media. On Facebook Wilson saw Ely doing his repair work from the ground. So, he worked with NAPA Denver to donate a lift to Hard Luck Auto in Oklahoma City.

“That’s how my relationship with NAPA started,” said Ely. “NAPA corporate as well as the NAPA AUTO PARTS store here got involved. Previously, I relied on my 10% military discount but now, once I diagnose the problem with the client’s car, I look up the part I need to fix it on PROLink, and fill out what I call a Hard Luck coupon. No money changes hands here at Hard Luck Auto.

“The client just takes that coupon to the local NAPA store where they can buy the part at a discount NAPA has set up specifically for Hard Luck. The support I get from NAPA is incredible.”

“Giving Back is Truly the Best Feeling”

Marc Gable of the NAPA Sales Team visits the shop regularly. He said, “Adam’s been all-in with NAPA since the introduction was made as a result of the donated lift. I met Adam in November when my job with NAPA brought me to Oklahoma City and we’ve become friends. Adam provides a great service and NAPA helps him out in whatever way we can.”

Ely said, “NAPA has offered to send my wife and I to the NAPA EXPO in February. The people at NAPA Headquarters, NAPA Oklahoma City, and my local NAPA store support what we’re doing here. Knowing they’re behind me makes me feel great, and even a little important. Hard Luck Automotive Services operates purely on the generosity of others. Being able to give back to the community is truly the best feeling. NAPA helps make that possible.” 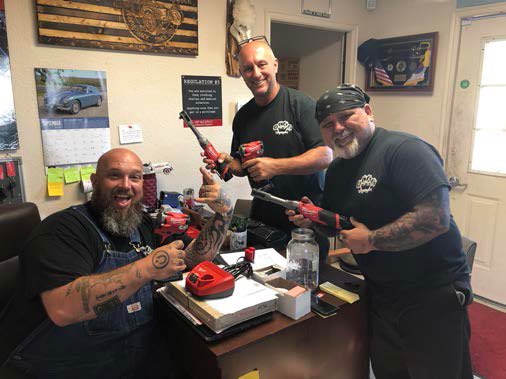 Adam Ely is a former paratrooper and helicopter mechanic for the United States military who started Hard Luck Automotive Services, a nonprofit automotive repair service in the Oklahoma City area, in 2017. He got the idea for the shop after fixing a car that belonged to a friend of his daughter’s. Afterward, he realized how much he saved her since she didn’t have to pay for labor. He and his wife Toni discussed doing the same for others on a full-time basis so they opened Hard Luck Automotive Services.

It didn’t take long for the word to get out. At the beginning, Ely made house calls in his truck. To help pay for tools, gasoline, and oil, the couple started a Facebook page to raise money through the sale of t-shirts and other items.

One of the clients he helped nominated Ely and Hard Luck Auto for Mike Rowe’s Returning the Favor, a reality web television series featuring people who give back to their communities. Rowe came to Oklahoma City in June 2019 to film the show and presented Ely with a two-year lease on his current shop.

Along with Ely, Litahni “Shawshank” Shawhan and Monte Huffman are also retired veterans who donate their time for the cause. The team stays incredibly busy, typically diagnosing and repairing vehicles for 25-30 clients a week.

The help Ely gives to those in need at Hard Luck Automotive Services has inspired others in Tennessee, West Virginia, and California, to provide similar services. “The word is spreading,” he said. “And I’m happy to help.”

The 2-year lease on Hard Luck’s current shop expires in April 2021, so Ely is now looking for a new, permanent home for the nonprofit. For more information, visit hardluckauto.org.