Your high beams are incredibly useful once you leave the lights of the city behind and find yourself driving in areas where the only illumination is coming from the moon. Leveraging ultra bright lighting is great in 90 percent of night-driving situations, but it’s that last 10 percent that can cause problems for anyone who’s used to hitting the high beam switch out of instinct. 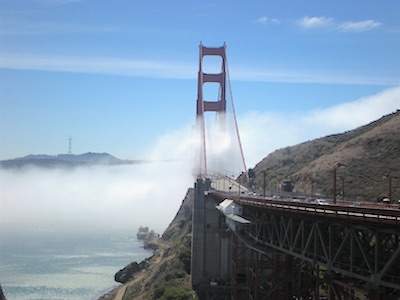 A perfect example of when high beams can make a low-visibility driving experience even worse is when the meteorological conditions create fog over the road. Fog is essentially water vapor suspended in the air and, as a result, it does a great job of refracting light, distorting it and reflecting it back at you. In effect, this creates a wall of glare immediately in front of your windshield and actually makes it more difficult to see than when you had your low-beam headlights on.

The secret to driving through fog safely? Fog lights. Many new cars have them as standard equipment, but they are easy enough to add to almost any vehicle. Fog lights sit low on your bumper and aim their illumination underneath the area where the fog is hovering, providing a clearer view of the road ahead without the blinding effect of using your high beams.

Fog isn’t the only weather that will render high beams more of a hindrance than a help. If you encounter heavy snow while driving at night, you’ll have to resist the urge to blast your high beams for many of the same reasons. The white color of snow, combined with the ice crystals that make up its structure, means that it does an excellent job of reflecting light. The heavier the snow gets, the better your high beams will be at picking out each individual flake rather than highlighting the roadway.

In hard rain you may notice a similar effect, although liquid isn’t quite as effective a reflector as snow or fog. Once again, the best thing to do is to focus the light as low as possible so that it doesn’t hit your eyes with quite as much glare — whether that be by leveraging fog lights or sticking with your low beams.

Keeping the lights low can help you make it through the storm safe and sound. There’s no need to reach instinctively for the high beam switch as soon as it gets dark, so make sure to evaluate the conditions around you first.

Check out all the lighting parts available on NAPA Online or trust one of our 17,000 NAPA AutoCare locations for routine maintenance and repairs. For more information on high beams, chat with a knowledgeable expert at your local NAPA AUTO PARTS store.