Your engine’s accessory drive belt is tasked with a lot of responsibility. Not only does it have to connect several spinning pulleys at the front of your motor and keep them moving quickly enough to power important components like the alternator, the water pump and the power steering pump, but it also has to do so in weather that ranges from 20 degrees below zero to a scorching 120 degrees. The drive belt must do all of this while dealing with under-hood heat, rain and rocks being kicked up from under the car and the constant strain of being in motion.

It’s understandable, then, that no belt lasts forever. Let’s take a look at the most common reasons this crucial engine part fails.

Heat Is the Enemy

As hot as it might get outside, you can bet that it’s significantly more toasty under the hood of your car. With all of the engine heat that’s being thrown off while you drive, and not a lot of ventilation, the drive belt (sometimes known as the serpentine belt due to how some belts snake through all of the pulleys) is essentially baked alive with each passing mile. The rubber used to manufacture this belt is designed to resist heat as best it can, but over a long enough period, it will eventually dry out and begin to crack. 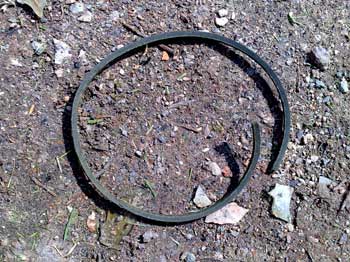 Friction is the next most common drive-belt killer. Since it’s always in motion, the belt itself is constantly rubbing up against the pulleys it runs on, and this can eventually cause a belt to fray — especially at the edges. A fraying belt is weaker than it was designed to be, which makes it more likely to snap or stretch.

Have you ever spilled engine coolant under the hood? Make sure you didn’t get any on your belt, because it’s a surefire way to make it start squealing. This can be irritating to the point of having to replace the belt, because it’s not always easy to clean off antifreeze once it’s embedded in the belt itself.

Keep an Eye on It

The best way to determine when your belt needs to be replaced is by way of a visual inspection that checks for cracks, wear and fraying at least once a year. You can also listen for squealing sounds that indicate the belt is slipping or watch for any dips in alternator output (such as dimming lights or a charge system message) that could mean the belt isn’t gripping the pulleys as tightly as it needs to.

Drive belts do a lot of hard work for your vehicle. Make sure to check them annually and replace them before they wear out.

Check out all the belts and hoses available on NAPA Online or trust one of our 17,000 NAPA AutoCare locations for routine maintenance and repairs. For more information on drive belts, chat with a knowledgeable expert at your local NAPA AUTO PARTS store.

NAPA Know How Blog How And Why Does An Engine Accessory Drive Belt Fail?