Automakers use several strategies to squeeze more miles per gallon out of cars and trucks. Logically, smaller engines deliver better fuel economy, but smaller engines develop less power, which can be significantly less fun and even dangerous in certain situations, such as on highway on-ramps. Turbochargers are one way to get more power out of a smaller engine, but what is a turbocharger and how does a turbo work?

A Pump for the Pump

The internal combustion engine’s power output is dependent on several factors, such as design and management, but the most critical factor is how much oxygen and fuel it can combust. It’s easy to see how a 350-cubic-inch (5.7-liter) Chevy V8 could outpower a 1.8-liter Toyota i4 engine by displacement alone. With nearly twice as much displacement, the Chevy produces three times the power, with up to 370 hp from the V8 versus just 123 hp from the i4. On the other hand, an experimental 1.5-liter Nissan i3 engine positively blows them both away with a whopping 400 hp, but how?

The key is the turbocharger. A naturally aspirated engine, like the Chevy V8 or Toyota i4, relies on ambient air pressure to push air into the cylinders as the pistons go down. At sea level, this is about 14.7 psi. No matter how much fuel you add to the mix, you can never extract more power than what’s made available by the oxygen in that 14.7-psi charge, but what if you could put more air in the cylinder without making the cylinder bigger? How does a turbo work to do this?

How Does a Turbo Work? 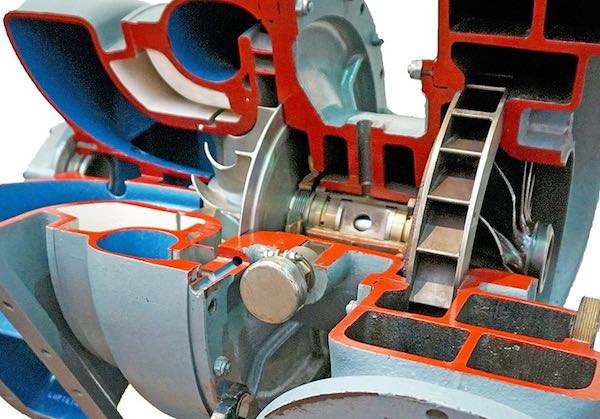 On turbocharged engines, as with the Nissan experiment, the turbocharger compresses the intake air before it can get to the cylinders, up to 10 psi. Instead of compressing 14.7-psi air, the pistons compress 24-psi air. For the same cylinder volume, adding about 40% more oxygen results in about 30% more power output. Thus, a smaller engine delivers better cruising fuel economy but extra power when it’s needed because of the turbo.

Turbochargers are connected to the intake manifold and the exhaust manifold. Two impellers are connected by a shaft, lubricated and supported by oil pressure. At high enough engine speeds, the impeller in the exhaust stream spins up, driving the intake impeller up to 150,000 rpm in the intake manifold. Intake air is compressed by the rapidly spinning impeller and forced into the cylinders under pressure. The oxygen-rich air charge is ready for an extra dose of fuel to deliver greater power. Because spinning up the turbo takes time, which is called turbo lag, some automakers fit electric motors to spin them up earlier.

Turbochargers are no longer limited to sports cars and big trucks. In fact, they’re found even on economy cars. Maintenance is more important than ever to keep them running well. Because turbocharger impeller shafts depend on oil pressure, regular oil changes and quality engine oil can help prevent premature failure and leaks. Clean air filters can prevent wear and damage from abrasives, which is critical in consideration of high impeller speeds. Finally, on turbocharged engines, always idle the engine a few minutes before shutdown to cool the system and prevent varnish deposits and premature bearing or shaft failure. Of course, if your turbocharger fails, you can get a new or remanufactured turbo to replace it.

Check out all the lubricant products available on NAPA Online, or trust one of our 17,000 NAPA AutoCare locations for routine maintenance and repairs. If you’d like to learn more about turbos, chat with a knowledgeable expert at your local NAPA AUTO PARTS store.

NAPA Know How Blog How Does a Turbo Work?