Joe and JoLynn Wallick, owners of Mountain Auto Parts in Cle Elum, Washington, recently spearheaded a community fundraising effort for their next door neighbors, Zack and Mickaela Peppler, whose son is battling cancer. They’ve helped raise over $28,000 for the family through the sale of pumpkins, a spaghetti dinner and auction, and cash donations from local businesses.

In early May, 9-year-old Lee Peppler was diagnosed with Ewing sarcoma, a rare type of cancer that occurs in bones or in the soft tissue around the bones. Fortunately, when the cancer was discovered it hadn’t spread and Lee was otherwise healthy, so the prognosis is good. At this time, Lee is approaching the end of 32 weeks of treatment which has included chemotherapy, blood transfusions, and radiation at Children’s Hospital in Seattle.

During most of Lee’s course of treatment he had to be within an hour’s drive of the hospital which meant the family has had to “live” in Seattle during much of the past seven months. The Ronald McDonald House that typically provides a place for families to stay while their child is undergoing treatment is closed during the pandemic. So the money raised is helping to defray expenses like housing and other costs not covered by insurance including meals, travel, and more. 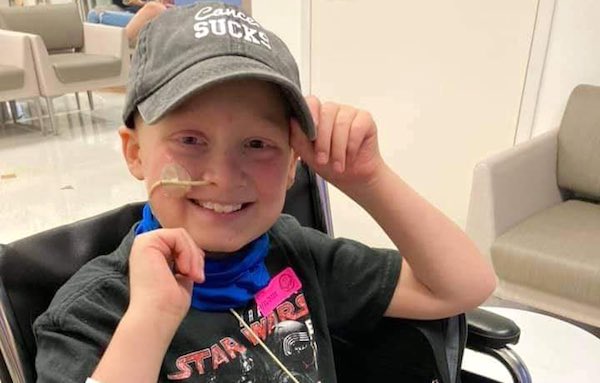 The Wallicks came up with several ways to raise money for Lee and his family. Their biggest fundraising efforts have been selling pumpkins in early October and organizing a benefit dinner. Each fall, Chuck and Jane Wallick, Joe’s parents, donate the pumpkins they’ve raised for a fundraiser that supports the youth basketball organization their grandchildren are involved in. Since there is no basketball during COVID, they donated their approximately 1,500 pumpkins to the “Pumpkins for Lee” fundraiser and even held the event in their own front yard. Even more pumpkins, gourds, fresh produce, and bales of straw, donated by local businesses, were all for sale.

JoLynn said, “We sold out of pumpkins in under three hours and by the end of the afternoon, everything was gone!”

“Some people even came by just to donate cash instead of buying a pumpkin which was awesome,” said Joe. “We raised about $13,000 that day alone.”

The next event was a bene t spaghetti dinner, particularly challenging during a pandemic. Joe explained, “We made sure we followed all the CDC and health department guidelines. A local restaurant offered to close completely that evening in order to host the dinner. We limited the event to 60 people. Temperature checks and masks were required among other safety precautions. Between ticket sales and 60 local businesses donating, the spaghetti dinner event raised just over $10,000.

One of the simple things the Wallicks have done is put a collection can with a picture of Lee and his story, at the counter in their NAPA store.

“Every time we empty it, we’re surprised at how much cash we find inside. Amazingly, there’s been about $200 donated each month just from those cans alone. The amount of money we’ve been able to provide the family has just blown us away,” said Joe. “And the Pepplers are so grateful to our community.”

Commenting on the Wallick’s efforts in a Google review, Carlene Dunham wrote, “The owners of NAPA are some of the kindest, most generous people I’ve ever met. Without Joe and JoLynn this fundraiser for a local boy fighting cancer would never have happened. Through NAPA’s generosity coupled with our amazing community, the precious boy and his family were able to receive an amazing monetary gift to help ease a few of the struggles they’re facing. NAPA is top notch with hearts of gold.”