As temperatures drop or soar, a very important liquid is at work in your car to help keep it running at the right temperature. Known traditionally as “antifreeze” and sometimes thought of as “coolant,” this fluid runs in a circular pattern under the hood to maintain the temperature for key components, especially the engine. Without coolant, your car would overheat and stop running. Moreover, your engine might get so hot that the engine block could crack or a head gasket might blow, so here’s how engine coolant protects your engine.

Next, the fluid enters the engine where it removes combustion-generated heat, then it moves through the heater core, the unit that supplies heat to the vehicle’s cabin. Finally, the coolant returns to the radiator where the heat is jettisoned into the surrounding air. The cycle repeats itself as long as the engine is running or the water pump is activated. 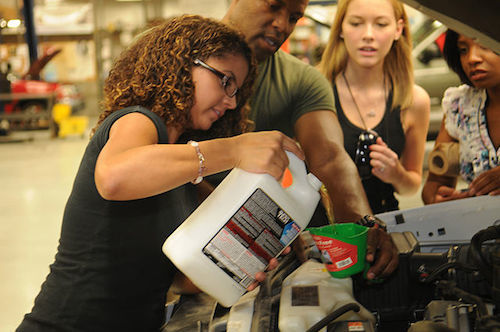 Under typical ambient conditions, water mixed with corrosion inhibitors would be sufficient to cool the engine and supply heat to the cabin. But it’s in extreme weather conditions where another agent is required to get the work done. Water alone cannot stop a car from freezing or an engine from boiling over. Today’s formula for antifreeze will keep cars from overheating, and this is why it has become interchangeable with the term “coolant.”

When properly utilized, the solution lowers the freezing point of a water-based liquid. Likewise, it also raises the boiling-point elevation. Thus, your engine can operate just fine in temperatures well below the freezing mark. With antifreeze, it can also handle the high temperatures produced by the engine core as well as the high air temperatures that can compound the problem. The radiator cap seals the entire cooling system allowing it to operate under pressure, thus further raising the boiling point of the coolant.

Over the years there have been several different types of coolant used in automobile engines. The first coolant was simply water which worked okay for the most part. But as previously mentioned there are problems with plain water freezing and boiling under not so extreme conditions. Next up is Inorganic Acid Technology (IAT) coolant which was the green antifreeze everyone thinks of and was used for decades. It is still common and can be found in many vehicles built before 1990. One downside of IAT is that it should be flushed every 30,000 miles or every two years, whichever comes first due to a tendency to become acidic. Next on the market was Organic Acid Technology (OAT) which doesn’t need to be flushed as often thanks to the acid inhibitors in the formula. OAT coolant became popular with manufacturers due to its long lifespan. The newest formula on the market is Hybrid Organic Technology (HOAT), which as it sounds is a hybrid mix of IAT and OAT technology. HOAT coolant can keep an engine cool while also keeping corrosion away and lasting up to five years. Learning that HOAT is a hybrid between IAT and OAT may make it sound like you can mix them all together, but that assumption would be wrong. It’s best to keep coolant types separate and never mix them. For the racing crowd there is even waterless coolant that uses a glycol based liquid (and no water) that can withstand boiling up to 375 °F, but the cost is quite a bit more than a gallon of normal coolant.

Just as you need to change your motor oil, brake oil and transmission fluid because of degradation, engine coolant will also degrade. At some point the fluid may no longer get the job done, effectively putting your car at risk of breaking down. Antifreeze is composed of ethylene glycol, and that ingredient never wears out.

What the corrosion inhibitor ingredients that prevent the metal parts from rusting can wear out, and this effects the water pump and engine block. The coolant can also pick up debris and contaminants over time. Fortunately, spent coolant is easily identified visually — a rusty or brown color indicates that the system must be flushed and the coolant replaced.  Old coolant should be collected and disposed of properly, as it is poisonous and deadly to animals that may drink it due to the sweet taste.

Check your owner’s manual for guidance on how to change or fill the antifreeze. New antifreeze is typically sold as a 100 percent solution, but it should be mixed evenly with distilled water to create a 50-50 blend. Yes, you can also buy a pre-diluted solution featuring a 50-50 blend. When in doubt you can check your coolant using a hand-held tester to gauge the freezing point. There are also convenient coolant test strips.

If temperatures in your area regularly drop to minus 34 degrees Fahrenheit, then a 60-40 or 70-30 antifreeze to distilled water ratio is necessary. Again, check your owner’s manual for your vehicle’s exact mixing specifications.

As far as coolant colors go, its coloration has no bearing on its effectiveness. Indeed, manufacturers use various dyes to achieve coolant color, although the pink and orange colors point to organic acids used instead of the silicates and phosphates found in the most common green coolant. Just to be safe it is best to never mix antifreeze colors together.

Check out all the chemical & lubricant products available on NAPA Online or trust one of our 17,000 NAPA AutoCare locations for routine maintenance and repairs. For more information on how engine coolant protects your engine, chat with a knowledgeable expert at your local NAPA AUTO PARTS store.